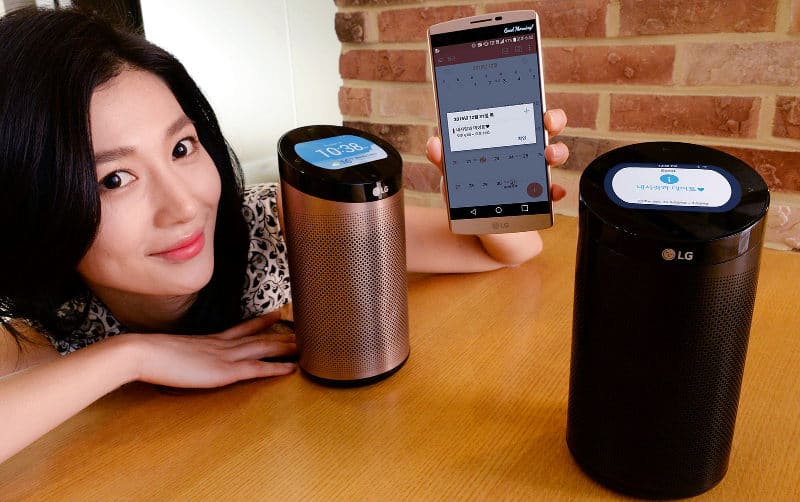 Not too long ago at IFA in Berlin, LG debuted a device called the SmartThinQ Sensor that allowed you to monitor and control the various smart appliances in your home. This was all done via an app for your smartphone that displayed what the sensors were picking up and allowed you to make changes as you saw fit. A new product, called the SmartThinQ Hub, is set to serve as a stand-in for your smartphone and then some, collecting all this info in an easy to digest format and giving you a central hub to control everything.

This is done through your smartphone, though the announcement did not specifically mention a lack of voice control, leaving that as a distinct possibility. Thanks to partnerships with other manufacturers and the AllJoyn Alliance, an open source framework for smart and IoT devices, the new hub will not only be compatible with anything the SmartThinQ Sensor could hook into, but will also allow you to view data from and exert control over just about any modern smart device that's compliant with AllJoyn standards. That means that just about any device connected to a SmartThinQ sensor or that can connect to the hub via Bluetooth, Wifi or Zigbee , a fairly new connectivity standard mostly used in IoT, is fair game.

The device is a fairly simple metal cylinder bearing a large speaker that takes up most of its body. The cylinder, just a hair taller than an LG V10 smartphone and about as wide, is topped by a tilted LCD display of 3.5 inches. It has not been stated as of yet whether this display is touch-sensitive. The tilted display, made to be easy to see, shows current data and notifications from your smart devices. The same data can be mirrored to your smartphone through the relevant app, which is also used to control the devices. This new hub is a step toward LG's vision of an "IoT Ecosystem" in the home that connects and allows central control for just about everything in your home from the air condition to the lights and the TV. The device is expected to be trotted out for the public to see, complete with more details of its operation, at January's CES trade show.