Letv’s smartphones are extremely popular in China, and the company is slowly, but surely, expanding their reach. This China-based company has already opened their online store in the U.S., called LeMall, but only Letv’s accessories are available there at the moment. Well, that’s about to change soon considering this company plans to announce smartphone availability in LeMall US during CES 2016 next month. Letv will either announce the availability of their already released devices, or plan to announce a completely new smartphone.

Speaking of which, Letv’s Le Max Pro device has been leaking for quite some time now. This handset will allegedly going to be powered by the Snapdragon 820 processor, and has already been benchmarked by AnTuTu. The phone has allegedly scored 133,000 on AnTuTu, which is quite impressive, and now we have some additional info to share with you. According to a leaked listing which popped up on Weibo, the Le Max Pro might actually sport Qualcomm’s Ultrasonic Fingerprint Scanner which we’ve talked about quite a few times thus far. This tech would allow Letv to implement a fingerprint scanner into the display itself, which sound great, of course. That’s not all however, according to the leak, the phone will also ship with the Wi-Fi 802.11 ad standard, which allows data throughput speeds of up to 7Gbps. The vast majority of high-end devices nowadays feature support for Wi-Fi 802.11 ac, so this is definitely commendable, if true, of course.

The Letv Le Max Pro will reportedly feature a 6.33-inch QHD (2560 x 1440) display along with 4GB of LPDDR4 RAM and 32/64/128GB of internal storage (UFS 2.0). This phablet will be fueled by the Snapdragon 820 SoC, and a 3,400mAh battery will be available on the inside. The dual-SIM capability will also be a part of this package, as will 4G LTE connectivity. The 21-megapixel shooter will be available on the back of the Letv Le Max Pro, and its front-facing shooter will sport a 2.0um pixel size sensor, allegedly. According to the leaked info, the device will ship with Android 6.0 Marshmallow out of the box with Letv’s EUI skin on top of it. 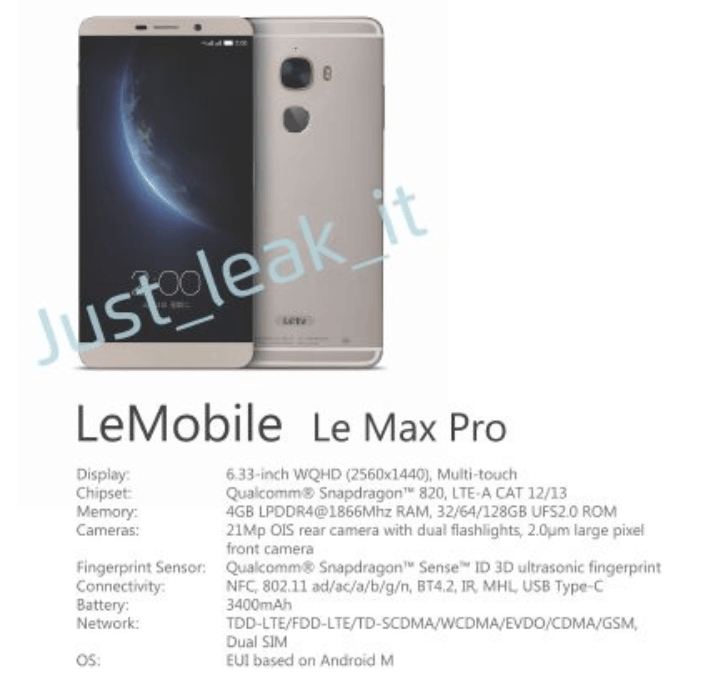