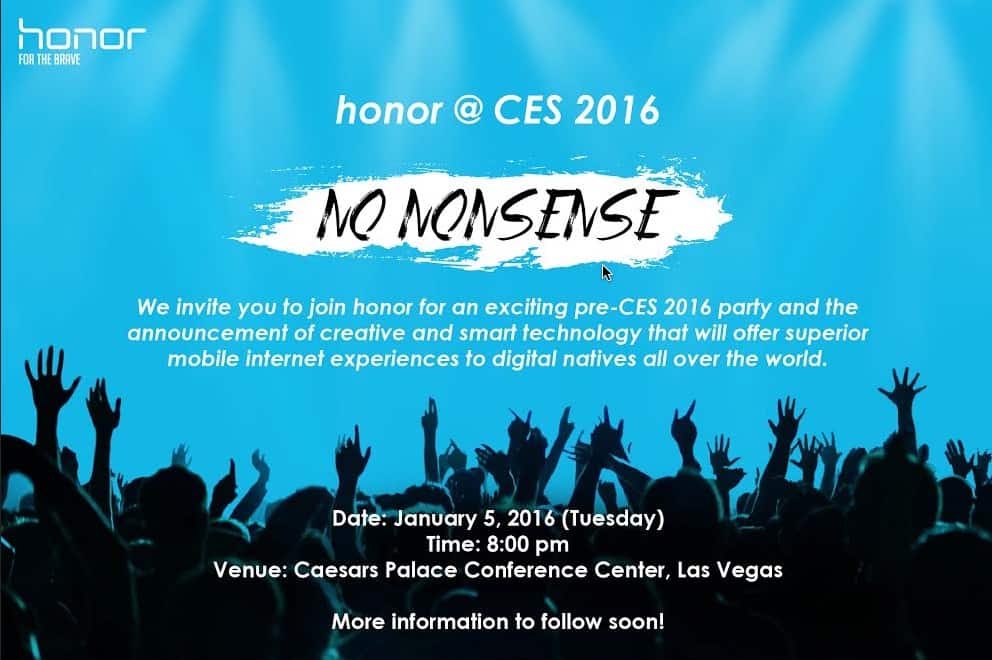 The Consumer Electronics Show (CES) 2016 is almost upon us, and many consumer technology companies are gearing up to show off what they've got lined up for the year. As with every year, the event is scheduled to take place in Las Vegas, Nevada, and like many other companies, Chinese multinational networking, telecom equipment and consumer electronics manufacturer, Huawei Technologies, has big plans for the event. The company unveiled the Honor 6 and 6 Plus smartphones at CES 2015, and this time around, has scheduled not one but two press conferences, at least one of which has apparently to do with the unveiling of a new device and/or technology as part of its 'Honor' sub-brand that has apparently been doing exceedingly well in Europe in recent times.

Coming to the company's plans for CES 2016, according to an invitation sent out to media outlets on Wednesday, the company will unveil something that will be both 'creative' and 'smart'. But that's all the company has let on thus far. While the show officially starts on the 6th of January, Huawei's presser is scheduled for the previous evening at 8 PM, and will take place at the Caesar's Palace Conference Center. From the wording of the invitation meanwhile, it isn't immediately clear as to what exactly will be in store for the delegates attending the event. The memo simply reads, "We invite you to join honor for an exciting pre-CES 2016 party and the announcement of creative and smart technology that will offer superior mobile internet experiences to digital natives all over the world".

It bears mentioning here that Huawei had previously sent out yet another invite for an event scheduled for the morning of the same day, where the company will apparently launch its "newest portfolio of devices". Huawei of course, as mentioned already, has been enjoying pretty much its best days as a smartphone manufacturer in recent times. Its Honor brand in particular, has been instrumental in lifting both the fortunes as well as the image of the Shenzhen, Guangdong-based company of late. Having been chosen by Google to manufacture the flagship Nexus 6P smartphone earlier this year was yet another feather in the cap for Huawei. It remains to be seen what Huawei has in store for tech enthusiasts come CES 2016, but with Samsung, Sony, Asus, Misfit and a whole host of other tech companies already having confirmed their participation for the event, technology aficionados can only hope for an exciting 2016 ahead of them.