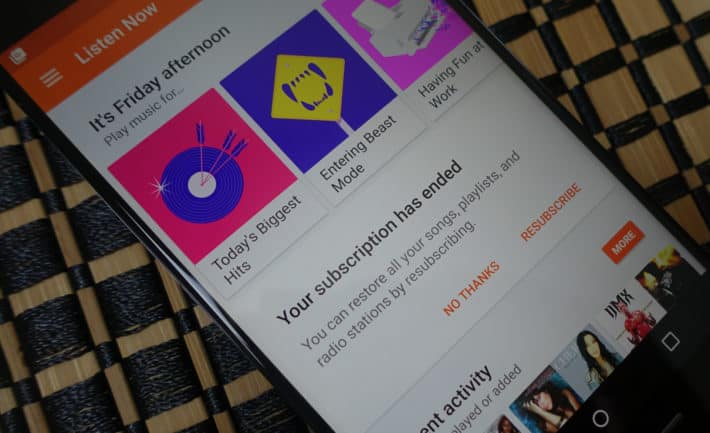 The current state of the music industry might not be what artists would like, but still, music streaming services are here to stay. There are many companies offering this kind of services, so each of them is looking for ways to differentiate from the rest. Last summer, Google acquired a music service called Songza, which specialized in music recommendations and playlists for various situations, which were made by experts. Songza is still available in the US and Canada as a standalone service, but it will be fully integrated into Google Play Music early next year. For those Canadian users who appreciated this service, Google Play Music will add a new feature to make the transition a little easier.

Google Play Music now includes a free, ad-supported streaming service in Canada, so users can get many playlists from a variety of genres to suit whichever mood they're on. Google tries to create better playlists by hiring people with music knowledge and an ample criterion to put their own preferences behind them and think of what people might actually like. This group of experts include some Canadian team members, of course, and they will select every song that goes into the various stations. Users can browse these stations by genre, mood, decade or activity and if they search for artists or songs, an automatic station will be generated, providing similar music.

Podcasts will also be available, and users will be able to search by their interests, perhaps they would like to learn something or they might just want to have a good laugh listening to one of them. This is great news for podcasters as well, as millions of Android users will now have access to their audio creations. Podcasters will soon be able to upload their content, so users can start listening to it as soon as the service launches. This content will receive a similar treatment to the one for the music service as users will get recommendations based on their mood or interest. For those who decide to subscribe to Google Play Music, they will get these benefits without the ads, plus offline playback, the ability to create their own playlists and listen to each of their 30 million songs in any device as many times as they want. Let's remember that this subscription also gets the benefits of YouTube Red and up to 50,000 songs of their own collection can be stored even without a subscription.