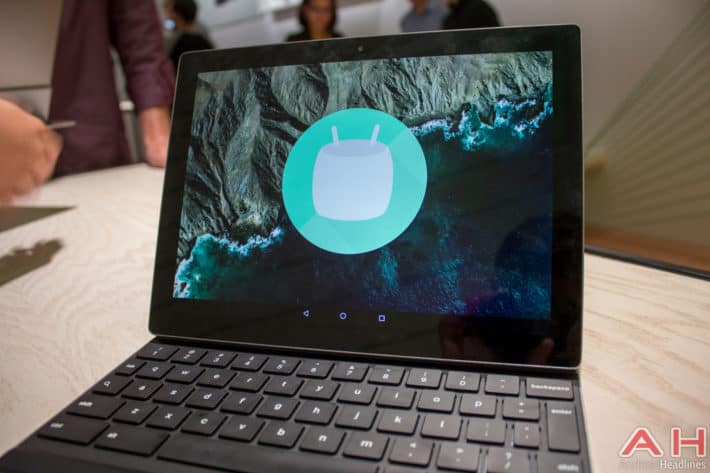 Google announced the Pixel C as something of a surprise during the same event they said hello to the Nexus 6P and Nexus 5X at the end of September. Since then however, things have been relatively quiet on the Pixel C front, with it beginning to look like it could have been pushed back in to 2016. That isn't the case as the Pixel C has hit the Google Store this week for a sizeable $499. Back when it was original announced, Google was fairly quiet on what was on the inside of their new Chromebook Pixel-inspired Android tablet. Now, they've come clean.

The main attraction of the Pixel C is of course that 10.2-inch display, which comes with a resolution of 2560 x 1800, giving it a density of 308 pixels per inch. It's an LTPS LCD panel with 500 nits brightness, in-cell touch and an interesting aspect ratio that works out at the square-root of two. This makes the Pixel C feel like a piece of A-size paper in the hand. Underneath this display, we're looking at an NVIDIA Tegra X1 processor, which is a 64-bit octa-core CPU with four Cortex-A57 cores for heavy-lifting as well as four Cortex-A53 cores for lighter work. The Tegra X1 also features a Maxwell GPU as well, giving the Pixel C excellent graphical grunt. This is backed up by 3GB of LPDDR4 memory as well as 16 or 32GB of storage. Elsewhere, there's an 8-megapixel rear-facing camera, a 2-megapixel front-facing camera and four microphones for precise audio recording and video calls.

As far as connectivity goes, the Pixel C supports 802.11 a/b/g as well as n/ac in both single and dual-band with 2×2 MIMO, Bluetooth 4.1, USB Type-C and a 3.5mm output for audio. Where power is concerned there's a 6,840 mAh battery and a 15W Type-C adapter included. We got to spend some hands-on time with the Pixel C earlier on in the year, and those that want to get their hands on their own, can do so via the Google Store right now, but at $499 this isn't the Nexus 7 price many were hoping for.