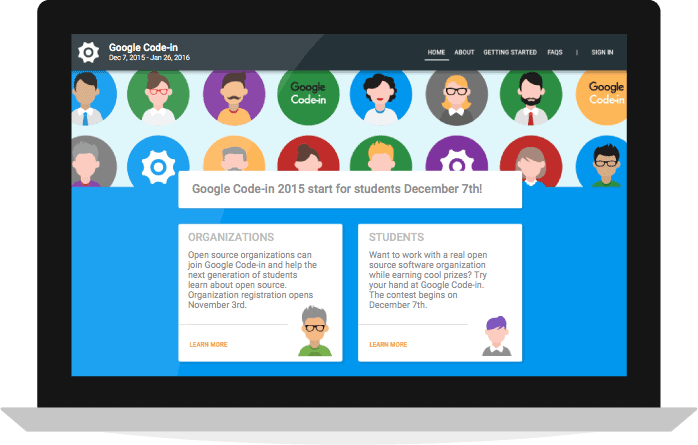 When it comes to programming and looking for the developers of tomorrow, Google is a company who knows how important it is to encourage such skills early on. This is probably why the company yesterday announced the launch of their annual Google Code-In. For those unfamiliar with the program, this is an opportunity for youngsters to get involved with coding and developer (or learn) new CS skills. The program is essentially sponsored by Google and is open to youngsters from around the globe.

The way the program works is that over its seven week duration, youngsters can take part in various coding challenges. These are real software projects and span various areas including "documentation, coding, training, research, quality assurance, user interface and outreach tasks". The students can pick the area they are most interested in learning about or developing and take part in the area's respective tasks. Each task has a dedicated mentor who is specifically assigned to it and is on-hand to provide feedback on student's completed work, as well as provide guidance if and when needed. All the tasks are provided as open source tasks and are put together by fourteen organizations, which were hand-picked by Google and who have already assisted students in Google's other development and training programs and most notable, 'Google Summer of Code'.

To take part in the Google Code-In, you or your child does need to be of pre-university student age which Google defines as aged between 13 and 17. If you or your child falls in to this age group then you will will need to head over to this site which is the contest entry site. From here you will be able to register your interest and join the program. The contest began yesterday (December 7th) and will run through until January 25th, 2016. According to Google, over the last five years, Google Code-In has resulted in the completion of 12,495 open source tasks by 2,233 students from 87 countries. So it does seem that this is a tried and tested measure and a great opportunity for any youngsters who are interested in getting more involved with coding over the Holiday period.