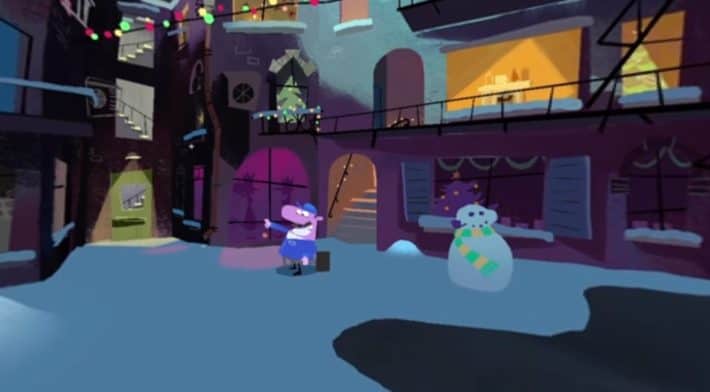 Google's Spotlight Stories, special interactive videos that hit select devices back in May and the iPhone in July, are coming to YouTube. The Motorola-developed storytelling experience began as a plaything of Motorola Mobility's Advanced Technology And Products, but met with critical acclaim upon release. This newest version of the lauded video series comes to YouTube for almost all devices and boasts 360 degree viewing support and interactivity for certain Android devices. YouTube 360 functionality is on board for all devices, but special touches are reserved for the limited stock of Android devices that full support has been developed for, which should grow with time.

The newest video in the Spotlight Stories series features a short holiday romp by Academy Award-winning studio Aardman Animations. The film, called "Special Delivery", centers around  a man's encounter with a sneaky St. Nick in a fully viewable, 360 degree apartment complex that's a bit on the small side. The two frolic around, with jolly old Santa occasionally playing tricks on his would-be finder or barely avoiding his gaze. Viewers can watch as the two seem to chase each other about as Santa does his thing, with the man after him occasionally catching a glimpse of red suit and getting visibly frightened at its questionable origins. While all this is going on, the viewer can rotate the video for a better look at the landscape. On certain Android devices, small sub-scenes and side plots or quirky interactive set pieces may jump to life when your gaze is turned upon them.

Android users are also able to use Google Cardboard and other VR viewers to view the new content, providing a more immersive experience. Enhanced 360 degree functionality and interactivity is slated to come to iOS as well, though a time frame has not been laid out at this time.  As the list of supported devices and new videos grows over time, it would be no surprise to see these Spotlight Stories setting a new gold standard for video content delivery on mobile devices, furthering the slow push to virtual reality as the primary media intake platform for mobile users.