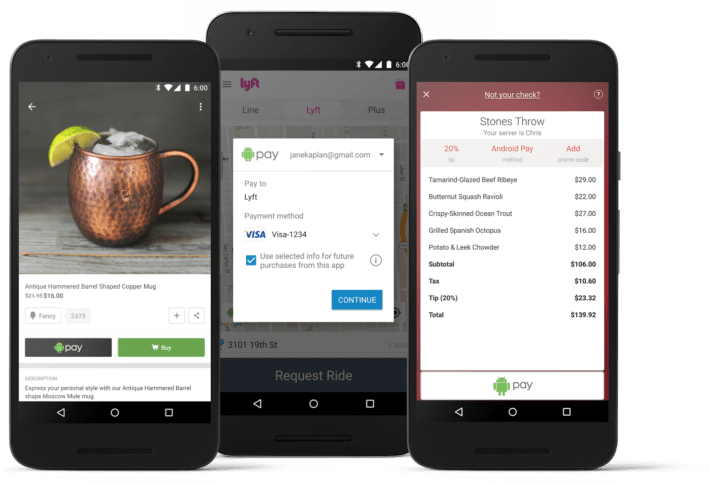 Google's famed mobile payment solution known as Android Pay launched officially earlier this Fall at the beginning of September, and while it's already available for use at a number of retailers, it's still going through a somewhat slow adoption of banking partners, which is limiting the number of people who can currently use it at this point in time. Paying for things with your phone at checkout isn't the only thing Android Pay will let users do anymore, though, and as of today, Google has announced that you'll now be able to make payments for in-app purchases using your Android Pay connected bank card.

The reason for this according to Google will be to offer the same level of simple payment solutions to users who are trying to buy things in apps they use on a day to day basis that consumers get when they use Android Pay at the stores. With Android Pay now supporting in-app purchases, it also means customers can breathe a little easier on the security side of things as they won't have to enter in all of their information into various apps. So long as the apps themselves support Android Pay as a payment option, users will be able to select it, and with their card data already inside of Android Pay, they can avoid having to enter their card information in multiple places.

In addition to this, it also avoids having to pull out your card every single time you want to make a purchase within an app. For the forgetful ones, remembering your card number isn't always the easiest, and now this won't have to be a worry for those people. This also makes it so that card details aren't transferred hands, meaning consumer card data never makes it to the merchant, which is good news for anyone concerned with privacy. While not all apps will support Android Pay as a payment option right away, the list of compatible apps will grow over the next few months, and certain apps like OpenTable and Lyft are already supported and offering special promotional discounts for users for a limited time, with Lyft giving users $10 off rides for using Android Pay (likely for just the first time you use Android Pay) while OpenTable is letting people save $20 on their dining expenses. Other apps which support Android Pay as a form of payment currently are Spot Hero, houzz, Dorrdash, Jack Threads, Fancy, Handy, and more. Beyond this new support for IAP's, Google states Android Pay will be coming to new countries around the globe in 2016, with plans to expand it to Australia within the first half of the year, while they state more countries will be gaining support throughout the year.