One of the biggest selling points for Android is the customization. You can change all sorts of things with other apps in the Play Store, and the messaging app is one of those. There are plenty of them available on the Play Store right now, some good, and some not so good. Let’s have a look at them. 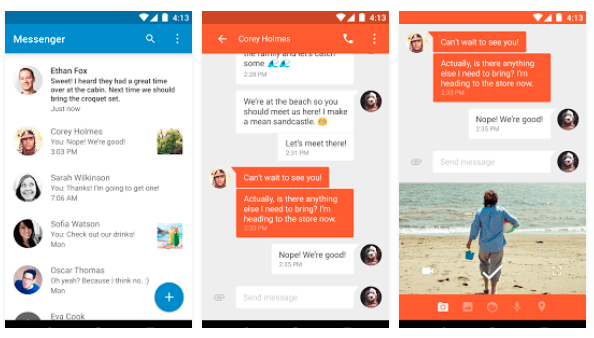 With Android 5.0 Lollipop, Google released a brand new SMS app that is open-sourced, and it’s simply called “Messenger”. It’s a great looking app and works just as great. Each contact gets a different color in the app, pictures are shown in-line and look fantastic, not to mention there is the ability to block SMS senders from within the app, something that not every other messaging app can do. 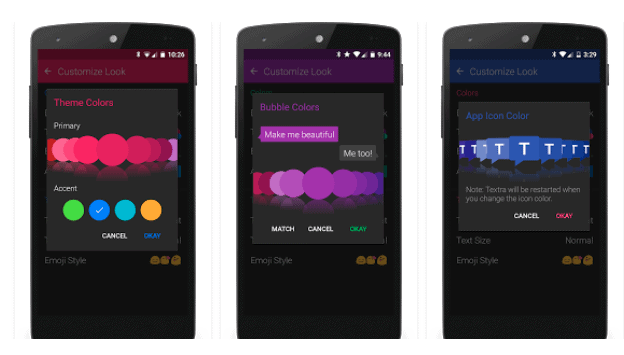 Here’s another great messaging app here that can replace the stock messaging app, It’s Textra SMS. Textra is very customizable, allowing you to go ahead and adjust the colors for each contact that you are messaging, get pop replies, meaning you can reply quickly without leaving the app you are currently in. Textra also has support for Pushbullet, MightyText as well as Android Wear, so you can reply to text messages from your wrist. 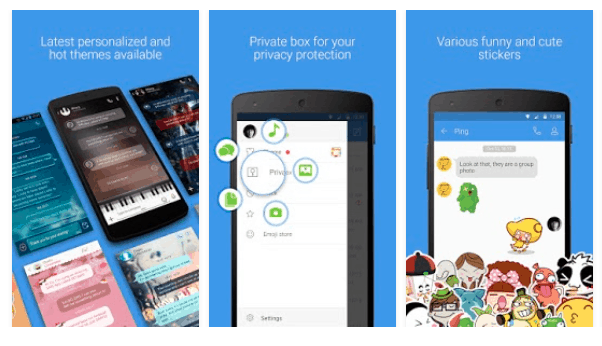 Go SMS Pro is one of those that has been around forever, and it’s still a great text messaging app. Go SMS Pro can also replace the stock messaging app on your smartphone. Go SMS Pro allows you to do all sorts of things, including quick replies. Which are amazing, because it means you can reply to the person that just texted you, without leaving the the app you are currently in.  Additionally, there are a ton of stickers to choose from that you can send. 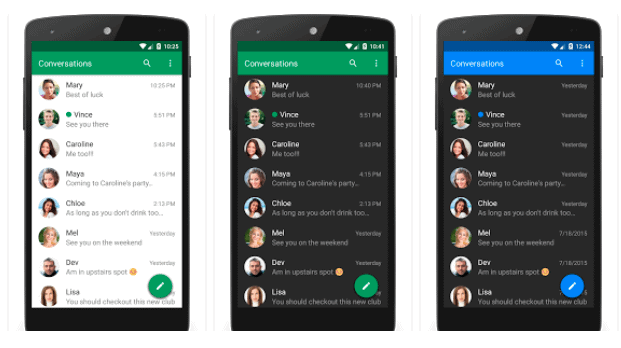 Another very popular messaging app replacement here, Chomp SMS actually has over 10 million users. Chomp SMS does use Google’s material design, so it’s a great looking SMS client on Android. It does have quick reply, which also works with Pushbullet and Android Wear. Not to mention there are over 800 emojis available in the app that you can send to others. The best feature, is likely the ability to passcode lock the app from other users seeing your text messages. 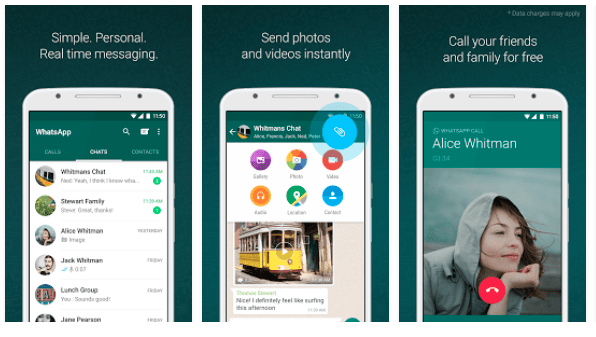 While WhatsApp isn’t a text messaging replacement app, WhatsApp is a great messaging app that you can use to text anyone in the world, for free. WhatsApp is available for Android, iOS and Windows Phone, additionally it also allows you to make calls to anyone without charging you a cent. WhatsApp has all sorts of emojis as well as the ability to record audio to send to other people. 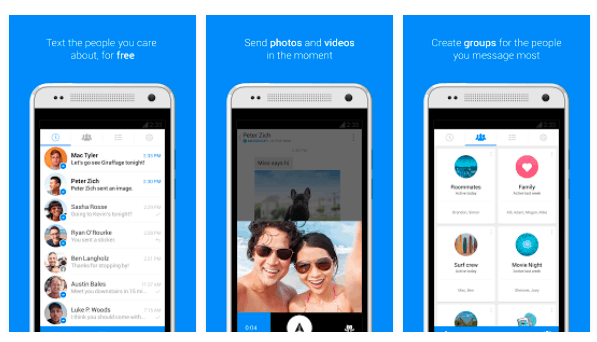 Recently, Facebook Messenger took the role of becoming your SMS client on your smartphone, and also made it available for you to use without a Facebook account. Additionally because it is Facebook Messenger, you are able to message your friends from Facebook with ease. Facebook Messenger has a slew of stickers – with more being added all the time – not to mention everyone’s favorite emojis are still there. 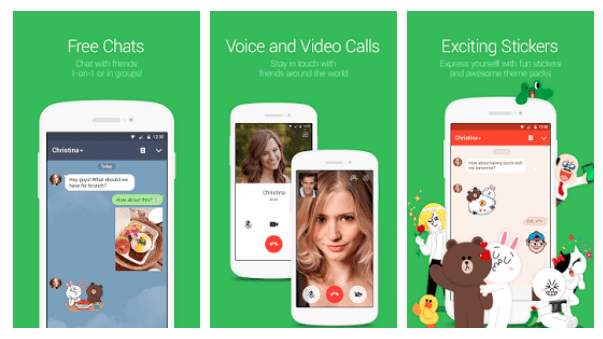 LINE is another very popular messaging app for Android. It is very popular in Asia and in the middle east. With Line you can message anyone that has an Android or iOS device, and it’s all completely free. They also offer free video and voice calls as well as a ton of stickers that you can have fun with sending to all of your friends. They also have over 600 million users around the world. 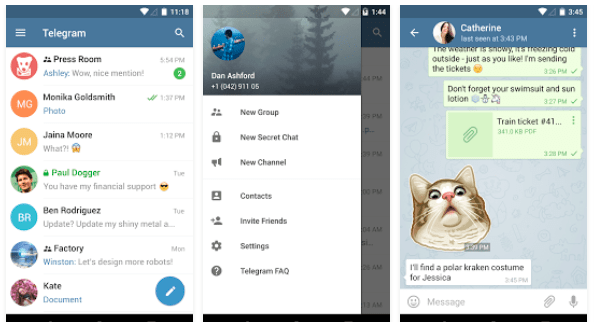 This is another very popular messaging app on Android. Telegram allows you to send messages to your friends for free, but there are also channels where you can join and chat about different things as well. For instance there’s an Android channel that has a ton of people in there just chatting about Android and such. It’s actually a really fun app, and has a great looking take on material design as well. 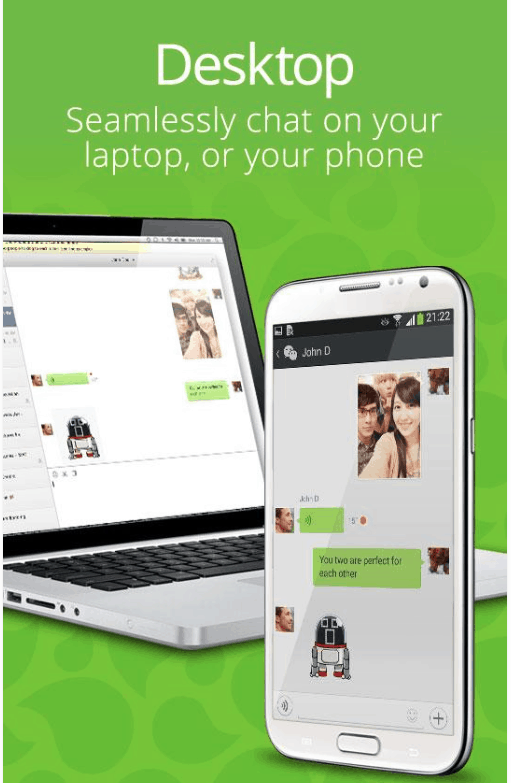 Mostly popular over in China and other parts of Asia, WeChat is a really great chat client available on Android. It’s very popular and has all sorts of features that everyone will love. This includes all sorts of stickers – with plenty more available to download – as well as emojis, you can send audio clips and so much more. It’s a very well rounded chat application on Android. 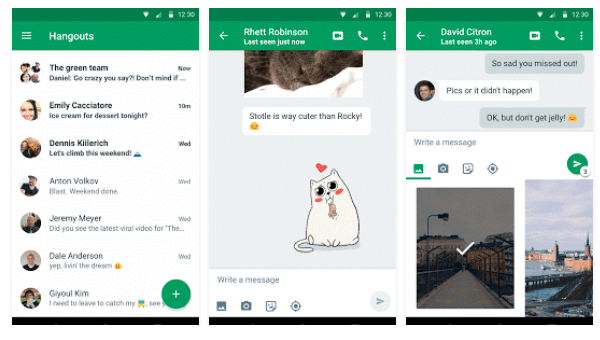 Hangouts launched a couple of years ago as a successor to Google Talk, and it has done quite well. Hangouts works with all of Google’s services, and is part of Gmail or Inbox right now. With Hangouts you can send GIFs to your friends. As well as pictures, and all of that cool stuff. Unfortunately there are no stickers included in Hangouts, at least not yet, but there are plenty of emojis to choose from.