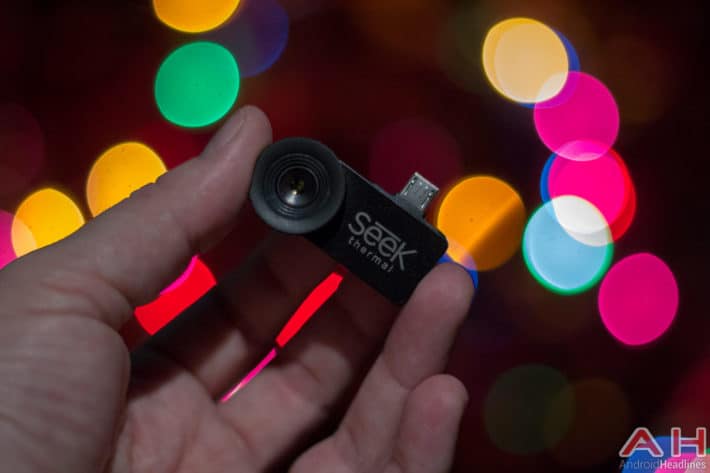 No doubt you've heard of Seek Thermal by now.  They made waves when the Seek Thermal Compact Camera launched a few months ago, and while we got to see it for ourselves at IFA 2015 in Berlin back in September, we've now had one in-house for a while and want to give you the full low down on how well it works.  At first thought, you might wonder who in the world would need a thermal imaging camera? Much less one that connects to your favorite smartphone, but you might be surprised at just how many different ways and situations in which this little thing can be useful. 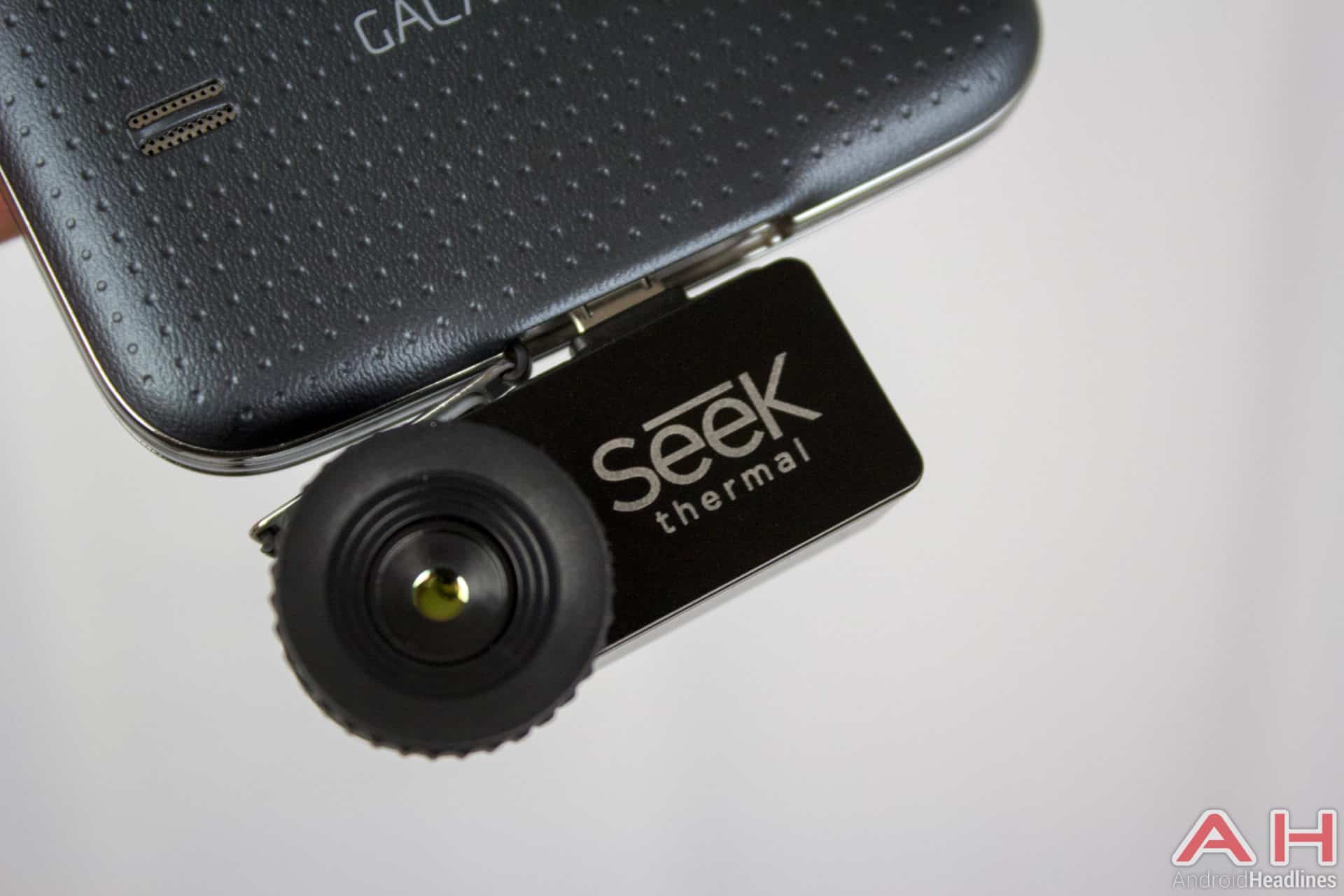 Without the actual thermal camera itself none of this would be possible, how how does the camera itself look?  It's a very small, simple little device with a circular camera lens tucked behind a rotating ring, a rectangular body and a microUSB male plug sticking out of the top.  There's also an iOS version with a lightning connector for those who need it on iOS powered devices, so be sure to pick the right one when you buy it.  Since this is a microUSB port, you're going to either need a phone with a microUSB port who's flat side faces the back of your phone, or you'll need to buy an adapter to flip this port around.  This limits compatibility out of the box but as long as you have an adapter it should theoretically work with any Android 4.3 Jelly Bean and up powered device.  Devices with a USB Type-C cable are out of luck though, as the microUSB to USB Type-C adapter I have didn't make the camera work with my Nexus 6P.  Buyers interested in the device and with a newer phone, will have to wait for an official solution from Seek or a new product altogether.

The camera itself provides is a 206 x 156 resolution image with a 36-degree field of view.  The regular version of the camera has a viewable range of 1,000 ft and is able to detect anywhere from -40 degrees Fahrenheit (-40 Celsius) to 626 degrees Fahrenheit (330 Celsius).  Since it's a thermal imaging solution and doesn't rely on the same light our eyes or regular cameras use to see, this one can see just as well at night time as it can during the day.  If you need further range up to 1,800 ft Seek also sells the CompactXR camera that looks and functions the same way.

The camera itself comes in a waterproof case that can be used to easily carry it with you no matter where you go, however the camera is not able to operate in this case since it's just a storage case.  There's at least a handy little "handle" up top that allows you to connect it to any bag, and thanks to the super tight clip that holds the case together you won't have to worry about it opening up and losing your camera.  I've been mainly using this on the Galaxy S5, although I've tried a Galaxy S3 and it still works just fine.  Both of these are the only phones I have with the microUSB port facing back, so while these are my daily usage devices with the Seek, I have tested it on plenty of others phones and can confirm it works just fine, you'll just need the aforementioned adapters to flip the port around. 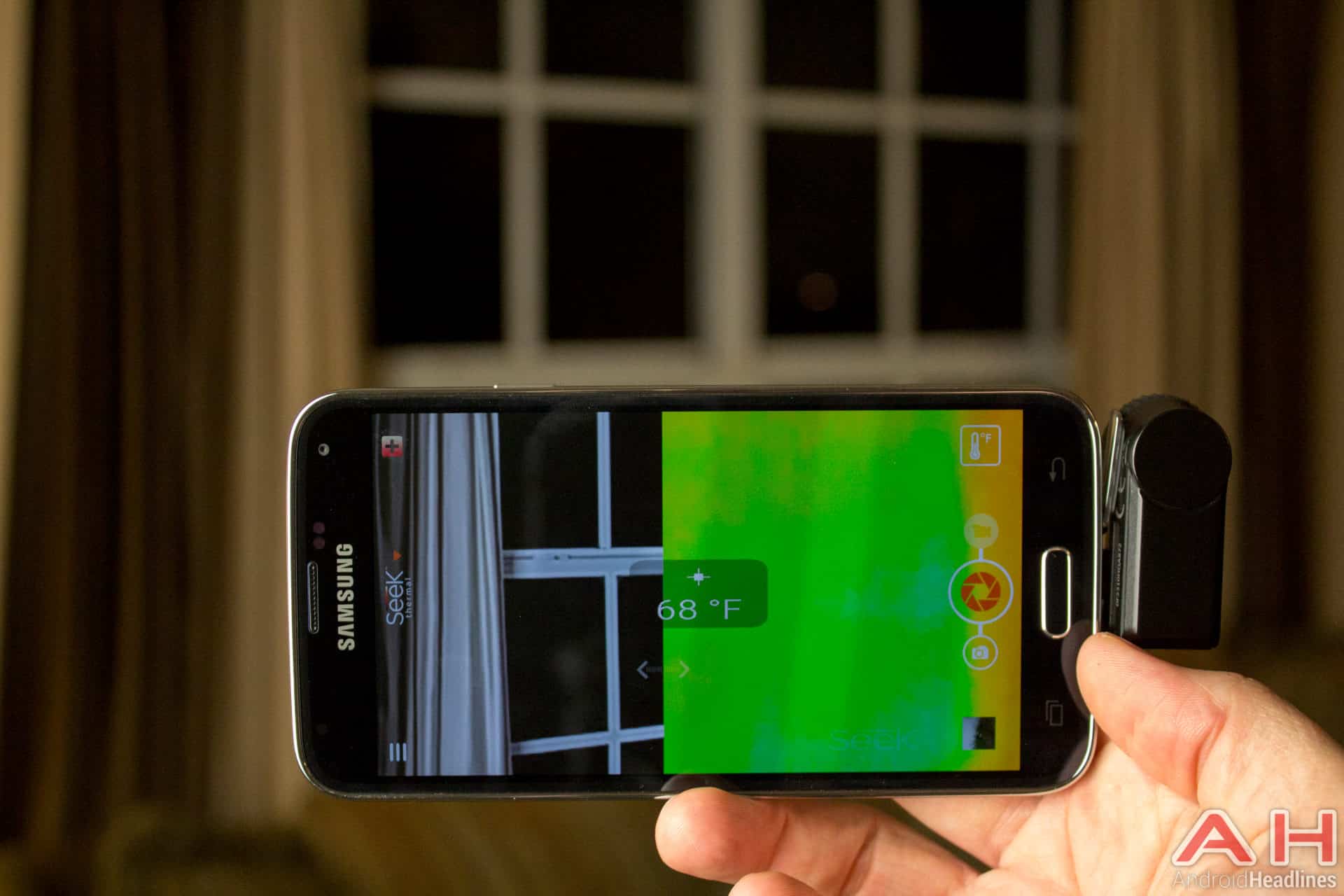 Since this is proprietary hardware it needs equally proprietary software to function correctly.  The Seek Thermal Camera app can be found in the Google Play Store, is completely free and only takes up 8MB on your phone or tablet.  Upon opening it the app will ask you to plug the camera into your microUSB port or else it won't do anything for you.  Android has a feature that will automatically open the Seek app when you connect this accessory, just check the box on the pop-up and plugging in your camera will automatically launch the Seek app (see screenshot below).  The app launches quickly and only takes 2-3 seconds to initialize the camera.

What you'll notice immediately is how close everything seems to the camera relative to what your smartphone's camera usually sees.  This is because of the narrow field of view on the unit and requires a little getting used to.  Seek knew this would feel a bit weird at first so there's a simple toggle in the top right of the app to split the screen between your phone's camera and the Seek camera, giving you a better view of what you're actually looking at.  Neither image will lineup perfectly thanks to the pretty vast difference in viewing angles on the Seek versus your smartphone's camera, but regardless this split screen view helps immensely when trying to track down more minute things like pipes in walls or the edge of a doorjamb.

The main viewfinder in the app looks a lot like any other camera app does, with a large shutter button on the bottom as well as a way to switch between photo and video mode.  On the left side you'll see the thumbnails of pictures and videos taken with the app, while the bottom right icon changes what you see in the center crosshairs of the app.  By default this is set to blank and only shows the thermal image, but the second option lets you can toggle the exact temperature of what's in the crosshair.  The third option provides two crosshairs on screen that point to the highest and lowest temperatures the camera currently sees, along with their exact temperature too.  Last but not least, is the threshold mode which allows you to set a specific temperature to find and only display values above or below that set temperature.

As you would expect there's a menu button on the top left that presents a number of options.  From here you can toggle viewing Fahrenheit, Celsius or Kelvin scales, as well as change the color palette the app uses to show you the thermal values.  By default this is a very orange and warm look, but if you prefer another look or have difficulty seeing the colors because of a color blind impairment or something similar, you can choose between a number of values.  In total there are 7 different color modes and 2 different black and white only modes.  Under the image preferences section of the menu you'll find a way to change the aspect ratio, add or remove a watermark and enable or disable geotagging on the metadata of the image. 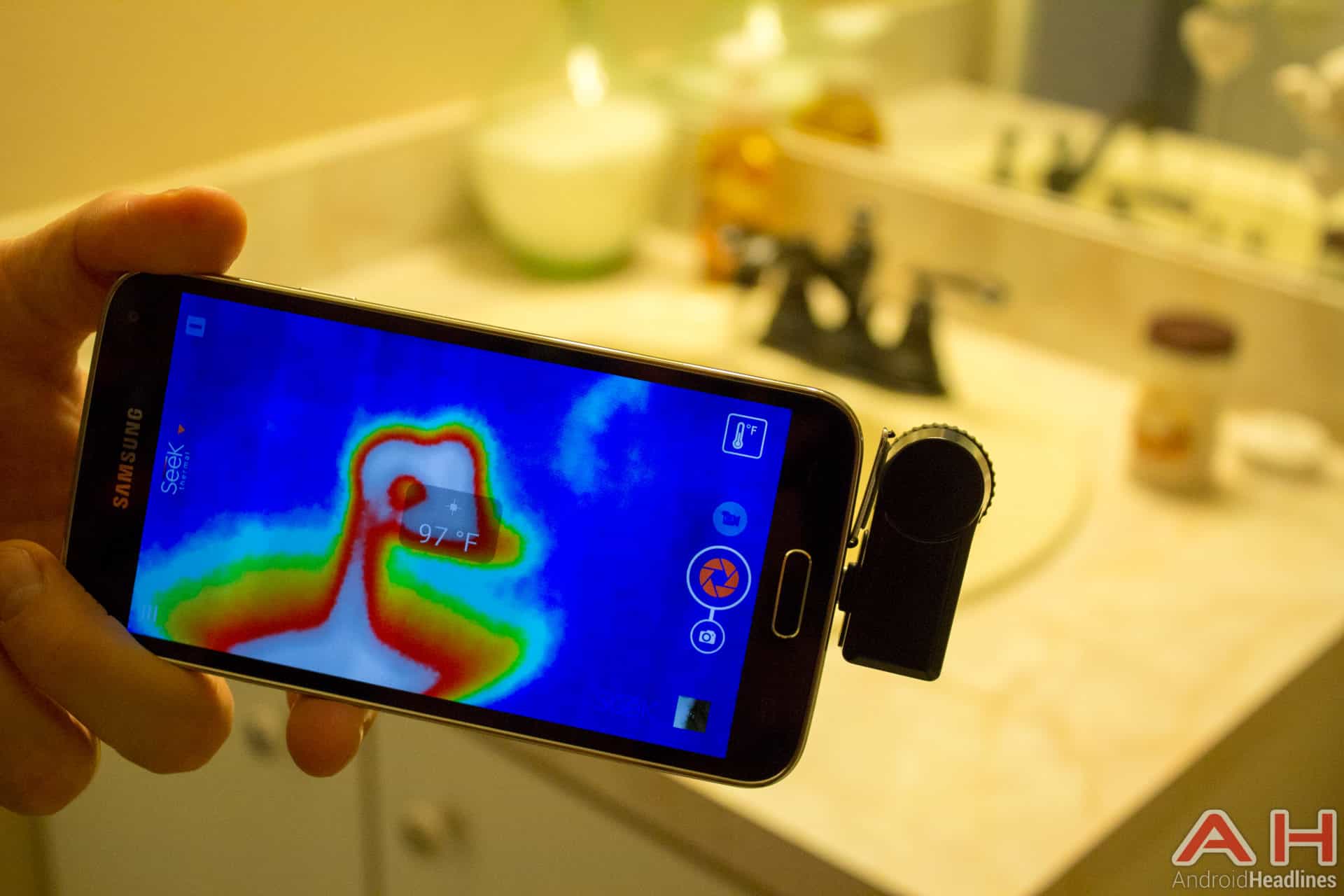 The image itself can be rotated as you would expect, and in split screen view the split will always be vertical relative to how you're holding the phone.  The framerate of the thermal camera is significantly lower than you're likely used to seeing on your smartphone's camera, which will create a bit of a jarring effect at first.  Enabling the split screen view helps alleviate any of these jarring issues and will significantly enhance your usage of the camera without a doubt.  Without the split screen view enabled I found myself getting lost quite often, even though I knew I was pointing the camera straight where I was looking.  Things look very different in thermal view than how our eyes perceive them and it can trick your brain into not understanding exactly what you're seeing.

While the framerate was difficult to get by at times, the delay in movement made it a more difficult experience to pinpoint spots sometimes, especially if I was trying to get an exact reading on a small spot.  Again a little bit of time spent with the camera gets your brain and muscles adjusted to the delay, and I found myself not having this issue after even just a few minutes of consistent use of the app, but it's worth noting that there's a bit of a learning curve.  Everything else in the app works flawlessly, and even taking pictures and video works exactly as well as you would expect.  These pictures and video are all saved to the Seek Thermal folder on your phone and can be found in your phone's gallery.

Using other methods of measuring temperature on specific devices I found the Seek Thermal Camera to be within as much as 1 degree off on average, but more often than not it was pinpoint accurate with the temperature of an object.  In the last few weeks since the launch of the Nexus 6P and when I received this camera, I've used it to measure the heat given off on certain phones where heat might be a concern.  Yet again the temperatures line right up with what the phone is reporting via its internal sensors, and I found the Seek Thermal Compact Camera to be incredibly accurate.  There's zero delay in reading the temperature too, so you won't have to hold it in a specific spot to measure heat like a thermometer you stick in your mouth or something, just point and read.

I did run across a few errors or bugs depending on the situation though.  One time (seen above) I was looking at someone with the camera and it didn't get the body temperature right.  82 degrees Fahrenheit isn't even close to a human body temperature, yet that's what the camera was telling me.  This could have been due to anything, but it was an anomaly that I couldn't reproduce.  What seems to be consistent is the weird cropping that takes place on pictures while using the dual-temperature feature.  When in this mode the app shows you the highest and lowest temperatures on the screen, however the picture taken during this mode is in the wrong aspect ratio and appears to be cropped, as it only shows the highest temperature on the screen.

Check out what it looks like in action below, just be aware there's no audio on this video as the app doesn't capture audio when recording. 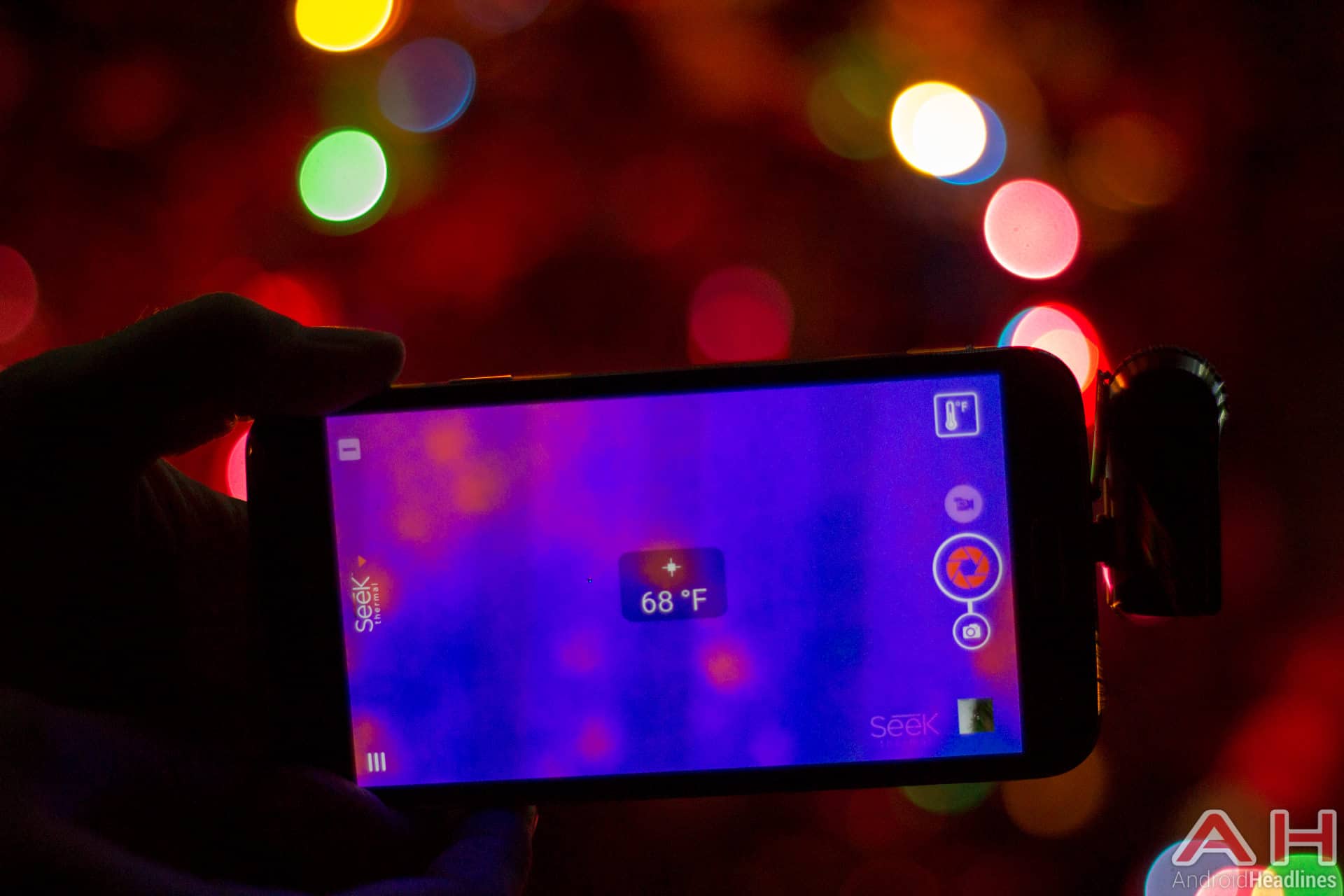 For $250 the Seek Thermal Compact Camera is a bit of a niche product, but at a lower price its something that would be absolutely invaluable in every person's lives, even if you don't use it daily.  The ability to find leaks in walls, power problems, measuring heat from appliances, and even other things like spotting game while hunting creates an incredibly wide range of uses for the product.  The simple app gives a good amount of features and wasn't lacking in anything in my estimation, even if the performance of the framerate from the camera could be improved.  The biggest issue here is the specific microUSB port used on the camera, which forces users with alternatively configured ports to purchase additional adapters just to use the camera.

Seek could have provided a rotating port which would have made this more universal, and of course USB Type-C will make this issue irrelevant in future devices.  For now though, you'll need to make sure the flat side of that microUSB port on your phone faces the back of the device, or else you'd better grab an adapter, like this one on Amazon for instance.  The adapter could also provide more interesting ways of using the camera since it's on a 6-inch cord, but will take away the easy ability to use split screen.  Either way it's a product not without flaws, but one who's advantages clearly outweigh those flaws.  If you'd like to grab one for yourself or someone else this holiday season, head through the link below.

Advertisement
Buy the Seek Thermal Compact Camera
Trusted By Millions
Independent, Expert Android News You Can Trust, Since 2010
Publishing More Android Than Anyone Else
0
Today
169
This Week
661
This Month
3173
This Year
104652
All Time
Advertisement