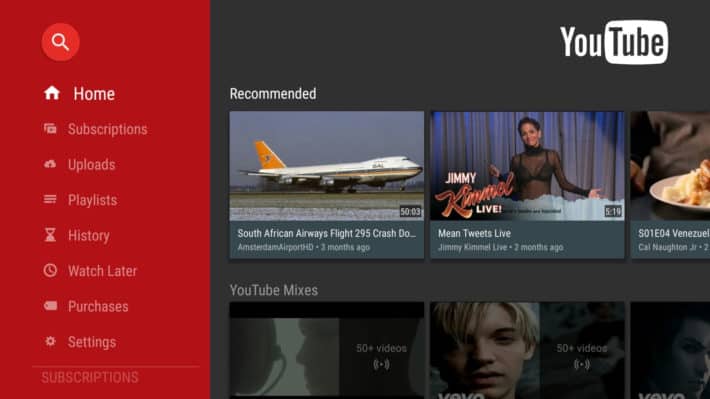 Yesterday saw an update coming through for the Google app on Android TV. While the app did not bring too much in the way of new or improved features, it was an update which was designed to harmonize the look of the Android TV version of the Google app with that of the the mobile version. An update to bring with it the recent Google branding change which was announced a few months back. Following on from that update and today, YouTube for Android TV also seems to be getting an update. While this one again does seem to bring through a number of more cosmetic-based changes, some of those changes in appearance will prove to be functional changes for the end user as well. Although, the bulk of the changes are indeed cosmetic in nature.

The biggest change worth noting is that the settings tab has been moved to a far more prominent position compared to before and now requires less scrolling to be reached. In fact, it now appears in-view when opening the YouTube app. In addition, the actual contents of the settings has also been increased and there are some new icons now present, including a Cast icon, Feedback icon and a 'Stats for Nerds' icon. The latter of which is designed to provide more in-depth information on videos currently being watched. While this is an interesting feature, it will be one which is unlikely to prove that useful to most users.

It is also worth noting that if you are a subscriber to the newly launched YouTube Red service, then you will also notice quite a significant visual change with the main YouTube logo which is prominently displayed on the app's main page (top right corner). After the update, the logo will include the word "Red" highlighting that you are an actual YouTube Red subscriber. Last but not least, once you play any video after the update, you'll also notice a couple of new icons which offer a shortcut route to subscribe to the uploader's channel or view more of their content. The update should be en route to Android TV devices and therefore, you should see it arrive organically over the next couple of days. If you would prefer to be running the update now, you can pull the APK from the link below and sideload in the normal fashion.