In the technology industry, it’s important for companies to remain innovative. Otherwise things get boring and technology doesn’t get better. The Boston Consulting Group recently put out their list for the most innovative companies in 2015 (something they’ve been doing since 2005), and at the top of that list is Apple and Google. Now this shouldn’t surprise many people as they are the biggest tech companies around, and also own the two largest smartphone platforms. Rounding out the top 5 are Tesla Motors, Microsoft and Samsung Group (so that’s all of Samsung, not just Samsung Electronics). Other notable companies include Amazon at 9, SoftBank at 14, Yahoo at 16, Facebook at 28, Huawei at 45 and Lenovo topping off the top 50 at number 50.

In previous years, Samsung has been in the third spot, but this year they have slid down a bit to number 5 falling behind Tesla and Microsoft. Tesla recently announced Autopilot, which is semi-autonomous driving for their electric cars. While Microsoft has announced some pretty unique products this year, specifically the new Surface Book and Surface Pro 4. Google kept it’s number 2 spot for the second year in a row and Apple has the number one spot for the 11th year in a row. This shows that while Samsung is no doubt innovative – especially with those curved displays – it appears to not quite be enough to keep them at number three. But if there’s one thing we know about Samsung, it’s that this won’t go down without a fight. They took a chance this year with their redesign of the Galaxy S6 and Galaxy Note 5. And for the most part it paid off, but in 2016 it should be even better.

It’s hard to disagree with the top 5 that the Boston Consulting Group have put in this list. As all five companies have been pretty darn innovative this year, and have all announced new products in 2015. Not just successors to their current products, but actually new products. Like the iPad Pro, Pixel C, Surface Book and the Galaxy S6 Edge/Edge+. Innovation is what continues to drive technology to get better and better, and all 50 of these companies are definitely doing their part here. 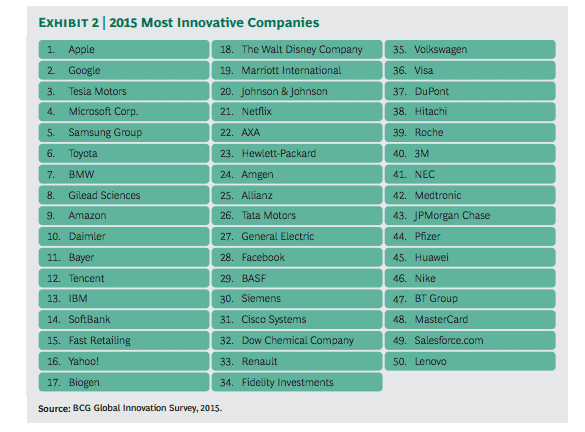