If there’s one common theme that always seems to center around the Android operating system, it’s fragmentation. In some circles fragmentation can be viewed as a term that is somewhat taboo, despite the fact that it is still a very real issue with the platform, and not just on a single level. Around the right people, or rather the wrong people depending on how you look at it, utter the word fragmentation and it almost always seems to spark a debate that never ends well. There should be no misconceptions about the topic though. Android is still very fragmented and that isn’t going away anytime soon. The negative connotation with the word “fragmented” isn’t the only side of things though. Android’s fragmentation has and still is an opportunity for Google. From the beginning, Android’s fragmentation (wealth of choice or options) is what has gained the platform such a following in the first place. Without that openness, that collection of options for consumers, there’s a good chance that Android wouldn’t be as big as it is today.

It’s this particular detail that has been a strength for Android, allowing for a marketshare of more than 80% of the global smartphone sales. The fragmentation is the very thing that has allowed Google such an opportunity to be dominant in the smartphone industry. This, however, does not dilute the problems. Android is fragmented on more than one level and just as much as it is an opportunity it can also continue to be a hindrance, and if left completely unchecked, the issues with fragmentation have a possibility to grow into a major headache. Before we can really grasp the idea of fragmentation as being Android’s biggest opportunity, though, fragmentation as a weakness needs to be addressed. 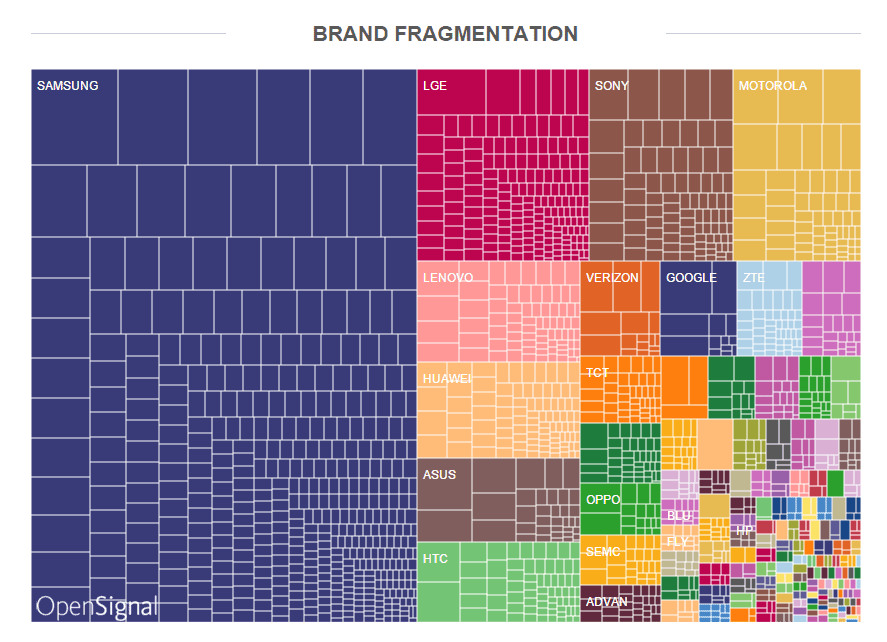 The most prominent is the amount of differing brands that manufacture Android smartphones. A report from OpenSignal earlier this year displays this sort of fragmentation perfectly. The graph depicts the amount of available Android device brands, showing recorded results of 1,294 different options for consumers. That’s also just the brands alone and not counting the number of different devices that each brand has. Taking this into consideration, you can quickly see how the brand fragmentation might cause some issues, as each brand has the ability to put their own spin on the Android operating system, and those tweaks make more work for developers. The number of devices also makes it more difficult to shorten the fragmentation gap, with OpenSignal reporting having seen 24,094 different Android device models this year.

With so many device brands in play, and multiple device models from each brand with each one playing to a specific tier of the market, this leads to varying levels of performance on the platform, which proves to be a challenge not only for Google in trying to make their operating system work across all devices with different hardware, but it poses a huge challenge for developers trying to do the same for their apps. This boils down to optimization. Both Google and app developers are tasked with finding ways to make the OS and the apps/games optimized to work on as many devices as possible, but with gaps in specifications it becomes more difficult for both parties to deliver something that everyone can use and still get an equal experience. Compromises end up having to be made due to the requirements needed to run certain things. This is just the way computing works when there are so many options out there with a wide degree of performance levels. Either Google and app developers end up having to scale back on what they might have envisioned as an end product, or they have to cut some devices out of the mix in order to keep the integrity of what they want to deliver, and more often than not it ends up being the latter. Sure, this is simply the nature of things with technology. Technology gets older, but also continues to rapidly advance and as that happens things can become more visually appealing, they can become more functional and devices can deliver better performance.

In regards to Android, this ends up resulting in a wider gap between devices that can handle the advancements of the operating system and the ones that can’t, although Google have been working diligently to close this gap with more recent versions of Android. According to the same OpenSignal report mentioned earlier, over the course of 2015 the fragmentation between Android versions has been decreasing, with KitKat now being the majority version. Although version fragmentation is still very much an issue, it’s not as bad as it was when KitKat first launched and there were three different versions of Jelly Bean, one version of Ice Cream Sandwich, and Gingerbread users all in the mix along with it. Google is also making strides in getting the newer versions to work across more devices, even the ones with lower amounts of resources.

Another issue worth noting revolves around the differing level of app revenues on Android. Compared to those of iOS, Android app revenues are lacking. According to a report from App Annie earlier this year, Apple’s iOS continued to see the lion’s share of app revenues between the two behemoth mobile platforms. Revenues in Q1 of this year were reported higher on iOS, and this shouldn’t be a huge surprise as it’s been this way for years. Android keeps the larger amount of downloads, but iOS sees more revenue from the downloads they have compared to Android. From Q3 of last year to Q1 of this year, iOS app store revenues rose from a 60% lead over that of Android to a 70% lead.

Part of this may be due to the growing marketshare Apple has in China, but other factors also potentially play a role. Those that buy Apple products are spending more money on those products to obtain them, this includes iPhones. For consumers who are willing to spend more money on the device itself, it’s also quite possible they’re more likely to spend money on apps and games from the App Store. With fragmentation being a much bigger issue on Android, it stands to reason that developers are going to have an easier time developing their apps and games for iOS first, even if they do plan on producing an Android app at some point. This ends up giving iOS a lead on apps that cost money, and some apps that make the jump which do cost on iOS end up as free downloads for Android, with the option of paying to unlock extra content or a full version of the app or game, where on iOS there is a fixed and upfront price. iOS users also tend to have a higher conversion rate than Android users, and have typically been more willing to complete transactions via their mobile device online. A recent report from Moovweb shows however that this gap in conversion between Android and iOS is shrinking, as they observed that the gap was only about 5% in Q1 of 2015. Compared to Q4 of 2014 where the conversion rate was at 19%, this is a significant decline, showing that Android users are now more willing to make online purchases via their mobile device. 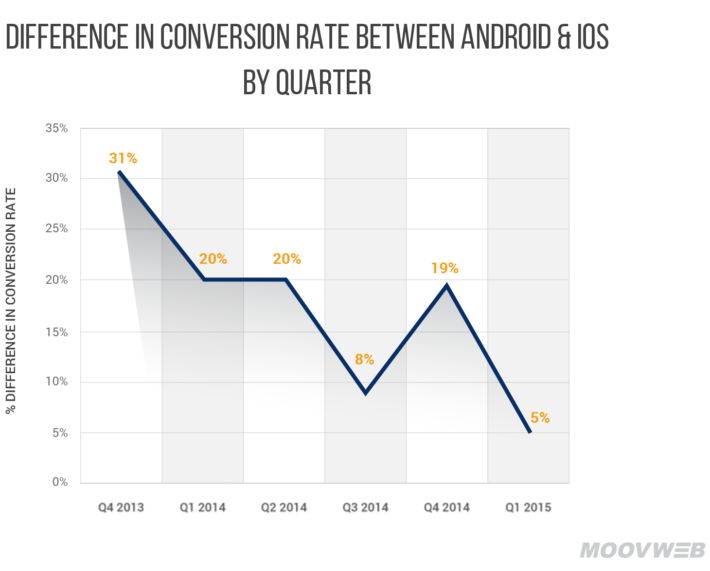 Moving back to fragmentation, there are certainly parts of it which are bad for Google, developers, end users, and the platform as a whole. Software updates is the biggest part of this. With so many different Android devices out there and generally each OEM looking to differentiate themselves from one another to deliver allure to customers, it becomes harder to get software updates at the quick pace often seen for Nexus devices, although this too, has improved quite a bit over the last couple of years. More of the blame should be placed on the OEMs and the carriers though when looking at Android’s “slow updates due to fragmentation” problem. There is a clear prioritization on money when it comes to carriers and manufacturers. It’s lucrative to keep consumers buying or upgrading to the next device which is more likely to come with a newer version of software, than to simply update those that are already in the possession of users.

Google has made attempts to unify the fragmentation so as to make it easier for developers to make their apps compatible with as many devices as possible, and for updates to make it to devices in a timely manner, and this is certainly a good thing. Android One devices can be cited as one good example of how Google is trying to tackle the fragmentation issue. Although Android One devices are manufactured by a number of different brands, most Android One device started receiving the updates to Marshmallow as early as the first couple of weeks of October, while some Android One devices have started to receive an update to Android 6.0.1 as of a little over a week ago. This goes to show that Android One can be an example of what OEM’s should strive for when it comes software updates. Although fragmentation of the software side of things is more of a sore point than a beneficial trait for the platform, that is changing, slowly but surely, and the sheer diversity of options that consumers have will remain as one of Android’s greatest strengths. “Be Together, Not The Same” does well to illustrate why Android has and should continue to be so successful.

Everyone is different and unique, and there’s no reason why our Android devices shouldn’t also have their own uniqueness. It allows for every single Android user to choose the device that best suits their personal taste and personality, and if Google could just close the gap to where most Android users were on the same version of Android, or decrease it down to two or three versions, then Android would be quite a dominant force indeed, likely more so than it is now.