Letv has been all over the news recently. This China-based company has released their first three devices back in April this year (Le 1, Le 1 Pro and Le Max), and has, since then, release an additional smartphone (Le 1s). Now, Letv has released their LeMall webshop in the US a couple of weeks ago, though you can purchase only accessories in it for the time being, but that will change soon. Letv has announced that they will be launching in the US during CES in January, which means that we'll see at least one handset released in the country at that time.

That being said, a couple of days ago, a high-end Letv-branded smartphone has surfaced on GFXBench and AnTuTu with 4GB of RAM and a Snapdragon 820 SoC. Well, it seems like that's not the only handset Letv intends on announcing in the coming weeks. The 6.9-inch Letv device has popped up on GFXBench, and it does sport a rather high-end set of specs. Letv will quite probably refer to this device as a phablet, though it can be considered a tablet as well considering its size. The 'Letv Max4-70' sports a 6.9-inch 1080p (1920 x 1080) display along with 4GB of RAM and 64GB of internal storage. The device will be powered by the Snapdragon 810 64-bit octa-core processor along with an Adreno 430 GPU for graphics. Android 5.0.2 Lollipop is listed here, but the device will probably ship with either Android 5.1 Lollipop or 6.0 Marshmallow.

As far as camera sensors are concerned, the GFXBench listing says 'not supported' for both front and rear-facing units. Well, it is possible that the device will sport only a front-facing camera if Letv intends on advertize this as a tablet, but we somehow doubt that. This device will almost certainly going to pack in both front and rear-facing cameras, and Letv will sell it as a phablet rather than a tablet. Now, considering the device has popped up on GFXBench, its TENAA certifications can't be that far away. Once it pops up at TENAA we'll have far more information to share with you, including camera sensors, and quite probably some images of the device itself, so stay tuned for that. 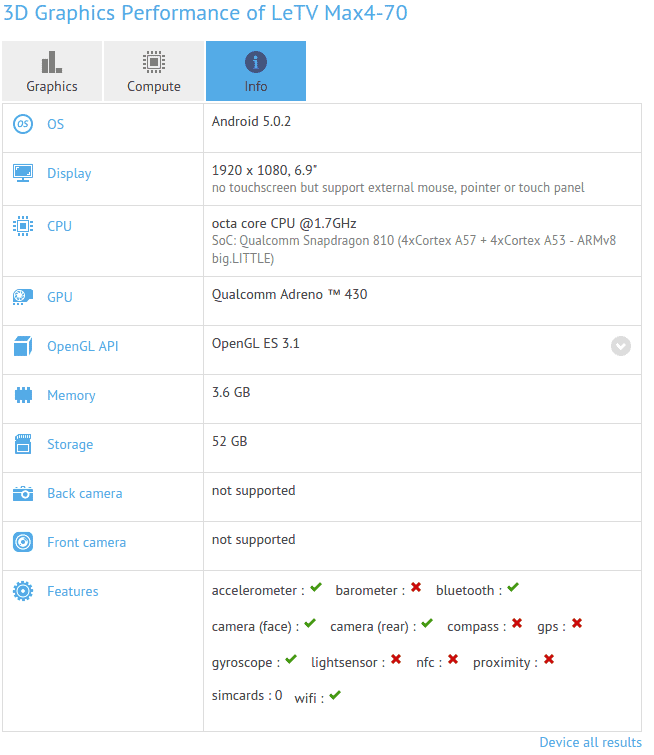