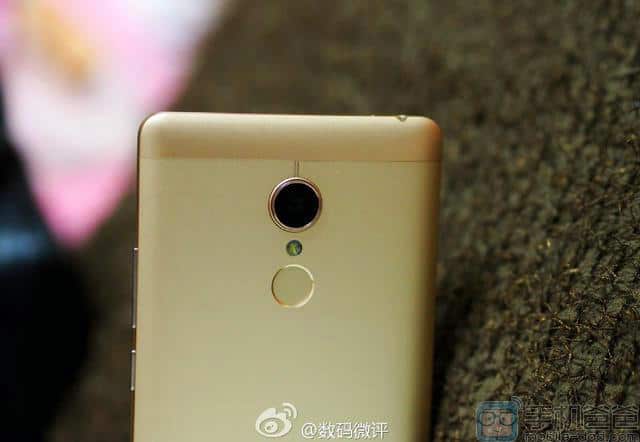 Xiaomi has recently announced that they'll hold an event on November 24th in China. The company actually refers to this event as the 'Grand Finale' so we're expecting some cool announcements during the show. One thing is for sure at this point, Xiaomi will announce the Redmi Note 2 Pro handset which has been surfacing all over the internet for quite some time now. The device has been certified by both TENAA and 3C Certification in China, and the company's CEO has decided to share the image of the phone quite recently.

That being said, another leak surfaced online, and this time we get to check out real life images of Xiaomi's upcoming smartphone. If you take a look at the gallery down below, you'll get to see the Redmi Note 2 Pro smartphone in the flesh. This seems to be the gold-colored handset, and you can clearly see parts of it, not the front side of the device though. The phone will be made out of metal, and you can clearly see the rear-facing fingerprint scanner as well. The charging port, SIM tray and physical buttons are shown in the images down below as well. Both the power / lock and volume rocker buttons will be placed on the right-hand side of this device, and the rear-facing camera will protrude ever so slightly.

The Redmi Note 2 Pro will sport a 5.5-inch fullHD (1920 x 1080) display, 2GB of RAM (3GB model is a possibility), and 16GB of native storage. MediaTek's Helio X10 (MT6795) 64-bit octa-core SoC will fuel this smartphone, and Android 5.0.2 Lollipop will come installed out of the box with Xiaomi's MIUI OS available on top of it. On the back of the phone you'll be able to find a 13-megapixel camera, while a 5-megapixel shooter will be available up front. That is pretty much it as far as specs are concerned, it is also worth mentioning that the device is expected to cost around 1,099 ($172), at least according to the latest rumor which surfaced. Stay tuned for more info, and market November 24th in your calendars, Xiaomi will unveil this handset on the said date, though keep in mind additional hardware announcements are possible as well.