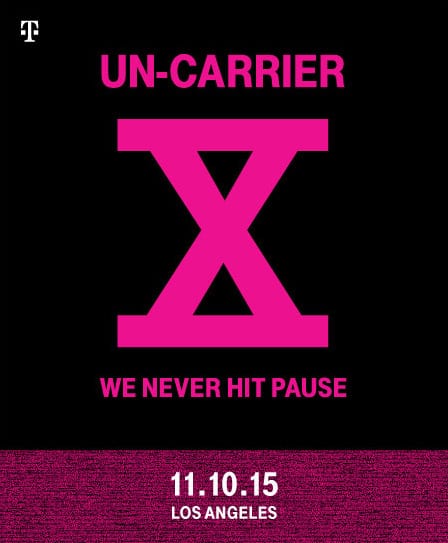 Today, T-Mobile is going to be unveiling their tenth Uncarrier movement, in Los Angeles and it all kicks off at 11am PT or 2pm ET, depending on which side of the US you are located on. T-Mobile's Uncarrier movements have been meant to eliminate pain points for customers. Including getting rid of contracts, overages, and roaming fees. Not to mention Music Freedom, allowing you to stream music from various services and it not count against your data. And now when you travel to Mexico or Canada, you can get 4G LTE data for free, included with your plan. Not to mention the test drive, allowing potential customers try out their network before signing on the dotted line. As most of us know, T-Mobile's coverage isn't the best, but it is improving daily. All of these Uncarrier announcements have definitely made things better for customers, and eliminated many pain points already. So what's left?

Currently, nothing has been announced. However, famed leaked Evan Blass, has stated before that we might see something similar to Music Freedom announced today, but for Netflix, HBO and a few other streaming video sites. Now if this does happen, this would eliminate two of the biggest culprits of data usage, and allowing many people to give up their unlimited data and get a smaller data cap. The tagline for today's event is also "We Never Hit Pause" which lends some credence to Evan's leak about this. The service is said to be called BingeOn.

While we may get BingeOn today, it's more than likely not the only thing that T-Mobile has planned for today. So we'll have to watch the live stream and see what exactly T-Mobile's John Legere has planned for us. The magenta carrier is live streaming the event on ustream which you can watch below. It should start around 11am PT/2pm ET, although these things can often times be late.

As we always do, we will be covering the Uncarrier X event, so make sure you keep it locked to Android Headlines, especially if you are unable to watch the live stream.