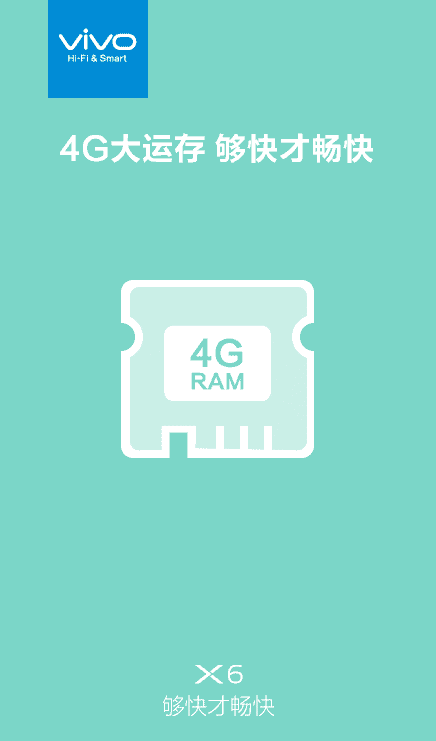 The Vivo X5 and X5Pro devices were rather popular in China back when they launched. We haven't heard much from this China-based OEM in a while now, but their X6 flagship has started popping up online recently. We've seen all sorts of rumors surrounding the X16, and Vivo has actually decided to confirm one aspect of the device, its RAM count. The company has shared an image on their official Weibo (Chinese social network) account which directly confirms that the phone will sport 4GB of RAM.

Now, according to previous rumors, the Vivo X6 might sport a QHD display, and will be fueled by MediaTek's Helio X20 deca-core processor. The phone will be very thin it seems, at least according to the leaked image you can check out down below. One rumor has also mentioned that the phone might sport 'Force Touch' tech as well, and the Hi-Fi audio was also mentioned. The Vivo X16 will be available in a number of color options if leaks are to be believed. If you take a look at the third image down below, you'll get to see this phone in 5 different color options: Silver, Black, Grey, Pink and Gold.

That's pretty much all the info we have when it comes to Vivo X6. It is worth mentioning, however, that its predecessor sported a 5-inch display, so the Vivo X6 will quite probably be quite manageable as well. We believe that the phone will ship with a 5-5.2" display this time around, unless Vivo decided to go all out and include a 5.5-inch panel in here. The phone will probably be made out of metal and offer two SIM card slots, while you can expect Android Lollipop to come pre-installed here with Vivo's Funtouch OS available on top of Google's operating system.

That is pretty much it. The Vivo X6 will definitely have plenty of competition out in the market, especially in China. It will be interesting to see how much will this device cost because if Vivo goes too high with its price it's hard to expect the device will sell all that well. We still don't know when will the phone launch, but we'll let you know as soon as we find out.