System-on-Chips are evolving at a frightening pace, thanks partially to Apple's massive investment into mobile chipsets, which has pushed industry chipset developers into a game of catch up. Apple's push into 64-bit mobile computing architecture in 2013 caught the Android industry somewhat on the hop and when we consider single core chipset performance, the established industry players are still lagging Apple's System-on-Chips. The majority of Apple's mobile chips use a dual core application processor architecture although a number for the iPad are triple core, designed for the optimum blend of performance and battery efficiency when combined with Apple's proprietary operating system, iOS. Other manufacturers have taken to designing different chipsets for Android (and Windows) mobile devices, from MediaTek's ten core, three tier, big.LITTLE arrangement through to Qualcomm's four core, two tier arrangement. Processor designers have also integrated a number of different technologies into System-on-Chips, including the GPU (Graphics Processor Unit), the Bluetooth, modem and Wi-Fi radios, location services, short range communication radios (such as NFC), plus onboard security and learning functions. A number of chipsets now include a sensor module, which is a specialised set of ultra low power components designed to be always on and provide device support for functions such as always-on voice command.

We recently wrote about Samsung's chipset division working on a so-called Bio Processor. At the time, the story suggested that the new chipset would be similar to an existing System-on-Chip but would include the necessary health monitoring sensors on the unit itself, rather than relying on auxiliary sensor modules. The advantage to this arrangement is that it would result in a smaller unit, easier for handset or wearable designers to incorporate into their devices. The designers would need to provide provision for antennas but the control module would be integrated into the processor. This has the knock on effect of reducing power consumption, as modern chipsets' integrated features draw less power. The original rumor suggested that the Bio Processor would be constructed on a 45nm process size, considerable larger than contemporary System-on-Chips (Samsung's flagship Exynos 7420 unit is built on a 14nm process size).

Samsung have provided additional details for their Bio Processor at their Investor Forum. Despite the larger process size being used, the new chipset is said to be 80% of the size and use 50% of the energy that current solutions manage. The Bio Processor includes integrated heart rate sensors and the ability to measure body fat, galvanic skin response and skin temperature so as to determine how hard the body is working. Samsung's engineers have also designed the unit with access control (typically a door lock) using our unique heartbeat for authorization, although this technology will require an appropriately compatible smart lock. This technology could also be used to authenticate mobile payments too.

In the investor forum, Samsung alluded that their new Bio Processor would be used from next year and that it is in discussion with other companies designing wearable devices, as well as planning to use the unit in their own wearable products over the course of 2016. Unfortunately, we don't have a more refined estimate as to when the Bio Processor will be available in consumer devices, or additional information such as the architecture behind the chipset involved. 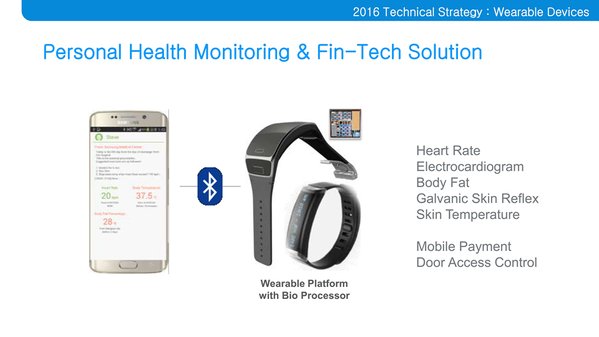