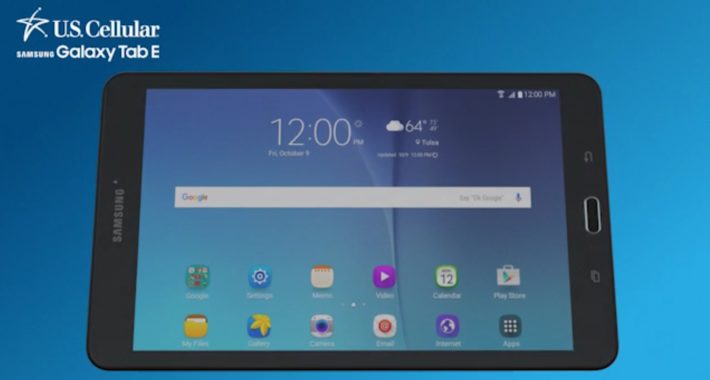 When it comes to tablets, Samsung pretty much do have everyone covered. In fact, whatever the type of tablet you are looking for or features you need, they have one to suit. They of course, have their more traditional flagship tablet ranges. If however, what you are after is something with a gigantic screen, then they have you covered with the Galaxy View. If you are looking for something a lot smaller and also much friendlier on the pocket, than they have you covered with the Galaxy Tab E as well. That is, if you are on Version at least.

The Galaxy Tab E was released on Verizon back in September, however, it now looks as though U.S. Cellular has opened up sales for the tablet on their network. This is, both in store and online. For those new to the Galaxy Tab E, this is an LTE enabled tablet, which means you can pick it up along with its own data plan. In terms of the pricing, the Galaxy Tab E can be picked up a two year contract for $129.99, which is down from its original $210 asking price. While, those more interested in an installment plan can pick up the Tab E for $8.75 per month and again, over a two-year term.

If you need a quick reminder on the specs, then the Galaxy Tab E comes equipped with a 8-inch display which makes use of a 1280 x 800 resolution. On the inside, the Galaxy Tab E comes loaded with 1.5GB RAM and powered by a 64-bit Qualcomm Snapdragon 410 quad-core processor (clocking at 1.2 GHz). In terms of storage, this one offers 16GB internal storage as standard and also does offer the option to expand, thanks to the inclusion of a microSD card slot. While, in terms of cameras, the Galaxy Tab E brings with it a 5-megapixel rear camera, which is coupled with a 2-megapixel front facing camera. Everything comes powered by a 5,000 mAh battery and the device comes running on Android 5.1 (Lollipop) out of the box. Those interested can find out more details or order, by heading over to the U.S. Cellular page listing through the source link below.