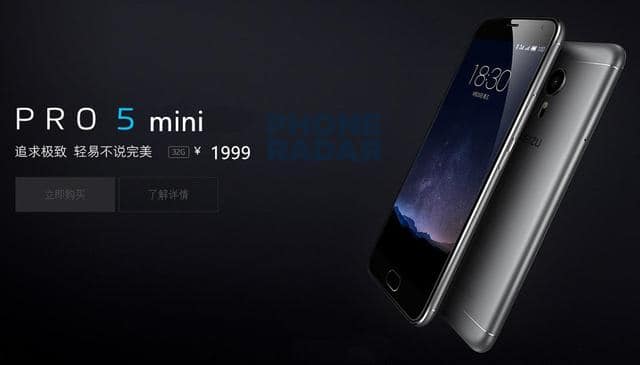 Meizu hasn’t exactly released a ton of devices this year, but the ones they did release, are quite compelling. This China-based company is one of the fastest growing smartphone OEMs in the world and they tend to release really affordable devices which are actually quite solid in both terms of build and performance. The Meizu PRO 5 is the company’s latest flagship, and it was announced back in September. This handset is powered by the Exynos 7420 64-bit octa-core SoC, sports 3 or 4GB of RAM and packs a 21-megapixel camera on the back. The PRO 5 sports a ton of features, and is, overall, a really powerful phablet.

That being said, it seems like Meizu might be preparing the smaller version of this phone, at least according to the newly leaked info. According to this leak, the Meizu PRO 5 Mini will sport a 4.7-inch 1080p display, while its bigger brother sports a 5.7-inch fullHD panel. The PRO 5 Mini will allegedly be available in 32 and 64GB variants, and will be fueled by the MediaTek X20 deca-core SoC. The source also mentions that the 32GB variant of this phone will cost 1,999 Yuan ($315), while the 64GB model will be priced at 2,499 Yuan ($394).

If this info is accurate, the PRO 5 Mini would be significantly cheaper than the PRO 5 which is priced at 2,799 Yuan and 3,099 Yuan for 32 and 64GB variants. As far as other specs on the PRO 5 go, it is quite probable that the device will sport the same 21-megapixel snapper the PRO 5 does, and it will almost certainly look the same as its bigger brother, but will be smaller, of course. Android 5.1 Lollipop will come pre-installed on this smartphone with Meizu’s Flyme 5 OS on top of it. You can also expect the physical home button to be located below the display, and for it to double as a fingerprint scanner. Meizu’s mCharge Quick Charging tech will be available here as well, and the device will almost certainly going to be made out of metal.

That’s pretty much it, we still don’t have that much PRO 5 Mini info, this is the first time we hear anything about this device. If Meizu truly intends to release such a phone, you can expect it to arrive before the holidays.