Skip to content
Trusted By Millions
Independent, Expert Android News You Can Trust, Since 2010
Publishing More Android Than Anyone Else
34
Today
34
This Week
654
This Month
5765
This Year
115766
All Time

While the LG G4 continues to be the official flagship smartphone from South Korean consumer electronics major, LG. The company also recently launched the dual-screen V10 smartphone with premium features and a premium price-tag to go along with it. While the company is widely expected to launch its fifth generation flagship smartphone early next year, we still don’t have any real info about the device. While it is expected to pack in top-shelf hardware when it launches in 2016, it is another smartphone from LG which is now getting some attention in the media after smartphone leaker extraordinaire, Evan Blass (a.k.a @evleaks on Twitter), revealed some information about it through a post on the microblogging site.

According to @evleaks, the upcoming device from LG will be launched commercially as the LG K7 in the middle of the first quarter of next year. As of now, the device is known internally within the company as the M1. While it’s anybody’s guess as to whether this will be an entirely new product line from LG or a replacement for the ailing ‘G’ series of flagship smartphones, the complete lack of information regarding the phone’s hardware specs makes it well-nigh impossible for anyone to even begin to speculate, let alone come to any conclusion, about the eventual positioning of the handset in the market. The supposed ETA however, is surprisingly close to the probable announcement of the next year’s flagship from the company, should the info from @evleaks hold up in the long run.

As for the tweet from @evleaks that forms the basis of this report, there’s a mention of LG’s confusing recent naming conventions for its smartphones. The tweet read, “First came LG P, marketed as the G4. Then came P+, now sold as the V10. Next alphanumeric mashup from LG? Codename M1 & branded K7. Mid 1Q16”. While the tweet itself may be tinged with more than a hint of sarcasm, LG can well use a hit (or two), after having seen a less-than-impressive uptake for its current-generation flagship, the LG G4. The consumer electronics major will be hoping that it will be able to turn around its fortunes with the V10, failing which, it could be interesting to see what next year’s LG offerings will bring. 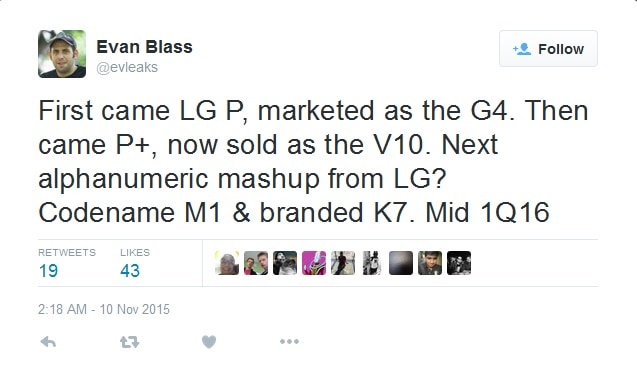