With each passing day, new rumors surrounding HTC’s upcoming smartphone models seem to be springing up. Earlier in the week, both @evleaks and @LlabTooFer claimed that HTC’s upcoming One X9 will be a mid-range device, thereby denying earlier rumors which claimed the handset will come with premium hardware under the hood. Now yet another post on microblogging site Twitter, this time from someone who goes by the handle @Ricciolo1, seems to suggest that the next flagship smartphone from the company may not be named the One M10 after all. While there’s no definitive indication given as to what the handset will eventually be marketed as, the leakster does mention that the just-announced Snapdragon 820 SoC from Qualcomm will be doing the duties under the hood in the new HTC flagship.

Of course, flagships from most major brands are expected to sport the Snapdragon 820 next year, but if and when that does turn out to be the case with the 2016 HTC flagship, it will be a welcome change for a company suffering from poor sales of its current generation top-tier model, the One M9, for a number of reason including frequent overheating thanks to alleged poor thermal management on the Snapdragon 810 chipset. Coming to the tweet that forms the basis of this report, the post on Tuesday from @Ricciolo1 read, “#M10 is NOT the CODENAME of the next #htc #flagship & the soc presented today is inside. #talk #easy for #obtuse minority spread in #forum”. Of course, there’s no way to verify any of the claims at this stage, so a pinch of salt may well be in order.

HTC has just recently launched its much talked-about One A9 smartphone last month, but although many in the media originally expected the device to carry premium hardware as per company CEO Ms. Cher Wang’s promise of a ‘Hero’ device, it turned out to be a false alarm, as the hardware specs of the A9 made it very clear that it will not exactly be the top-tier performer that everyone had expected it to be. With another rumored mid-ranger called the One X9 expected to launch early next year, it remains to be seen how HTC handles its next generation flagship. As for its nomenclature, only time will tell whether the company will indeed dump the ‘M’ branding for its flagship range, or if this particular rumor is only the figment of someone’s imagination. 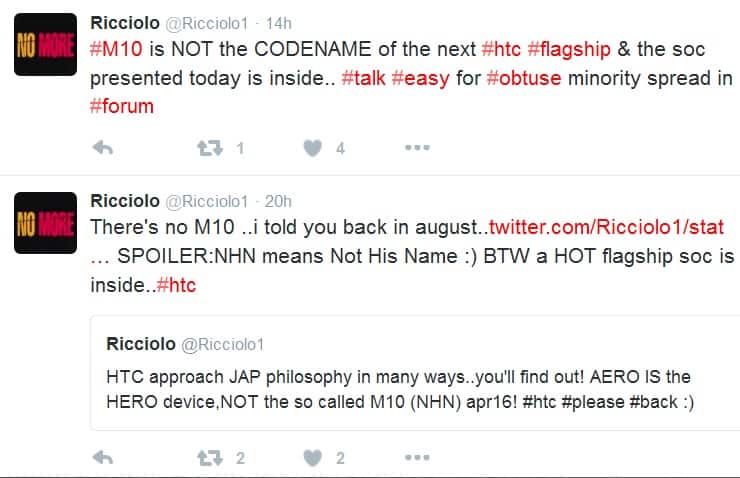