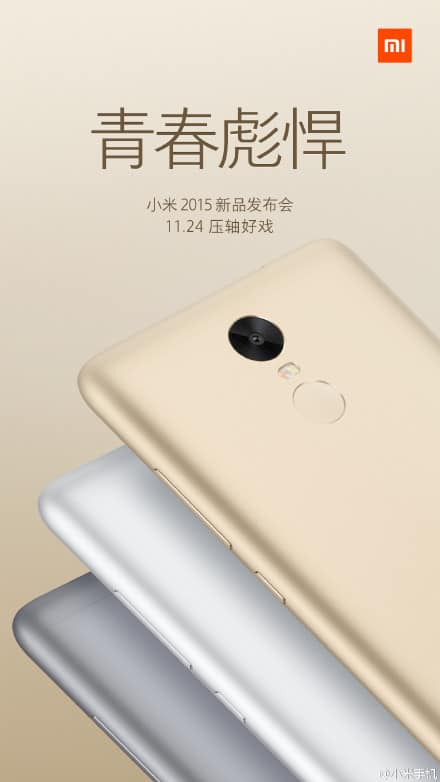 We've been seeing a ton of Xiaomi-related leaks and rumors lately, and ever since the company announced their November 24th event in China, those leaks have intensified. We've been seeing a lot of Redmi Note 2 Pro leaks recently, and according o Xiaomi's latest teaser, that handset will be called the Redmi Note 3 after all. Xiaomi has also teased the arrival of the Mi Pad 2 quite recently as well, and their smartwatch has been rumored to arrive tomorrow as well. We'll know more tomorrow for sure, but let's tackle the last piece of Redmi Note 3 info, shall we.

Two additional pieces of info surfaced recently regarding this handset. First of all, it seems like the 3GB of RAM rumors have been spot on after all, the updated TENAA listing now shows the 3GB of RAM variant (which will ship with 32GB of internal storage) of the Redmi Note 3 is on the way as well. That's not all though, Xiaomi has released yet another Redmi Note 3 teaser on the company's official Weibo (Chinese social network) page. If you take a look at the image above, you'll get to see the teaser itself. This image confirms that the Redmi Note 3 will be available in three color options, Gold, Silver and Gray. You can see that the launch date is once again confirmed on this teaser, so you can expect this smartphone to be announced tomorrow.

What specs will it sport? Well, the Redmi Note 3 will feature a 5.5-inch 1080p (1920 x 1080) display, 2GB/3GB of RAM and 16GB/32GB of internal storage. This handset will be fueled by MediaTek's Helio X10 64-bit octa-core processor, and a 3,060mAh battery will also be a part of this package. The 13-megapixel shooter will be available on the back of this smartphone, and a 5-megapixel snapper will be located up front. Android 5.0.2 Lollipop will reportedly going to come pre-installed on the device along with Xiaomi's MIUI OS available on top of it. This smartphone will be made out of metal, and it will sport a rear-facing fingerprint scanner. Interesting enough, this will be Xiaomi's first smartphone to sport the fingerprint scanning functionality. The phone is rumored to cost around 1,099 Yuan ($172) once it launches.