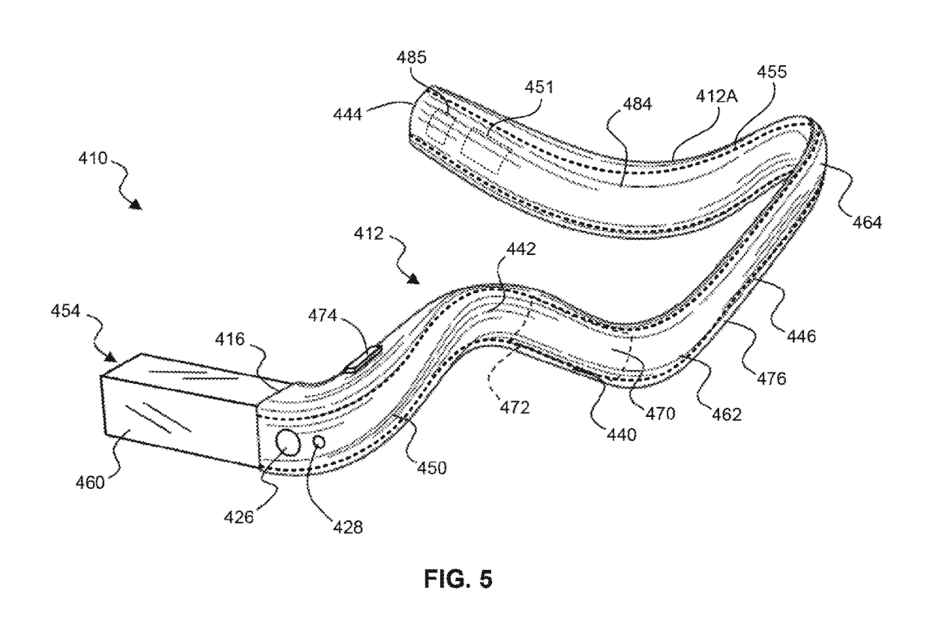 The Google Glass project once seemed to be like the future of wearable devices was closer than we thought. There was a prototype for sale, but the company stopped selling it at the beginning of this year, which led some to believe that the project was almost dead. This isn't exactly true, as Google will keep developing the technology necessary for this project to take off and be useful instead of staying an experiment. Since February, it was announced that Tony Fadell, CEO of Nest, was going to be in charge of this new chapter of the project. Proof of the development of the project is that Google has been patenting new technology that could be integrated into Glass and those patents could give us an idea of what to expect for the new prototypes.

This week, Google was granted a new patent which shows that a new device could be composed of a flexible material and it would be worn around the head over just one ear. It will contact the head of the user near the temple, then it would rest on the ear and it would go to the back of the user's head. The flexible material will be able to retain its form so that users could adjust it once and wear it comfortably in future occasions. Some parts of the band would have touch capabilities so users will be able to control some elements with it. The display part of the device would be positioned suspended over the eye of the user. The patent also mentions the possibility of having a display composed of a prism or another structure that could be extended so it can be viewed with both eyes.

It would certainly be hard to achieve as such material would contain all the circuitry. It is supposed to have two layers, one more elastic than the other so it can retain rigidity in some areas while being more flexible in others to ensure comfort. While it seems to be similar in function as the prototype of Google Glass, it's not specified if this device is part of that project, but it would be interesting to see if this new design would get more people to wear it.