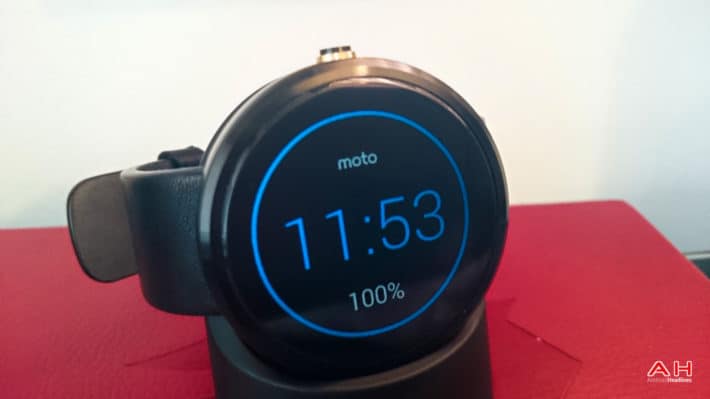 If you were ever looking to get a smartwatch, but wasn’t too keen on shelling out the money for a more expensive Android based wearable, then there is some good news today. It seems Google has now dropped the price of the first generation Moto 360 down to only $99.99 on the Google Store. Which is a nice price considering it doesn’t have the specifications and components that are featured in the latest generation or other manufactured smartwatches outside of Motorola. For those thinking about picking up the 2014 Moto 360, here is quick recap on what you can expect to get.

The Motorola Moto 360 was first released back in September of last year, with Android Wear 1.3.2 as its operating system, that, however, has changed to Android Wear 2.1.1, which is based on Android 5.1.1. This smartwatch features a 1.56-inch display with a resolution of 320 x 290 and 205 ppi. Protecting this display is Corning Gorilla Glass 3 while powering the device a TI OMAP 3 chip with a 1 GHz Cortex A8 CPU. As for the storage, consumers are given 4 GB to use, with 512 MB LPDDR for the memory. Additionally, there are a number of sensors built into the Moto 360 such as a pedometer, ambient light sensor, and an optical heart rate monitor.  While there have been reports of some spotty battery life with the first generation of the Moto 360, this was something which was later fixed with an update that was rolled out by Google. The listing does state that the smartwatch will be able to last up to a full day before having to be charged through its wireless dock that comes included when purchasing the smartwatch. Requirements for the device to operate and sync with your smartphone are pretty easy to meet, as the consumers will need a smartphone running Android 4.3 or higher.

Before today, the Moto 360 could have been purchased for around $149.99 through the Google Store. Now, since the price drop, Google is offering the Motorola Moto 360 for only $99.99 with free shipping. Consumers are saving $50 on what could be their first smartwatch or a device suited for a backup. Furthermore, because the holiday season is approaching fast, this could be a perfect gift for the tech enthusiasts in your life. Although, it is currently unclear how long this price drop will remain in effect for.