One of the main reasons our batteries don't last long is that the dozens and dozens of apps we have installed are in constant communication with their respective servers exchanging data and pushing content so you can have the data you need. However, a recent study conducted by MIT researchers brought up some interesting and rather very annoying revelations about how these apps communicate. It was found that more than half of the communication between apps and their servers do not alter the user experience. Called covert communication, it means they are not syncing data you need, instead they are sending out information about your usage behavior.

Privacy issues are only among the first concerns, as background communication suck up a lot of battery and consume your monthly mobile data allowance. According to the research, 63 percent of the external communication made by top popular free Android applications from Google Play has no effect on the app functionality. By analyzing 500 popular free apps on the Play Store, they also found out that not allowing the apps to make these covert communications left the user experience intact. One example highlighted by ZDNet is the official Twitter app, which collects data about videos followed by users in tweets. Another example is the Walmart app, which has a barcode scanning feature and it communicates with an Ebay server

Although this kind of data collection is normal and very important for the companies that make them, the problem here is that users don't even know this is happening. "There might be a very good reason for this covert communication. We are not trying to say that it has to be eliminated. We're just saying the user needs to be informed," said to MIT News Julia Rubin, one of the contributors to the paper from MIT's Computer Science and Artificial Intelligence Laboratory (CSAIL) regarding the topic.

The main source of covert communications is Google, which is understandable as they live on advertisement, followed by Gameloft, InMobi, Millennial Media, Mopub, Mobileleads, Tapjoy, Facebook, and Flurry. As previously said, the biggest problem here is that users are not informed of this secret communication and this is something that can deeply affect the performance one's device and a user's privacy. If you are curious to read more about the subject, just check out the whole research on the source link below. 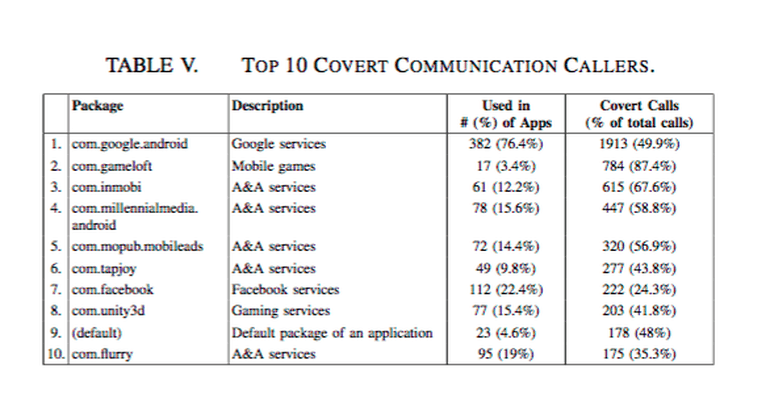