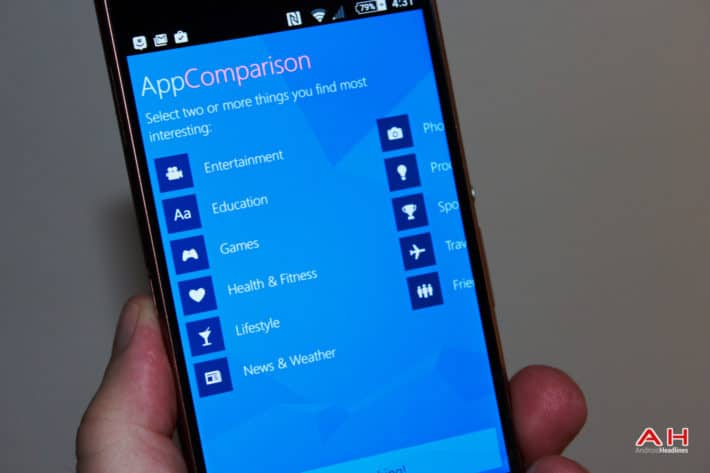 Microsoft is certainly making as many attempts as possible to make their software more open to those on other platforms like Android, but that doesn't mean they're going to stop trying to entice consumers to pick up a phone running Windows 10 instead of sticking with the competition. It's been widely known for quite some time that Windows phones have not been the best place to search for a wealth of applications, but Microsoft is working diligently to try and change that just as much as they have begun to open a cross-platform mentality with their services. As part of this initiative, Microsoft has launched another Android app, although this one is aimed at highlighting the apps you might find on Windows 10 powered mobile devices instead of providing you with a service you can continue to engage with as a happy Android user.

It's called App Comparison, and its entire purpose is to match up apps you have installed on your Android device to those which exist on the Windows 10 platform. While this might seem pointless, the goal it to point out that the app store on Windows 10 enabled phones is growing, and although there may not be much there now, there's no telling how much it might change in the future as Microsoft works towards growing its app base. To do this, though, they'll need to entice developers, which still might prove difficult as developers haven't been too keen on Windows in the past for the simple fact that users weren't coming to the platform in droves. Thus the cycle went round and round as users wanted apps before they made the jump, but developers wanted users before they decided to develop.

If users are considering a switch to Windows 10, the first step in making the transition as simple as possible would be to install App Comparison and see which apps they already use on Android are available on Windows 10 as well. In addition to finding matched apps, it also recommends others based on what you're using that you might find to be something useful. It's a pretty straightforward and basic offering, and although it may not have much use to diehard Android fans, it serves its purpose for anyone wanting to check out a Windows 10 device.