Skip to content
Trusted By Millions
Independent, Expert Android News You Can Trust, Since 2010
Publishing More Android Than Anyone Else
5
Today
65
This Week
820
This Month
3818
This Year
121428
All Time Yesterday was a big day for Huawei, the company has unveiled their newest flagship, the Mate 8 phablet. This handset was supposed to launch a while back, but Huawei decided to wait until now to release it so that they can include their newest SoC in there, the Kirin 950. That being said, we’ve already talked about this handset at length, but are here to look at it more closely now considering the fact that synthetic benchmarks have surfaced in China. That being said, let’s see what’s what, shall we.

The Huawei Mate 8 is fueled by the Kirin 950 64-bit octa-core SoC along with a Mali-T880 GPU for graphics. This handset was benchmarked by AnTuTu (prior to launch) a while back and managed to score 79,131 points, which was impressive, but according to this new benchmarks, the Kirin 950 might be even more powerful than we thought. The benchmarks were fired up again by AnTuTu, and it seems like the phone managed to score 94,250 points this time around. Keep in mind that the second score was measured after the launch, so it’s possible that the first benchmark was performed on a demo device. Now, this is around 25,000 points more than the Galaxy S6 & S6 Edge handsets which are powered by the Exynos 7420 SoC, but keep in mind that those two phones ship with a QHD display while the Mate 8 comes with a 1080p panel.

The Huawei Mate 8 will be available in Q1 2016 in China, and will probably roll out to additional markets soon after that. The Mate 8 features a 6-inch 1080p (1920 x 1080) display along with 3/4GB of RAM and 32/64/128GB of expandable internal storage (up to 128GB via microSD card). The device is powered by the Kirin 950 SoC, and a 4,000mAh battery is also a part of the package. Android 6.0 Marshmallow comes pre-installed here with Huawei’s EMUI (Emotion UI) 4.0 skin on top of it. The 16-megapixel OIS camera is available on the back of this phone, and an 8-megapixel snapper can be found up front. There are two SIM card slots available on the inside, and you also get 4G LTE connectivity here. The Mate 8 is made out of metal, and sports a fingerprint scanner on the back. 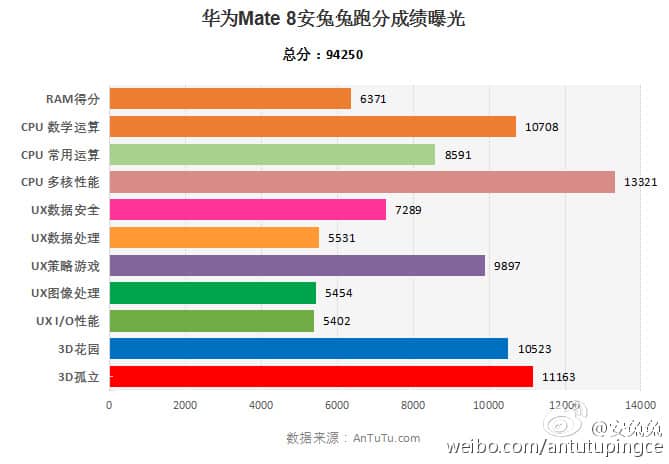