We’ve witnessed rumors that Huawei’s semiconductor business unit, HiSilicon, is preparing to announce and release their next generation System-on-Chip, the Kirin 950, later this week. The Kirin is set to be based around eight individual application cores organized into two clusters. There will be a quad core cluster of ARM Cortex-A53 application processors, which are designed for the less computational duties and are battery efficient under such circumstances. The other cluster will consist of four ARM Cortex-A72 cores, the successor application core design to the Cortex-A57, which is used in current generation chips such as the Qualcomm Snapdragon 810 and Samsung Exynos 7420. For the Kirin 950, this is said to be constructed on a 16nm processor die size, offering power saving and performance advantages compared with some of the current generation chipsets (but not the Samsung Exynos 7420, which is constructed on a 14nm process size).

The exact maximum clock speeds that the Kirin 950 will run at may well depend on the host device and we have seen rumored maximum speeds of over 2.0 GHz. And the ARM Cortex-A72 has several improvements over and above the ARM Cortex-A57, which should improve benchmark scores. As such, we are expecting the Kirin 950 to perform well but until today, this was impossible to quantify. However, a device with a model designation of the Huawei NXT-AL10 was spotted going through the Geekbench website database using the Kirin 950 chipset. This device appeared to be running the processor at 1.8 GHz and showed an impressive pair of scores of 1,934 in single core mode and 8,267 in multi-core mode. By comparison, the Samsung Exynos 7420 shows 1,327 in single core and 4,435 in multi-core modes. The Kirin appears to have a considerable performance advantage over the Exynos.

It remains to be seen as to how much of a performance improvement this gives devices in the real world. ARM’s claims that the Cortex-A72 produces much less heat and is therefore better suited for continuous load compared with the A57 could mean that devices powered by the A72 core are capable of performing at high load for longer. It is also important to understand that this device may well be either a test rig of some description (with enhanced System-on-Chip cooling), or an early pre-production machine and the final results are likely to be different. It is still difficult to quantify how much quicker the Kirin 950 will run compared with the Snapdragon 810, Exynos 7420 processors of today, or for that matter how it will compare with MediaTek, Qualcomm and Samsung’s next generation chipsets, based on newer generation application processor cores. 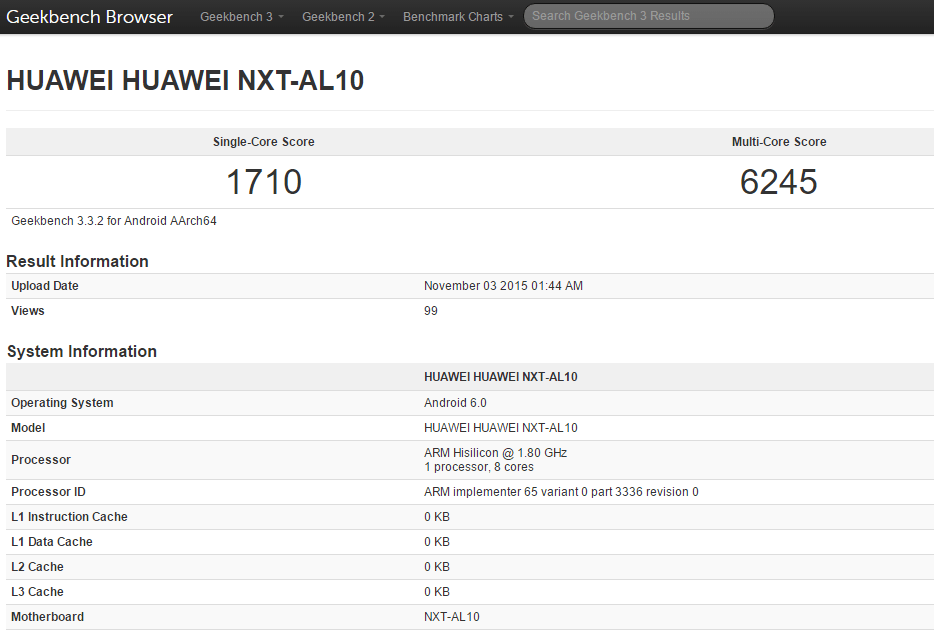