Ever since Huawei announced the Mate S handset back at IFA, we've been wondering if the company plans to announce their Mate 8 phablet. Well, the company's CEO has confirmed quite recently that the Mate 8 is coming, and we've seen quite a few leaks and rumors regarding this smartphone thus far. Huawei has even released a teaser image on the company's Weibo (Chinese social network) account, confirming that the Mate 8 will launch on November 26th. The phone has popped up on GFXBench quite recently, and it has just been benchmarked on AnTuTu as well, read on.

The Huawei Mate 8 (NXT-AL10) has popped up on AnTuTu with a staggering score of 89.630, which is actually the highest score on AnTuTu to date. The Mate 8 will be fueled by the HiSilicon Kirin 950 64-bit octa-core SoC which has been announced a couple of days ago in China. According to previously leaked info, the Mate 8 will feature a 1080p or QHD display (5.7 or 6-inch one) along with 3 or 4GB of RAM (both variants are possible). As already mentioned, the Kirin 950 will fuel this phablet, and the device will be made out of metal. You can expect a fingerprint scanner to be a part of this package as well (quite probably a rear-facing one), and 'Force Touch' has also been mentioned in several leaks. Huawei has already announced a Force Touch variant of the Mate S, so they definitely have the technology to make this happen. Anyhow, the Mate 8 is also said to sport a 21-megapixel snapper on the back, and an 8-megapixel camera up front. The phone will ship in 32 and 64GB internal storage variants, while the 128GB one is also a possibility.

The Huawei Mate 8 will, much like its predecessor, be a high-end phablet. The Ascend Mate 7 is still one of the better-looking devices out there, and the Mate 8 has big shoes to fill. As already mentioned, the Mate 8 will be announced on November 26th, which is actually quite soon. Judging by the leaked benchmarks, the Mate 8 will be a force to be reckoned with, but it remains to seen what will the device look like and perform in real life. Stay tuned, we'll report back as soon as some additional info pops up. 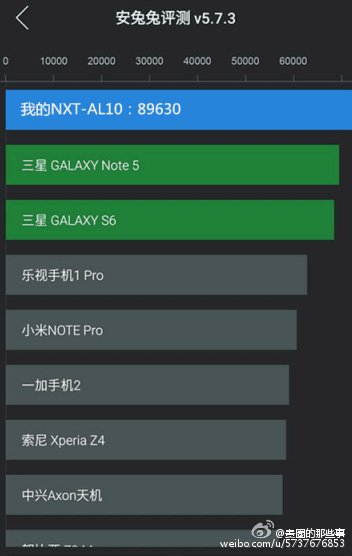