Huawei’s upcoming Mate 8 smartphone is being rumored quite a lot of late. Just earlier in the day, the phone was shown off in all its glory in a few hands-on images. Earlier rumors have also suggested that the device will come with a fully metallic body and include an integrated fingerprint scanner. Now, the upcoming handset from China’s largest smartphone OEM has been leaked again – this time on AnTuTu, if a post on Chinese microblogging site Weibo is to be believed. In any case, Huawei is believed to officially unveil the device next Thursday (November 26th), so the wait won’t be too long anyways, as long as everything goes according to plan.

Of course, a great many gadgets have got leaked on the AnTuTu benchmarking site over the years giving us a good look at the hardware specs of those devices before they were made official. Now, if the recent report is anything to go by, some of the hardware being carried by the Mate 8 seems to be out in the open, thanks to the new leak. The first thing that’s noticeable is that the current leak also suggests the presence of a HiSilicon Kirin 950 under the hood of the Mate 8, something that’s already been rumored for a while now. The chip comes with an octa-core 64-bit chip clocked at a maximum of 2.3 GHz and a Mali-T880MP4 graphics processor clocked at a maximum of 900 MHz. There’s no word however, as to how high or low the default clock speeds will be for the Kirin 950 in the Mate 8.

Coming to the rest of the info about Huawei’s upcoming premium phablet, the device is said to come with the model number NXT-AL10, and score a highly impressive 79,131 points on AnTuTu, but synthetic benchmarks need to be taken with a pinch of salt, as always. The phone will come with Android 6.0 Marshmallow, most probably with Huawei’s proprietary EMUI laid on top. The Mate 8 will feature a massive 6-inch screen that will have a resolution of 1920 x 1080 pixels, and the cameras will be a 16-megapixel unit on the rear and an 8-megapixel unit on the front. Another persistent rumor has suggested that that the handset will come in two different variants, and the AnTuTu listing now seems to bear that out. While the base version is said to come with 3 GB of RAM and 32 GB of storage, the more premium one is tipped to carry 4 GB of RAM and 64 GB of storage out of the box. 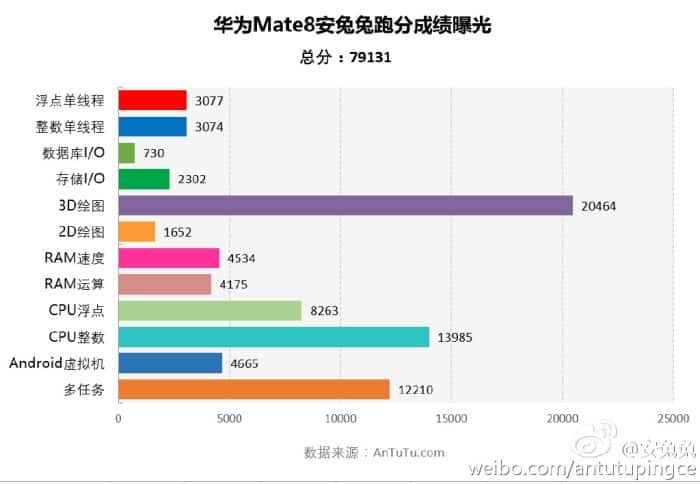