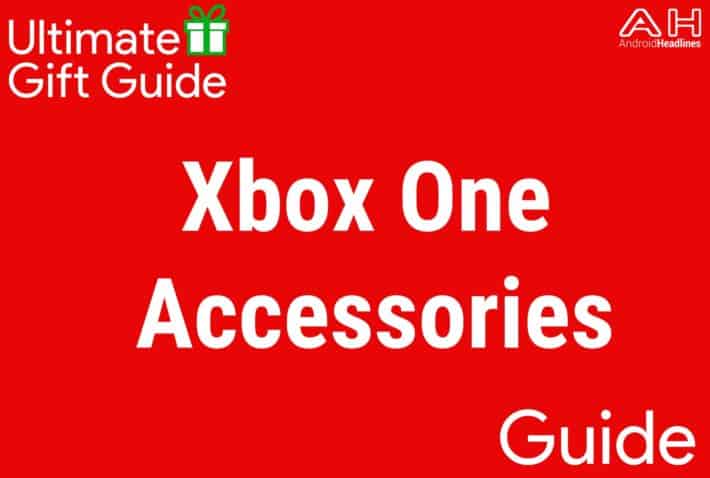 There's no doubt the Xbox One is a great system as is, but you can level up your experience with a few different accessories to make playing games even better. Xbox has a range of different accessories aavailable from extra controllers to a specially made external hard drive so you can store more games, and if you take your gaming on Xbox One seriously you've probably already thought of some of these things. If you yourself don't play games and are looking for gifts for the gamer in your life, here are the top 10 Xbox One accessories to consider.

Nyko Intercooler For Xbox One 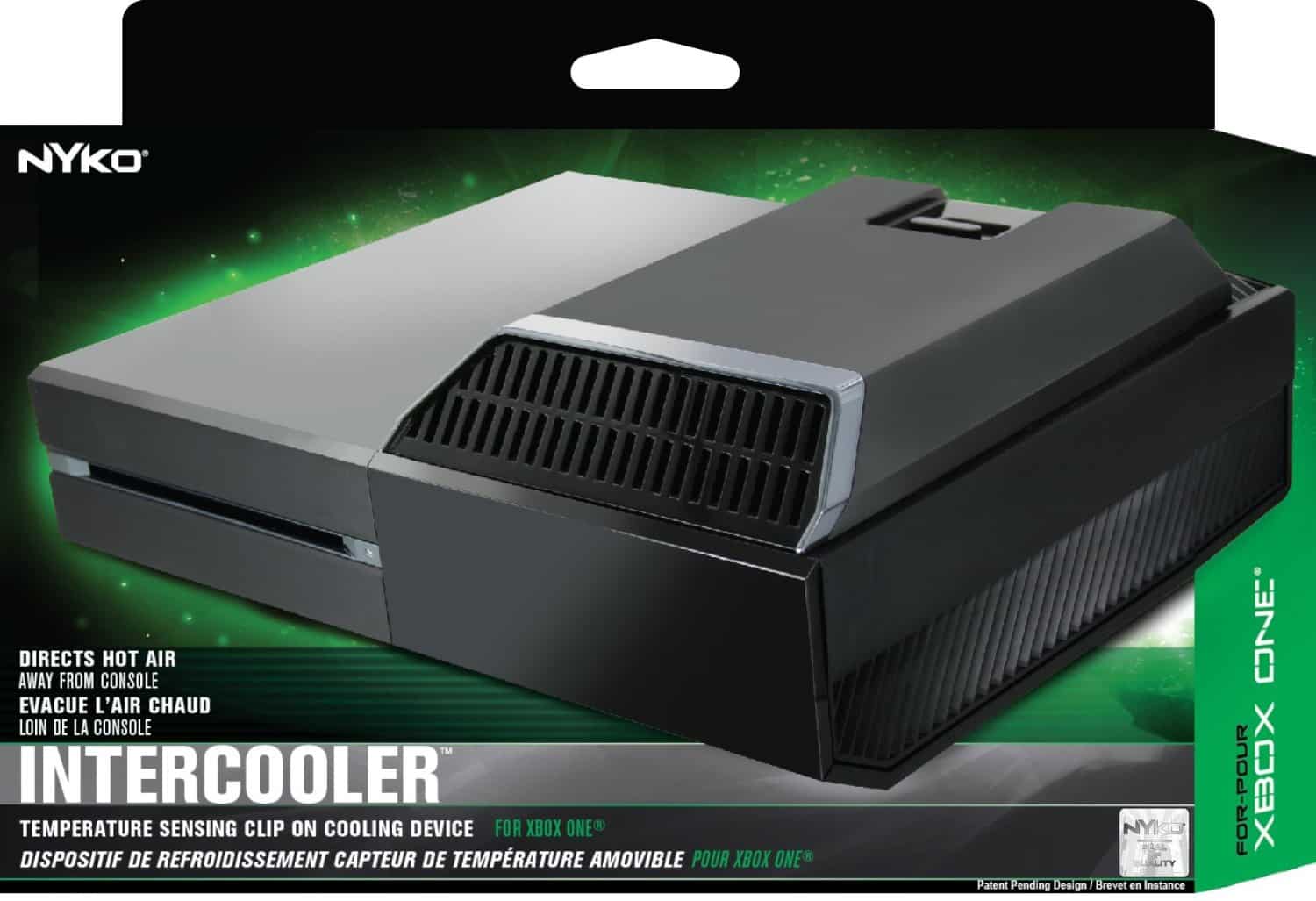 Playing games can be tons of fun especially when you have the time for some serious sessions lasting hours. During this time though the console can get pretty warm or even hot, and if there isn't enough air circulation around the console this only makes things worse. To help keep the Xbox One running at it's best the Nyko Intercooler for Xbox One is a must have item. It mounts to the top of the console and uses a modular design so it fits nice and neat across the top, and it's powered by USB so you can plug it into the Xbox without the need for another power source. When it's on it'll push hot air away from the system to help keep the temp down, and thus helping it run smooth for hours on end.

Buy The Nyko Intercooler For Xbox One From Amazon 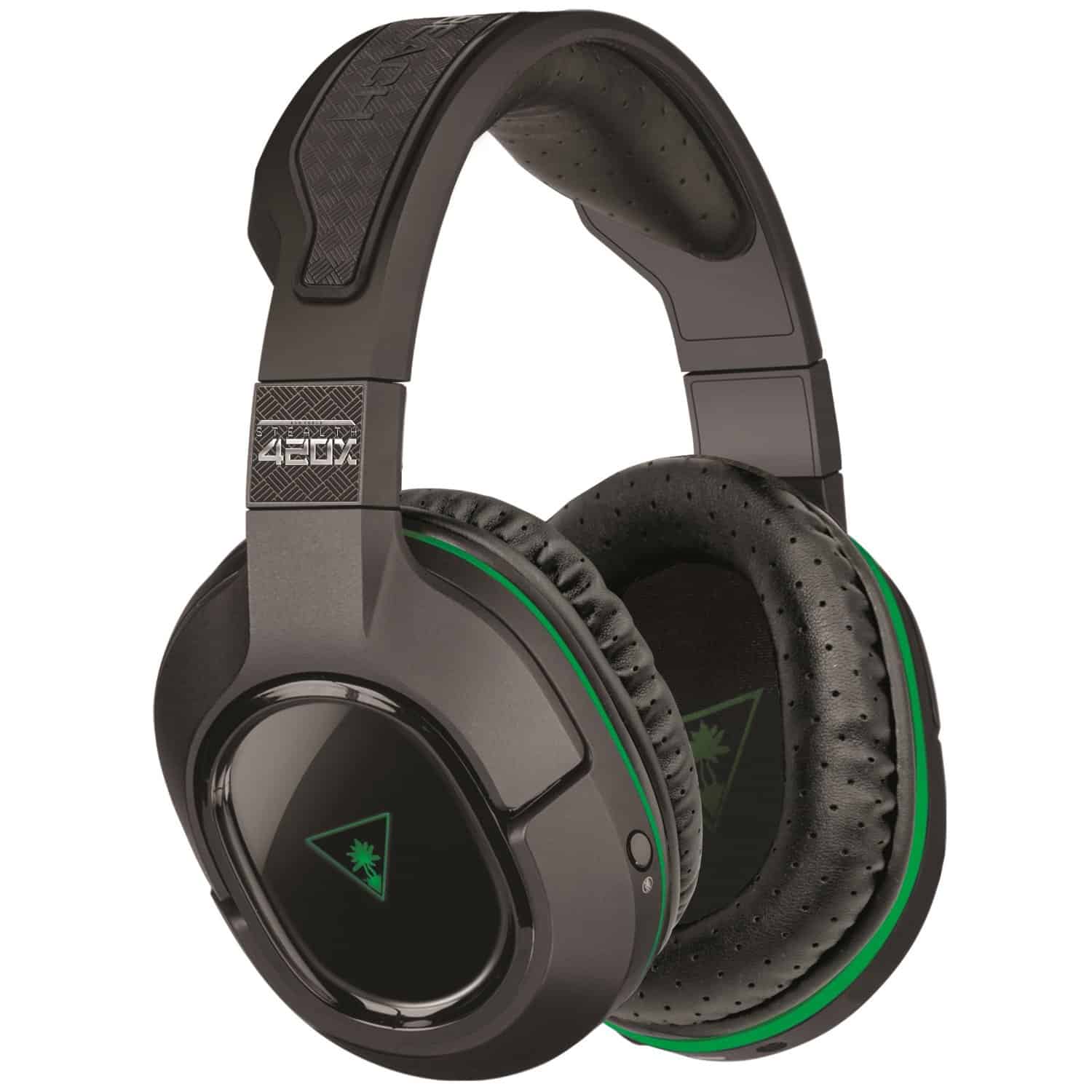 At some point or another a gaming headset should be on the radar for any gamer. For those who are nuts for multiplayer games like first person shooters, team chat can be crucial to the experience, and good quality audio can also make all the difference. Wires are no fun though, and that's why the Ear Force Stealth 420X wireless gaming headset from Turtle Beach is something to consider. It's fully wireless which means you can play without worry of the headset cord getting tangled on things, and you still get crisp and clear audio. It has an integrated mic for chat, and volume controls are built into the ear so you can easily access them. There's even a cool feature called mic monitoring which lets the user hear their own voice so they know how loud theys ound to other players, helping them adjust their tone to a reasonable level.Best of all, the headset doesn't need battery replacements as it contains a rechargeable battery with a 15-hout capacity. 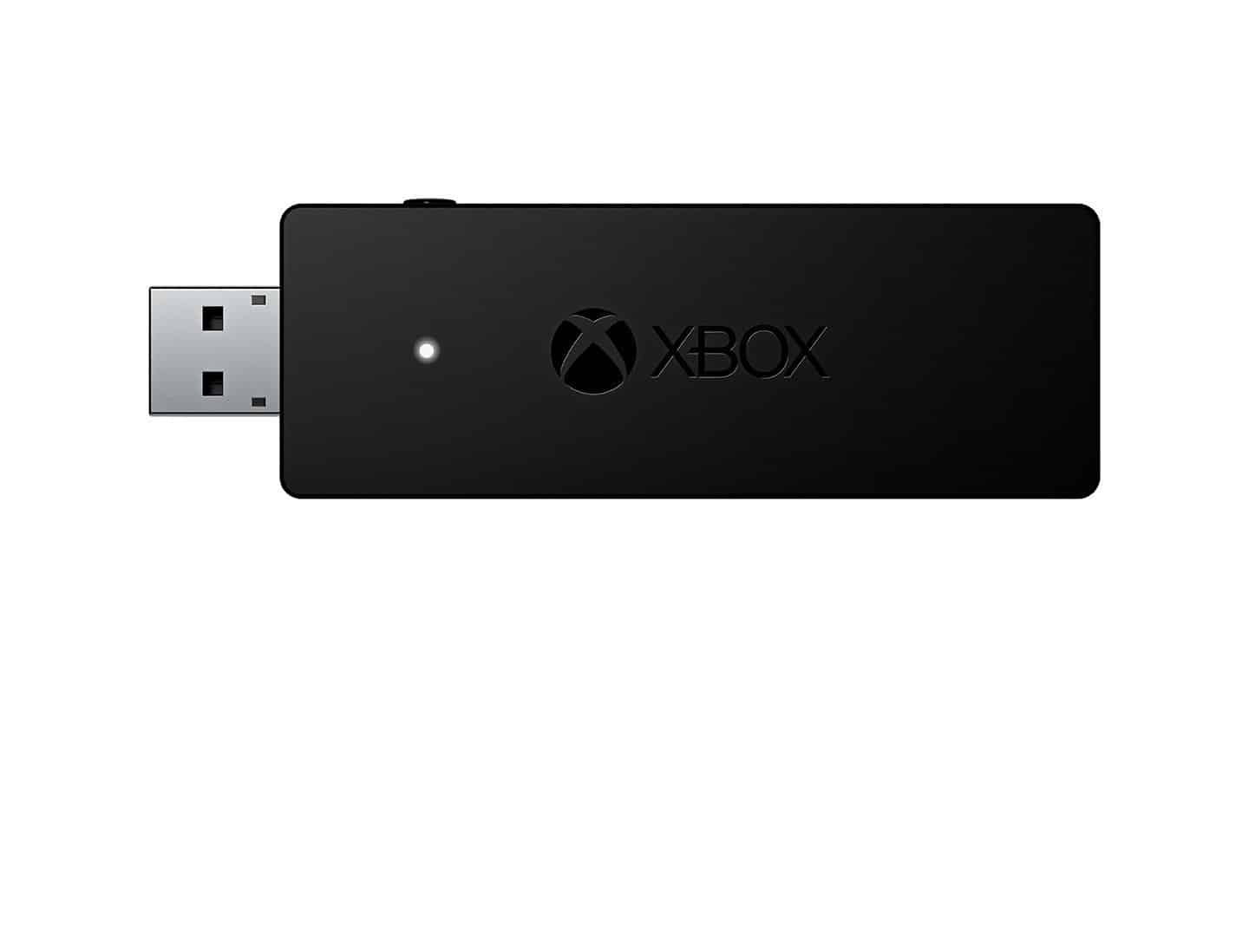 With the coming of Windows 10 and the capability to stream Xbox One games to a Windows 10 PC or laptop, you'll need the capability to connect an Xbox One controller, and you can't do that without the wireless adapter. This little dingle lets you hook your Xbox One controller up to you Windows 10 machine so you can play your streamed Xbox One games, but it also lets you play games that are on the PC as well whether from Steam or other platforms which support Xbox controllers. It easily connects to controllers and if you need to you can use the included USB extender cable.

The Kinect Sensor for Xbox One takes gaming to the next level for a certain number of game titles, and lets you use your movements to play thanks to the movement tracking technology and cameras in the Kinect. With the sensor hooked up, you can play games using your movements gestures, and voice, and you can also use the Kinect to voice control other aspects of the system too like playing videos and opening up apps and games. You can also use the sensor for HD skype calls from the TV, and this particular bundle comes with a free digital download of Dance Central Spotlight.

Buy The Xbox One Kinect Sensor From Amazon 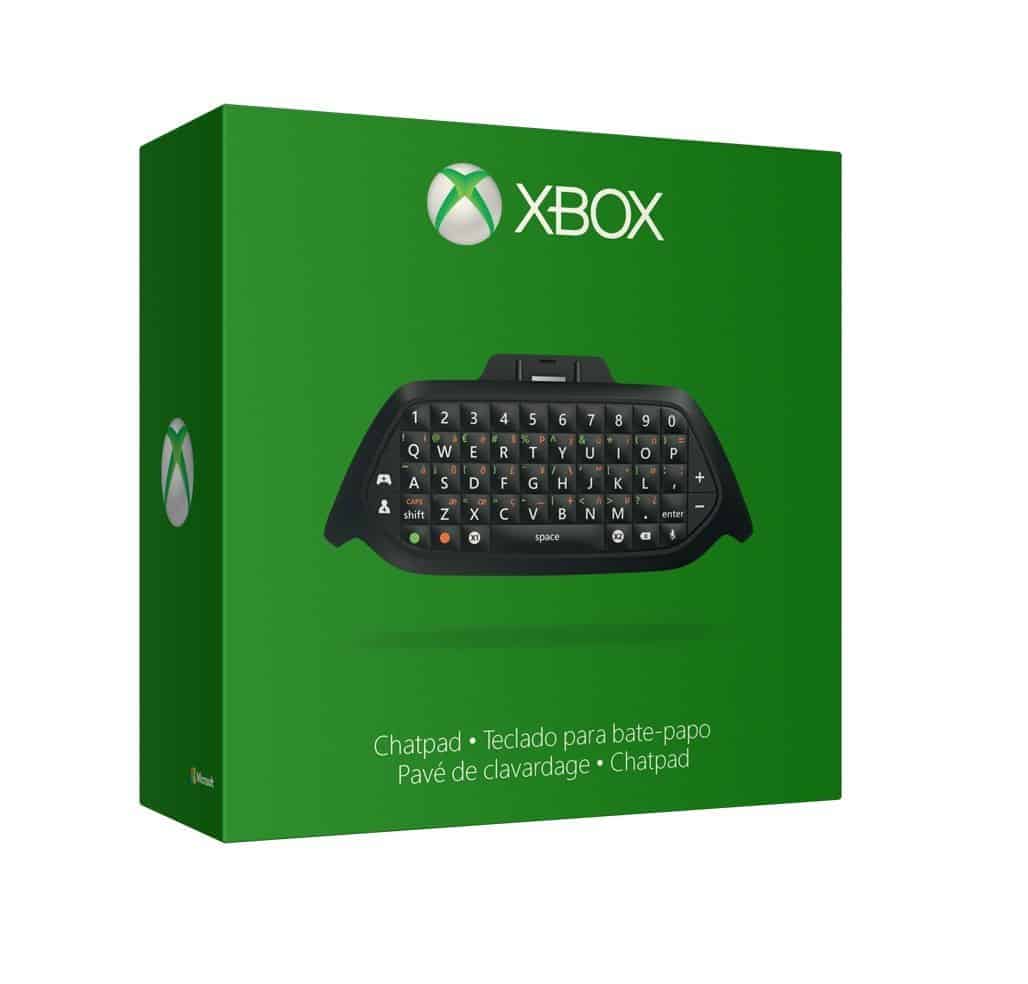 For anyone who talks to others on their console by sending messages or plays games with in-game chat, typing using the on-screen keyboard with Xbox One is not ideal. It's slow, and if you try to speed things up you can have a tendency to mistype some things. The Xbox One Chatpad is the perfect solution as it allows you to type easily and quickly with a tool most people should be familiar with if they text or message on their phone; your thumbs. the chatpad plugs into the port on the bottom of the controller (the chat headset port) so it's accessible, and it features a full QWERTY keypad so you have every button you need. It's also got a port on the bottom for a chat headset so you aren't having to decide whether to use the chat or the chatpad. You can use both. The chatpad also comes with buttons that you can program to control certain Xbox One functions, and the entire keypad is backlit so if you're playing late you can still see what you're typing. The chatpad is also compatible with Windows 10, so if you're using your Xbox One controller with the Wireless adapter for Windows to play games on your PC, you can chat with friends and type using the chatpad there too. This also comes with an included chat headset.

Buy The Xbox One Chatpad + Chat Headset From Amazon 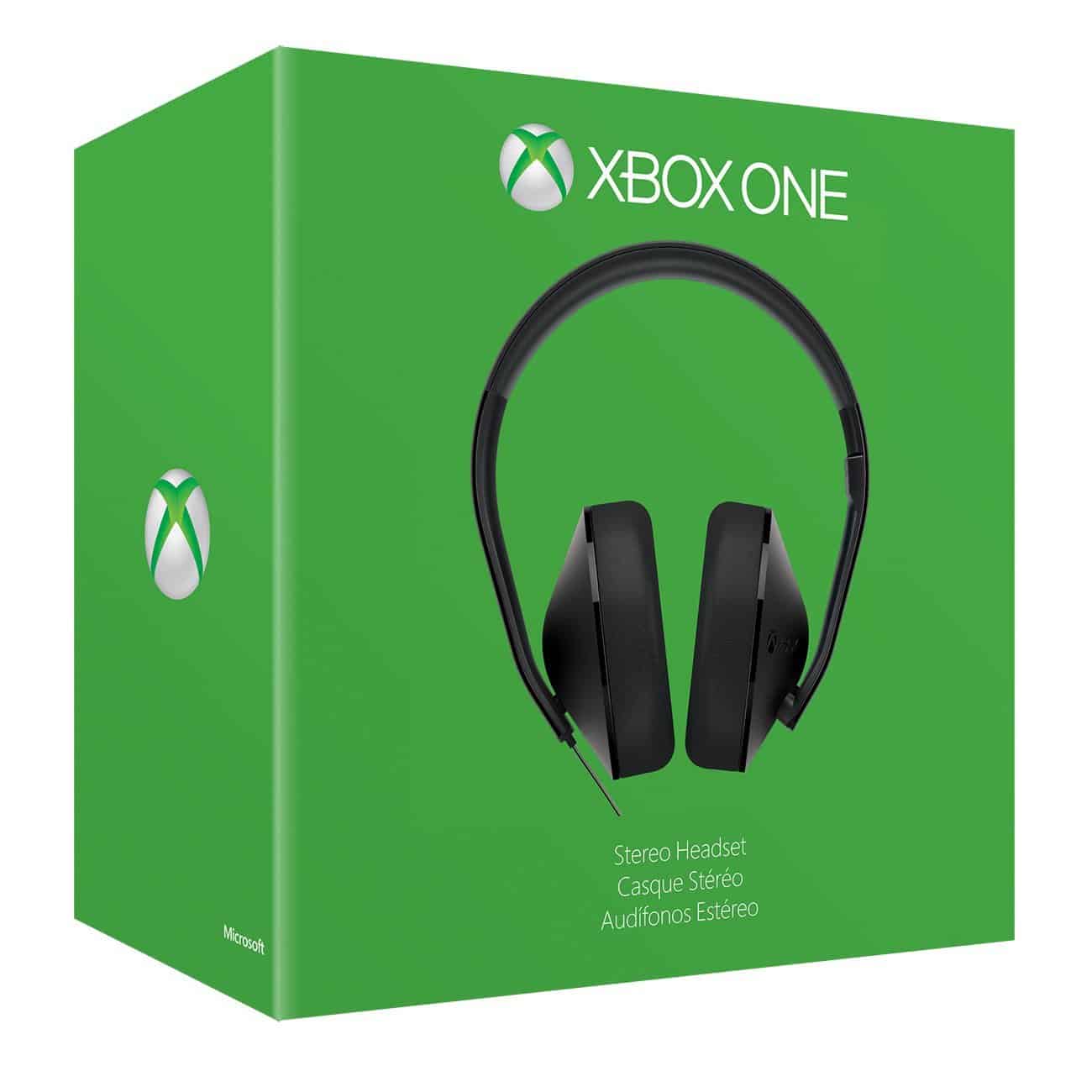 If you like chatting with friends on Xbox Live when you play games, but aren't fond of the standar chat headset, Microsoft's official stereo headset option gives you better quality audio. It has a detachable mic if you just want to hear the sound more in your ears but aren't planning on chatting, and although is a wired option unlike the Ear Force wireless model listed above, it also costs less. If you are using the chat, it contains a unidirectional mic so the headset can always pick up your voice, and it plugs right into your wireless controller so you're still wireless from the console.

Buy The Xbox One Stereo Headset From Amazon 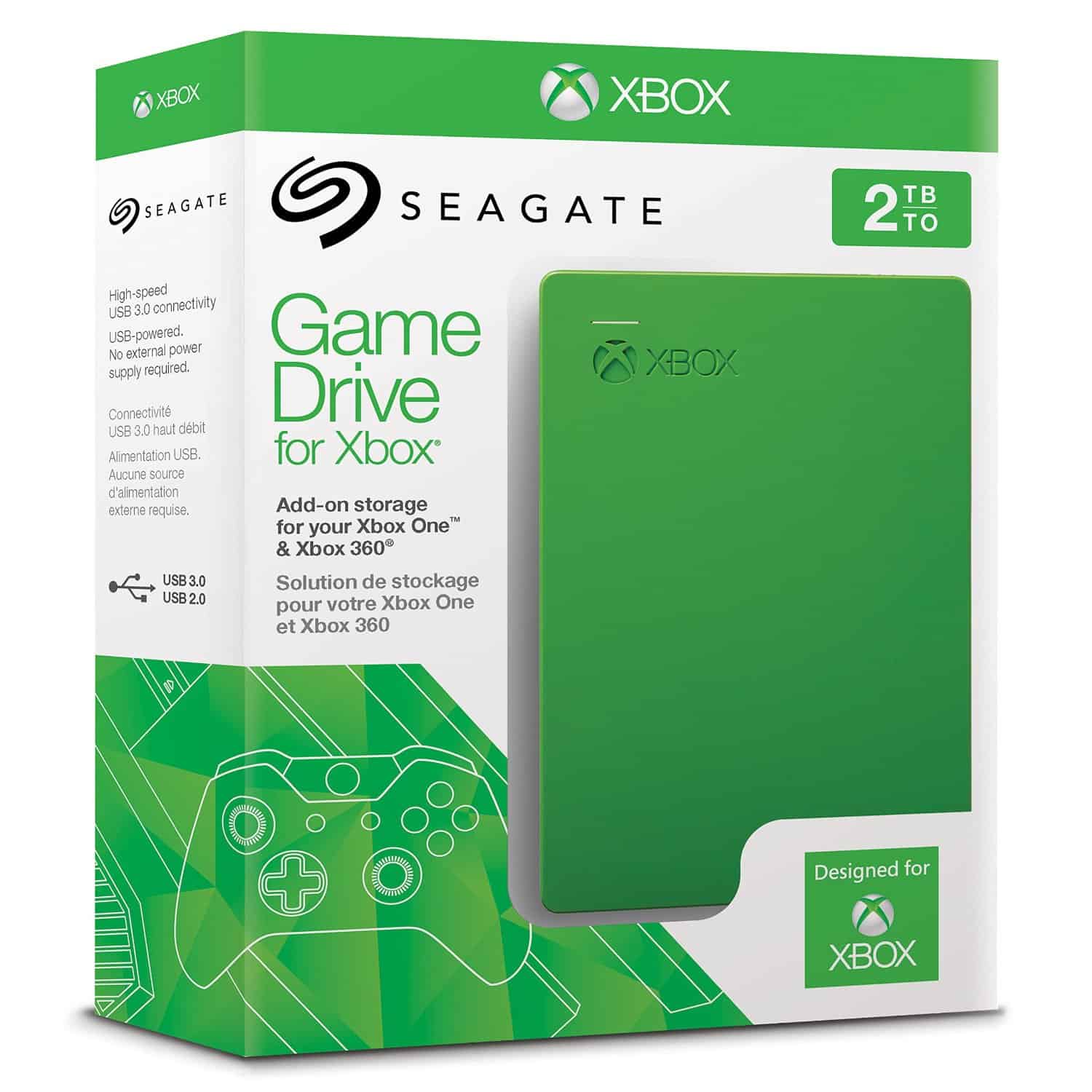 Hard Drive storage is a problem these days with the consoles, and the Xbox One is no different here. You can run out of space rather quickly and if that happens you're out of luck the next time you want to download or install a new game. To combat this, you'll need additional drive storage and there's no better option than the Seagate 2TB game drive for Xbox. Not only was it designed exclusively for Xbox, but it works with both Xbox One and Xbox 360 consoles. It's portable and pocket frioendly so youc an take it with you or leaver it at home without taking up much space in your console setup. It plugs in easily with a plug and play design so there's no having to install anything into the console itself making setup a snap. Best of all, it's additional storage on top of what yourr Xbox One or Xbox 360 console already has inside, so if you're sporting a 1TB Xbox One option, you've now got 3TB of space for asll your games. No power needed here as the drive plugs directly into your Xbox One or Xbox 360 USB port.

Buy The Seagate 2TB Game Drive For Xbox From Amazon

BD & A Charging Station For Xbox One 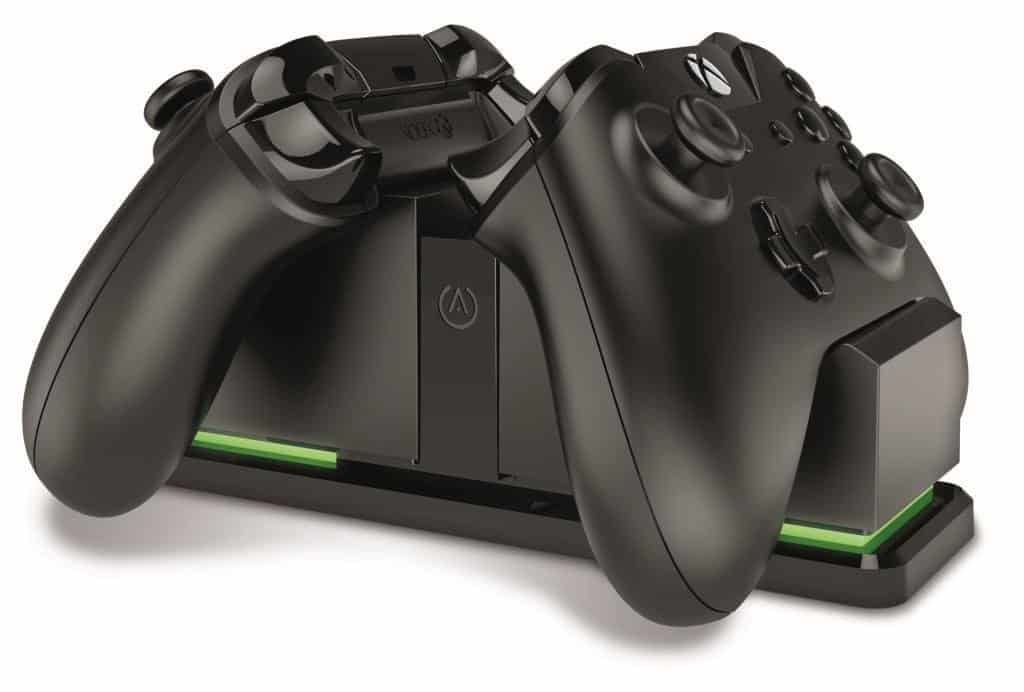 There's asbsolutely nothing worse than being right in the middle of a game and having your controller die on you. With the Xbox One wireless controllers, in this situation you'd havce to go find a new pair of AA batteries unless you're using the play & charge kit that plugs into the Xbox system, but then you'd have to remember to plug it in whenever you're done playing. To make things a whole lot easier the BD & A charging station is a dock for your Xbox One wireless controllers and can charge up to two units, and it comes with 2 rechargeable batteries (one for each controller) so you newver have to worry about AA's again. The charging station itself plugs into an AC power outlet so it doesn't take up any USB ports on the system, nor does it use batteries itself. Eager to play? The charging station has color-coded LED lights to indicate the status of the power on the controller so you know how much charging may be left, and the station even has two modes of use; charging, which you dock the controller and click down to initiate the charge, and storing which you can simply click up from the charging position to store the controllers so they're nice and neat and out of the way.

Buy The BD & A Charging Station For Xbox One From Amazon 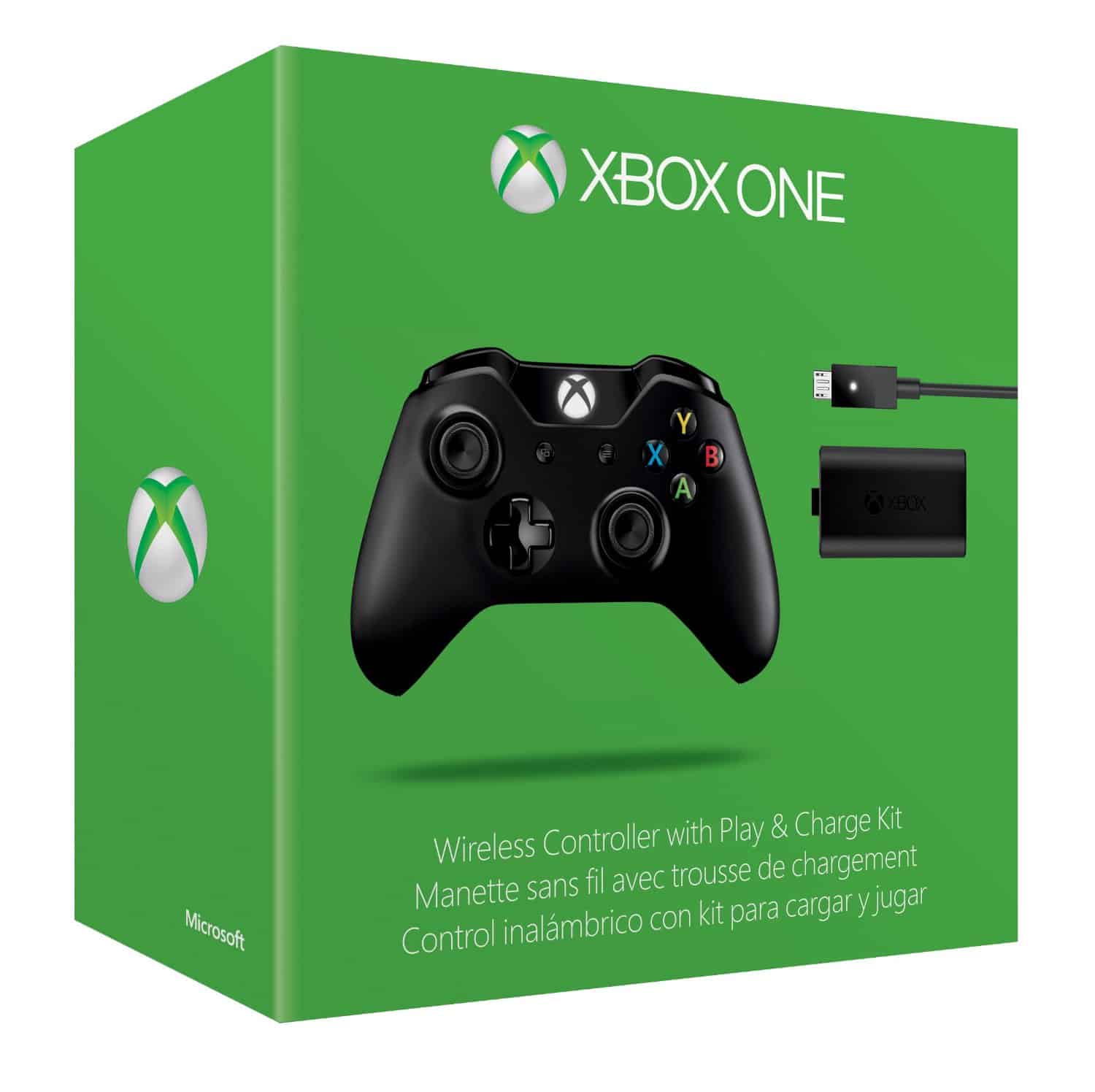 If you're in need of an extra controller for your Xbox One, the wireless controller with the Play & Charge kit is the way to go. It comes with the rechargeable battery pack made specifically for Xbox One wireless controllers so youc an simply recharge when you're done and do away with AA batteries. To charrge it up just connect it to the included charge cable that plugs into the Xbox One USB port, then unplug when it's done for some more gaming. The charge kit will work both when the console is in standby mode, and when you're playing so you canb keep the game going, and of course, it'll charge when you're not playing as long as the system is on. 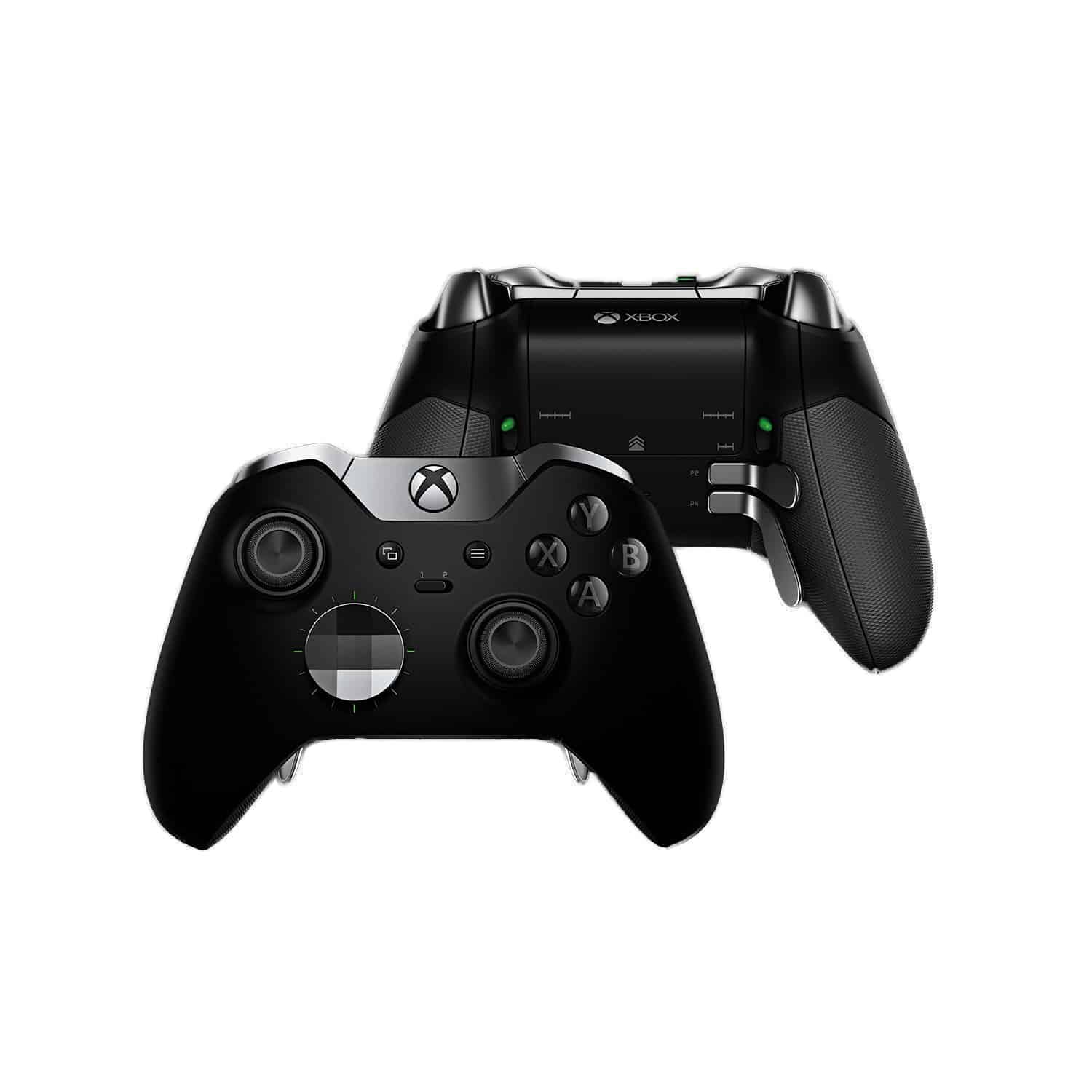 If you're serious about your gaming on a competetive level or just want an edge in online multiplayer, the Xbox One Elite Wireless controller is what you need. It comes fully equipped with all of the same buttons as the original Xbox One wireless controller, but it also has included paddles on the back, and it comes with a set of 4 paddles in total, 6 thumbsticks, a set of 2 D-pads, 2 AA batteries and a USB cable. It also comes with a carrying case so you can pack it up when you're ready to take the game with you elsewhere, and with the hair trigger locks on the back you can fire at a quicker pace. Microsoft also allows customization of the contrroller with an app you can connect the controller to. With the app gamers can adjust the button mapping, the trigger senstivity, and more, giving you complete control on how you use it.

Buy The Xbox One Elite Wireless Controller From Amazon