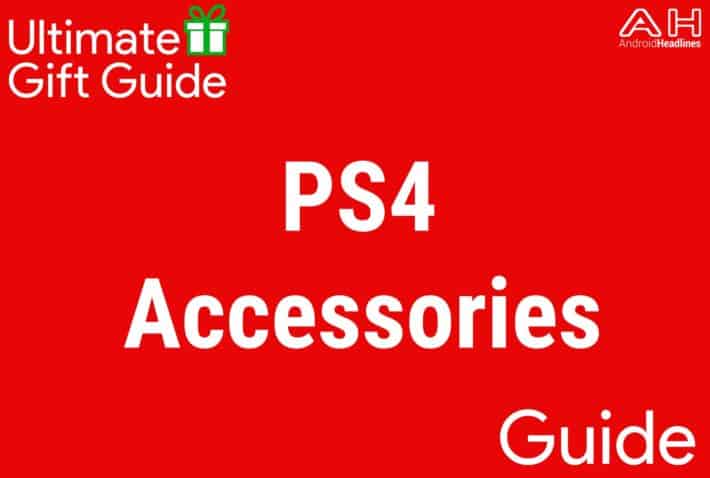 With the holidays coming up, it's going to be time to start looking at gifts for the special people in our lives and for those who already have a PS4 console, nothing makes the setup feel complete like accessories to enhance the experience. Whether it's extra controllers, cooling fans, stands for the console itself or things to help you mobilize your PS4 gaming, this list should help to showcase the top 10 best accessories any PS4 owner needs. 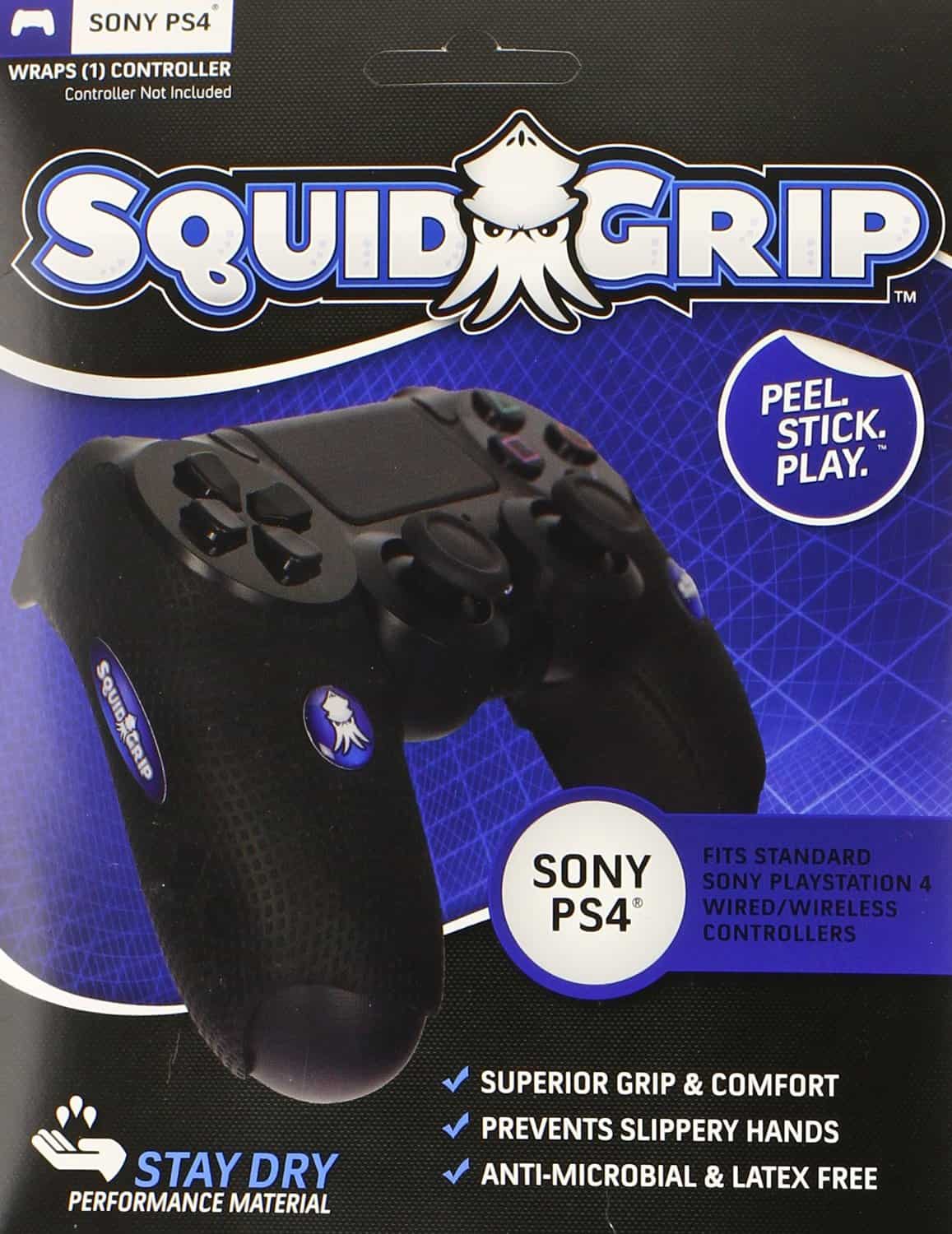 We've all been there. Hours long gaming sessions turn from immense fun to downright annoying when you can't even hold your controller correctly. It's not necessarily because your hand is tired, but simply because you've been playing for 4 to five hours on the couch and your hands are now a little bit sweaty. This is where Squid Grips come in handy and allow gamers to comfortably hold and grip their controllers for hours on end without the feeling of the controller slipping out of your hands. They're easy to apply to the controller as you just peel and stick them on, and the surface of the grips not only helps to wick away sweat, it's made from an antimicrobial material too.

Buy the Squid Grip for DualShock 4 Controller From Amazon 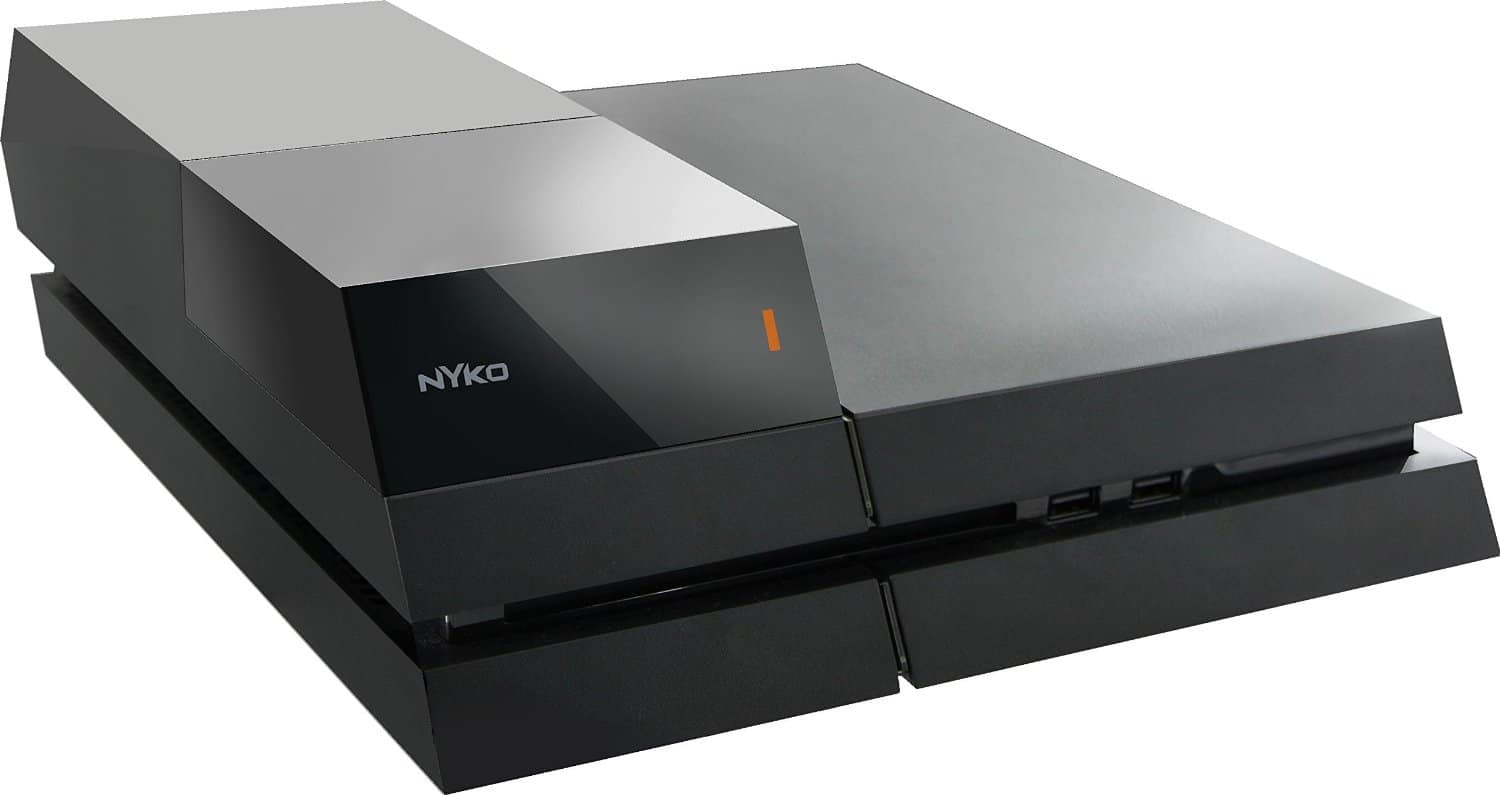 The PlayStation 4 is a great system to have, but for those who play a lot of games the hard drive can fill up quickly. At only 500GB it goes quicker than one would think especially if all of your games are digital. Thanks to Nyko, it's possible to easily expand the amount of internal hard drive space on your PS4 with the Nyko Data Bank, which fits neatly and securely on top of the PlayStation 4 face plate section of the console. This will replace the standard face plate portion but does not actually contain an integrated storage drive, it does however allow for the use of 3.5" drives as opposed to the 2.5" drives like the one already in the PS4. With this, you can swap out the 2.5" drive for one of the 3.5" size which are cheaper. This will also allow you to upgrade the storage capacity to 2TB so you'll less likely ever run out of space. 3.5" drives also usually come with a faster write speed, which should help the load times of games as well. As an added bonus, the data bank also has an LED light integrated into it which tells you whether the PS4 is saving game progress, or accessing the hard drive storage so you know what it's doing at all times.

Buy The Nyko Data Bank For PlayStation 4 From Amazon 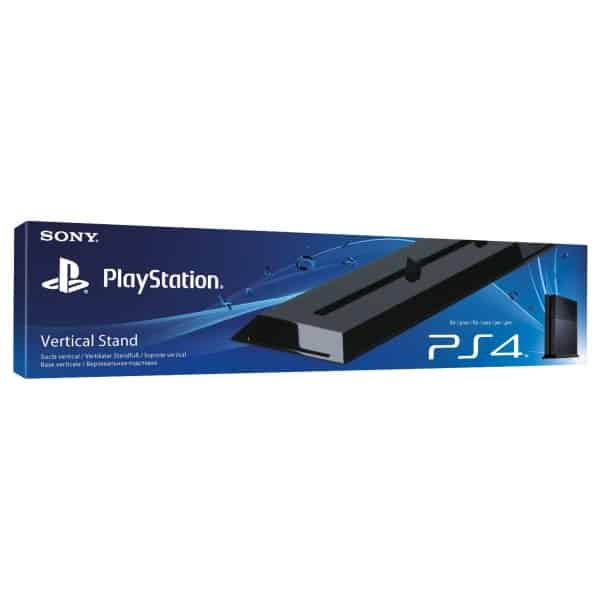 There's not much to say here about this particular product except that it helps you to stand up your PS4 system in a vertical orientation. This can help you save some space when you're setting the system up, or it can simply be to make things look a little cooler and cleaner. Either way, it's a nice addition to have if you don't want your console sitting flat. On the bottom of the stand there's an easy indicator to tell you which way to connect the system, and dials help you easily lock and release the PS4 by simply twisting them. 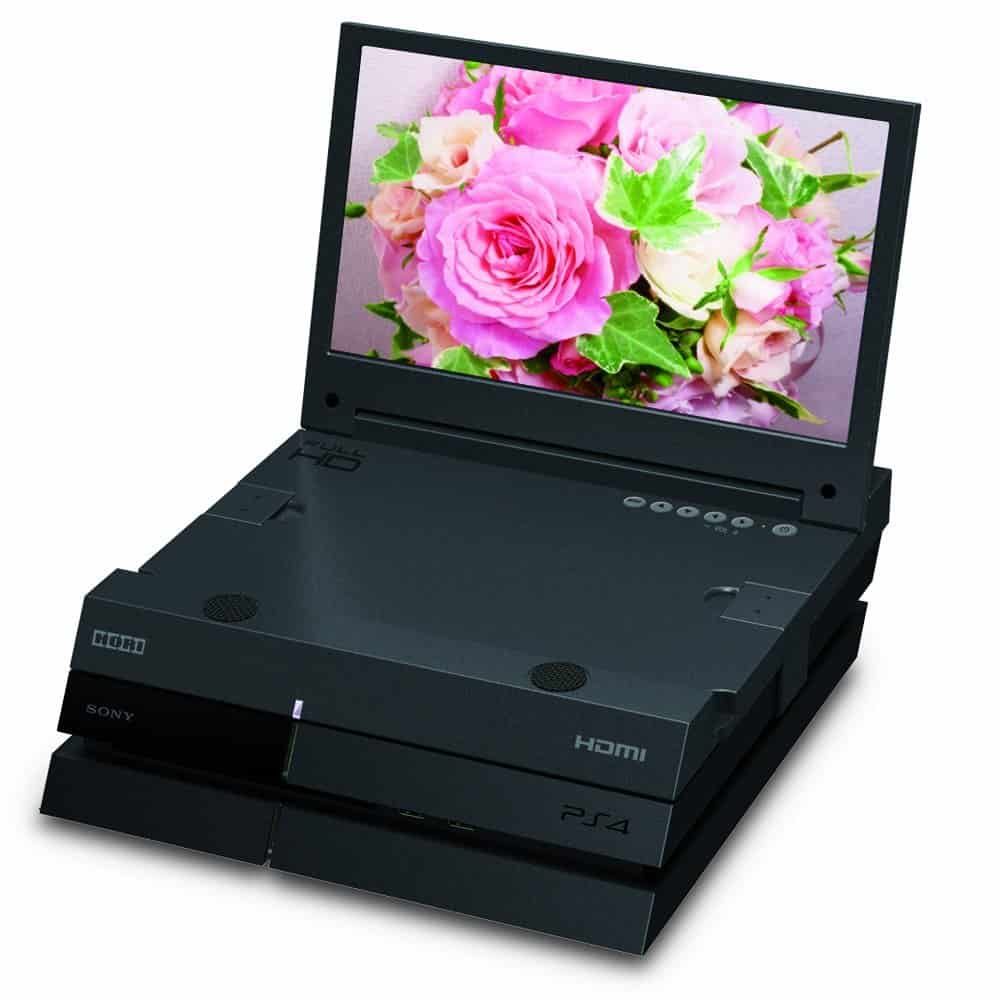 Another perfect idea for either saving space or taking the console with you where they may not be a suitable TV to hook the system up to, the HORI Full HD monitor for the PS4 fits neatly and securely on top of the system and matches the shape so it looks as though it's part of the console. The screen is 11.6-inches in size and is 1080p Full HD resolution so games will look nice and crisp, and of course it has the HDMI input which would certainly be needed. The HORI monitor is built with dual stereo speakers integrated into it, so you can play your games while listening to the audio output of the monitor, or if you prefer you can plug headphones into it for some privacy or use a set of external speakers that you like. Buttons sit on top of the setup and are visible once you flip up the screen which manage volume and power of the device. This device is officially licensed by Sony Computer Entertainment America.

Buy The HORIO Full HD Monitor For PlayStation 4 From Amazon 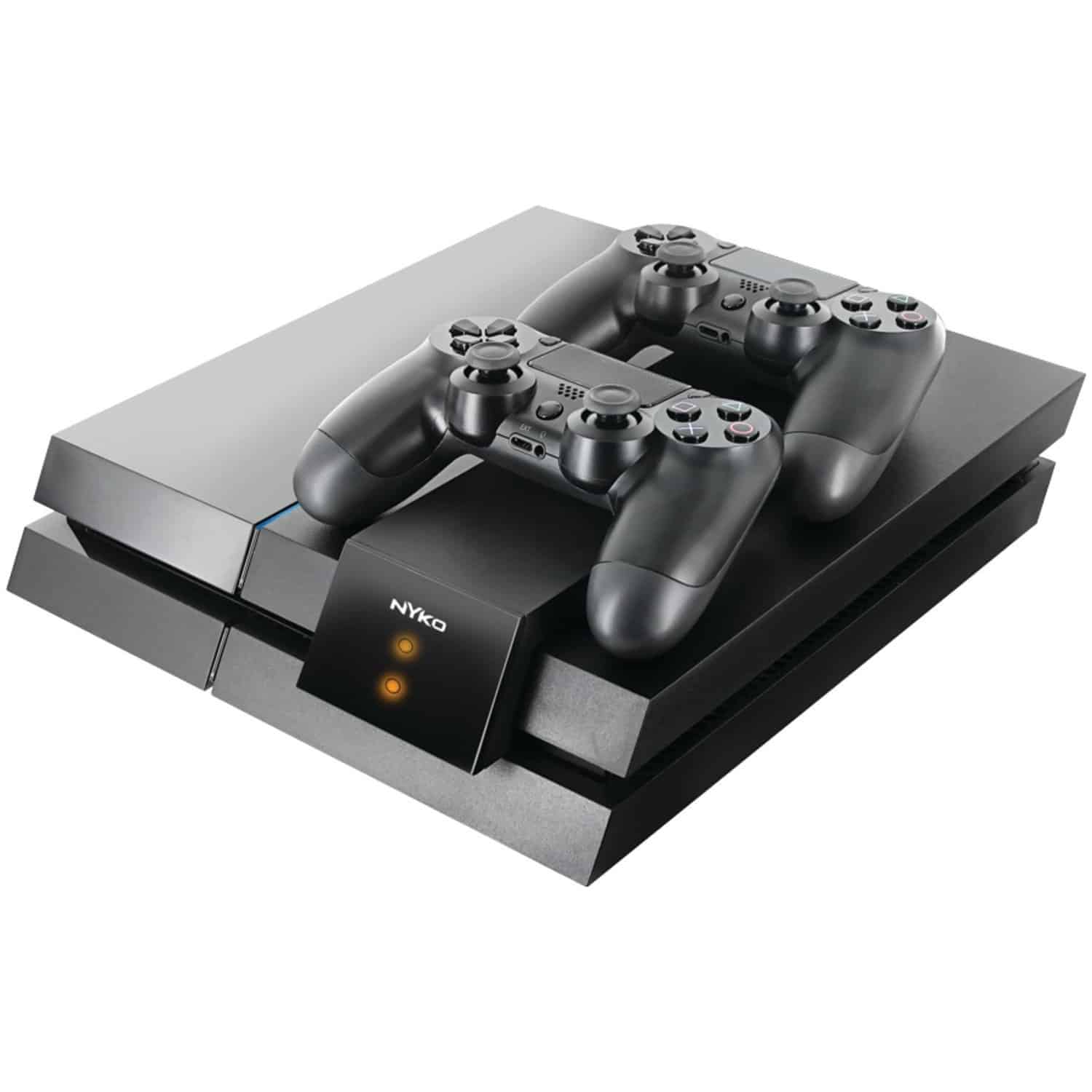 Since the controllers on the PS4 are wireless, you can charge them in multiple ways, but only one of those ways comes standard without buying extra equipment, and that's plugging them into the console's USB ports on the front.If you want something a little more slick and without having to use cables, this modular charge station from Nyko for the PS4 makes it easy to charge your controllers with no cables and without having a separate charging base to stick them on. The charging unit fits onto the top of the PS4 system and plugs into the USB ports, and can charge two DualShock 4 controllers at a time by using the included dongles that you attach to the controllers, which allow them to dock onto the charging station for power. Not only will this save space and keep things completely wireless, but it's also compatible with other Nyko modular accessories, like the Nyko Data Bank for example.

Buy The Nyko Modular Charge Station For PS4 From Amazon 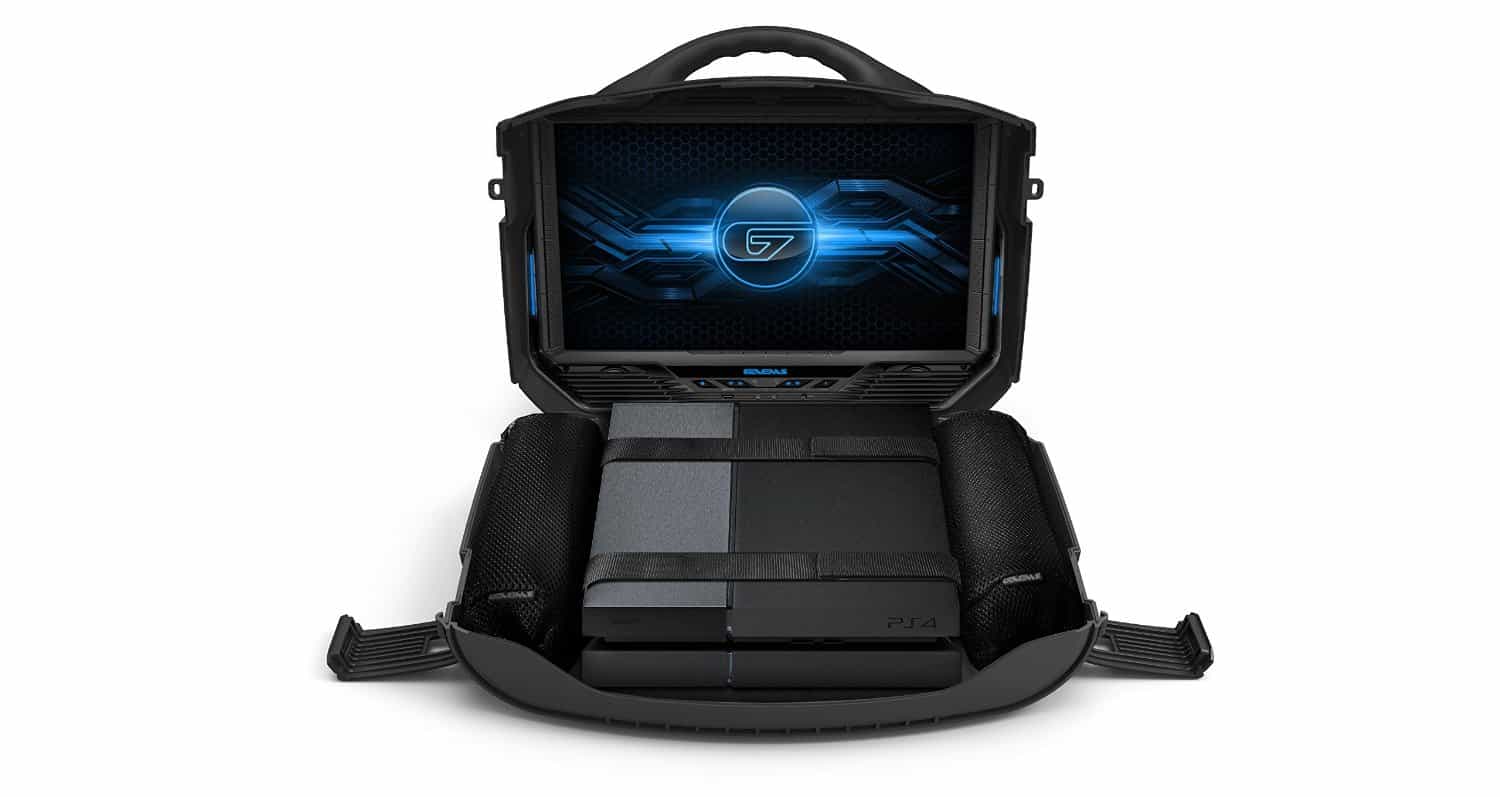 If you live on your console and can't live without when traveling or when away from home, the Vanguard model personal gaming environment from GAEMS lets you store, carry, and connect your PS4 console to play on the go. The inside of the lid has an integrated 19-inch LED HD display with built-in stereo speakers, but it also has dual ports for plugging in headphones if you prefer. While you secure and store your console in the middle, storage bags on either side will let you store your controllers and power supply, and any other accessories you may want to take with you. The inside of the case is equipped with LED lighting to give it a sleeker effect, and the shoulder strap on the outside lets you tote it around easily. There's also an included remote so you can power it on and off more easily. 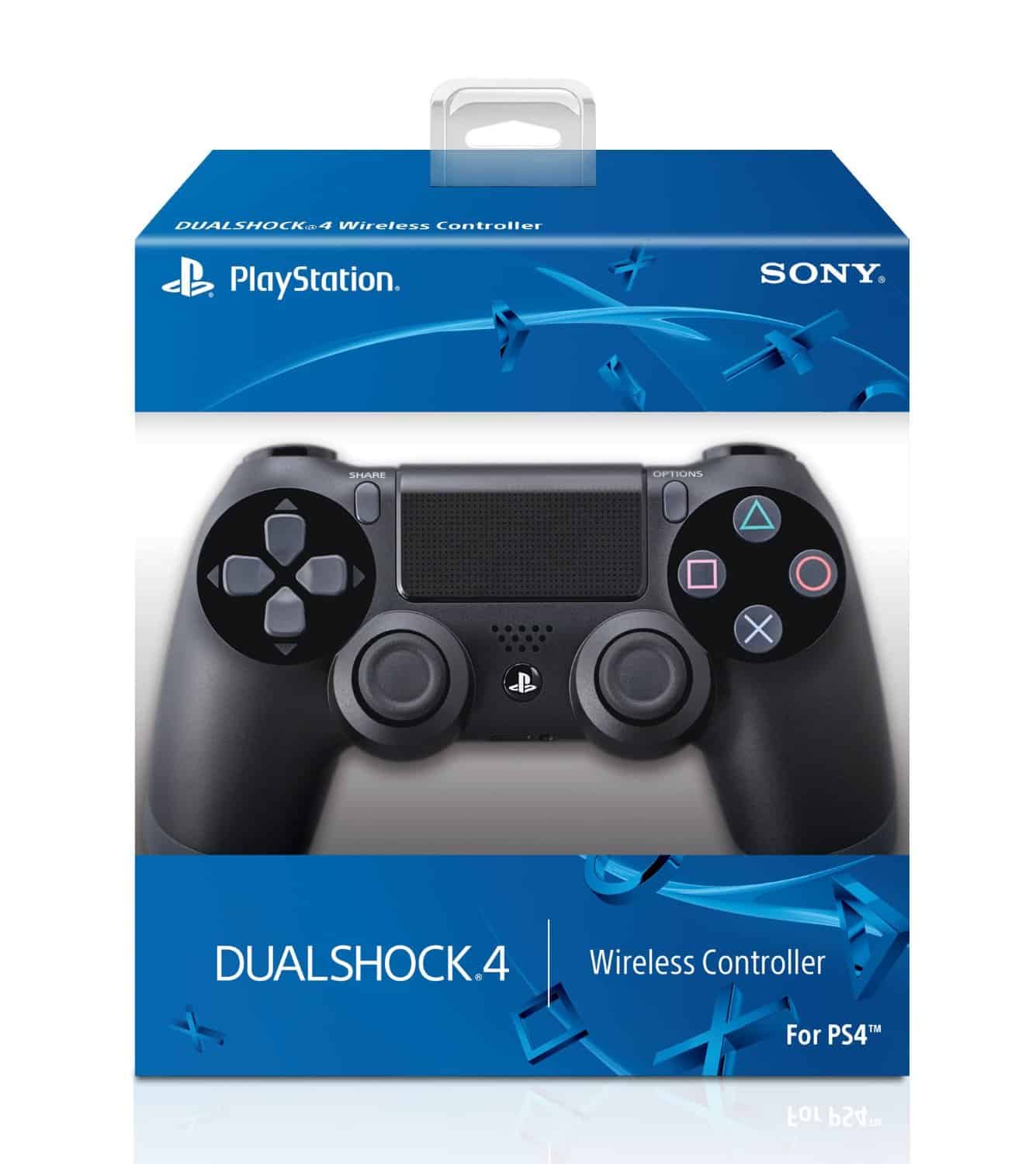 Every PS4 owner could use another DualShock 4 controller if they ever plan on playing anything with others on the same console. While the system comes with one already, you can pick up extras and connect up to four controllers to one system for games that allow local multiplayer of that many people. The DS4 controller is wireless and can charge wirelessly or with the included USB cable that you can plug into the PS4 system. It also has a port on the bottom of the controller where you can plug in headphones just in case you want to listen to game audio in the headphones instead of from the TV. The DS4 features dual thumbsticks and a D-pad for controls, the four button setup to the right, left and right trigger and bumper buttons up top, as well as the new touch pad in the middle with the share and options buttons on either side of it. There's also the PS button in the middle to take you back to the PS4 homescreen at any point, and it comes in multiple colors. 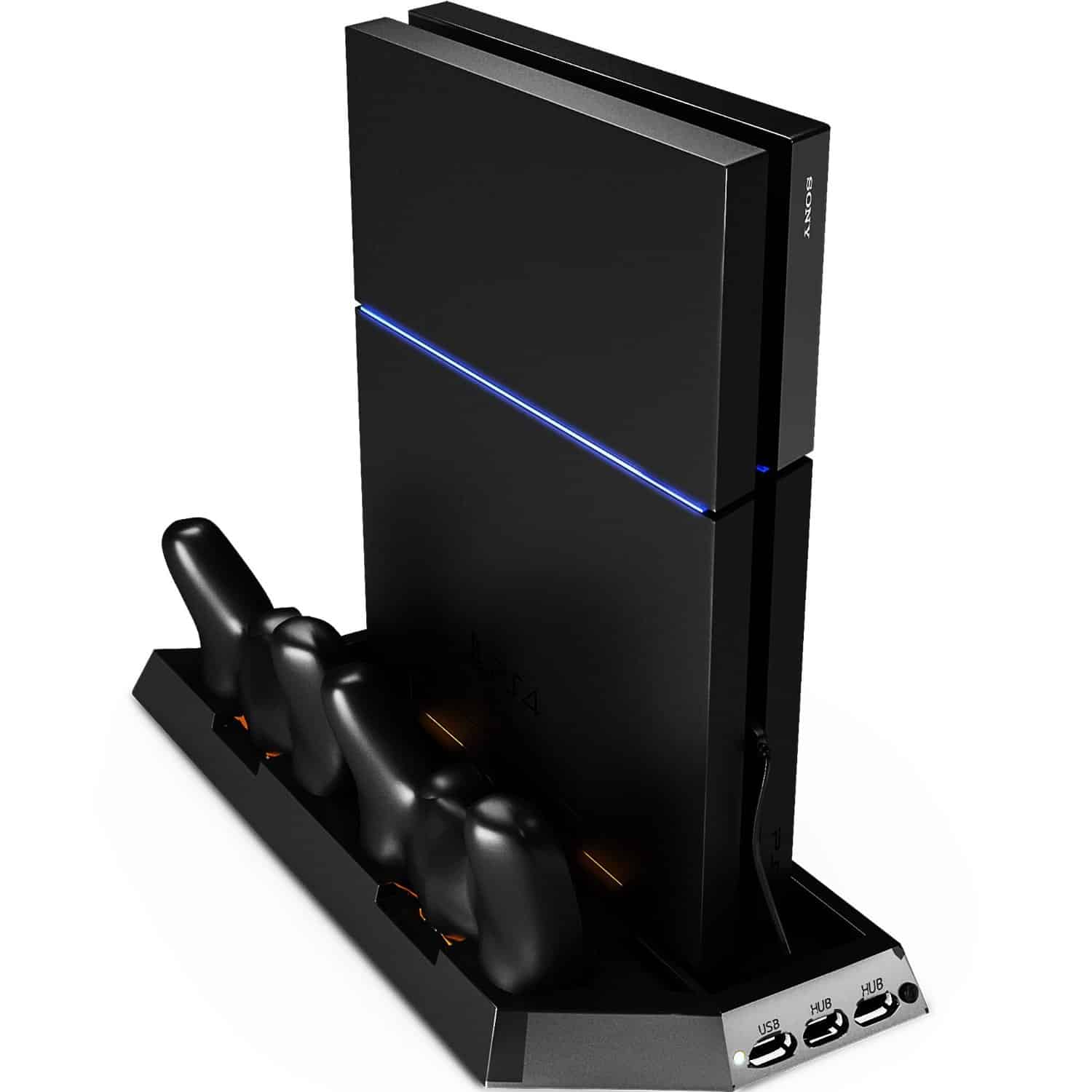 So you like the wireless charging idea for the controllers, but you also want the vertical stand. Something like the Nyko modular charging station wouldn't work too well, which is why the Ortz Vertical Stand With Cooling Fan for the PS4 is the perfect solution. It stands your PS4 up vertically to look sleek and save space, but it also has an integrated cooling fan to help keep the system running cool while playing games, and it has a built-in charge station where you can dock two DualShock 4 wireless controllers to charge. It also contains a USB hub with three open USB ports so you can plug in other devices if need be. 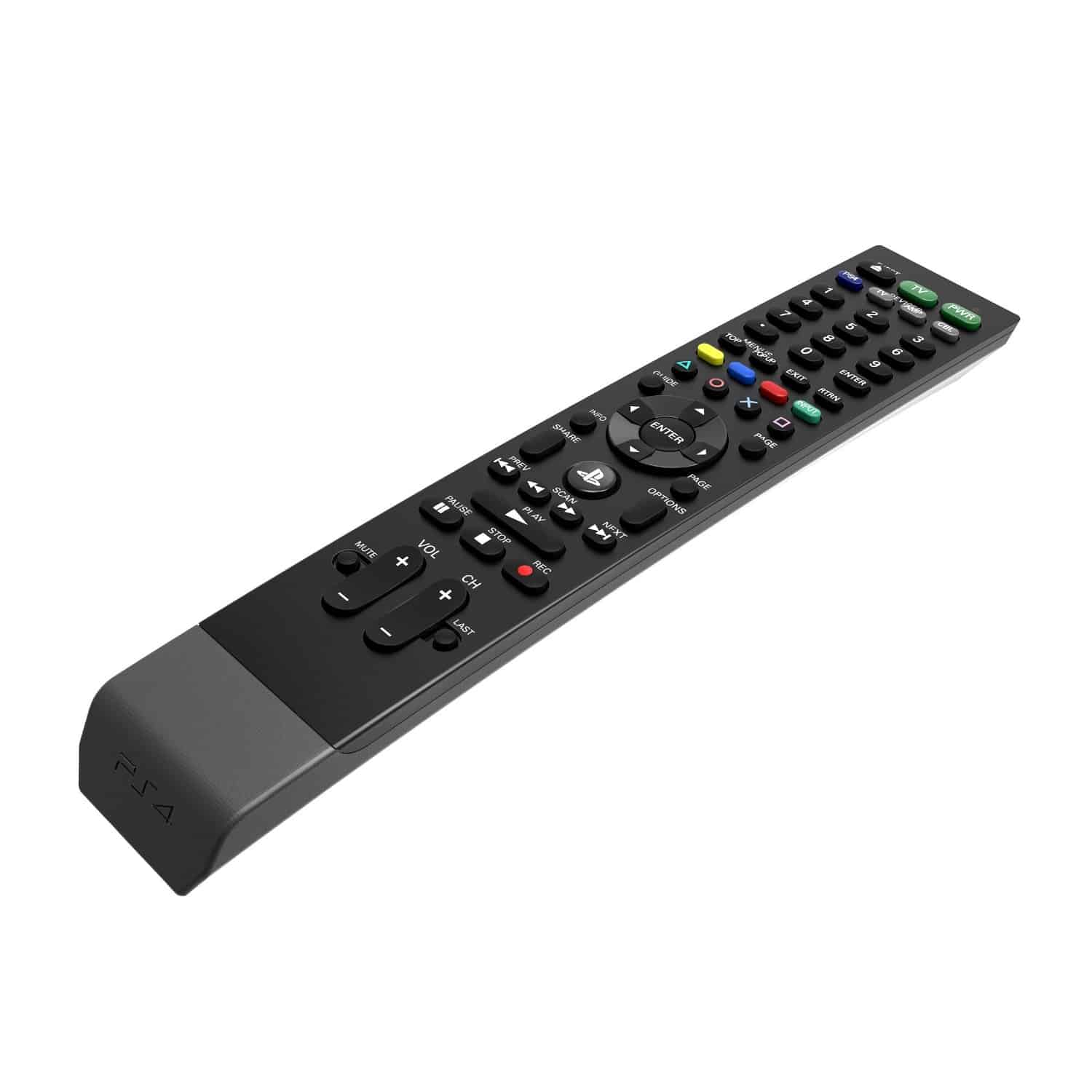 Sony has finally listened and launched a universal media remote for the PlayStation 4 console, which is packed full of controls for anything from disc movies inside the console to streaming videos from PS4 apps like Netflix and Hulu. The remote connects to the PS4 via Bluetooth, and in addition to being able to use it for controlling certain functions of your PS4 including powering it on and off, you can use it for controlling other devices as well like TV's and audio receivers. There are dedicated buttons for volume, pause/play, power, and dedicated buttons for the PS4 including the action buttons. If you're tired of using multiple remotes for your TV and for controlling your PS4 media, this will allow you to do it all with one unit.

Buy The Official Universal Media Remote For PS4 From Amazon 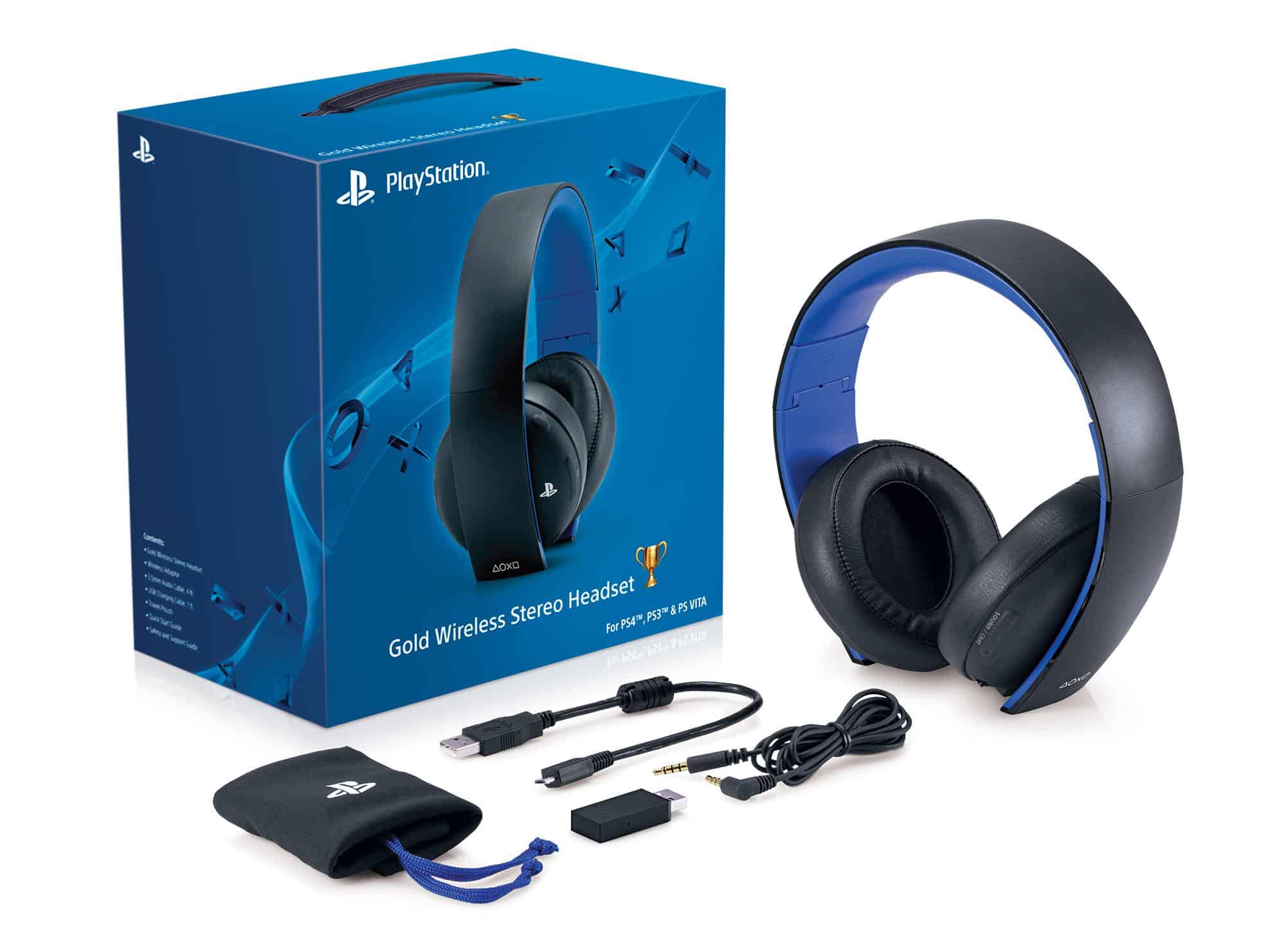 If you like playing games late into the night or just want the ability to hear anything and everything, you'll need a headset. The PlayStation Gold Wireless Stereo Headset allows you to block out ambient noise and focus on the game audio, while also allowing you to turn things up and play without having to worry about disturbing others. The headset features 7.1 virtual surround sound so everything feels much more immersive. You can also still use this headset for game chat with the noise canceling mic. Not only that, but the mic is hidden so there's nothing protruding out from it. While you can use it wirelessly with the PS4, it also comes with an included 3.5mm audio cable to plug it into other devices like the PS Vita, smartphones, etc. They fold up for easy storage, and if you like to customize you can swap out the face plates.