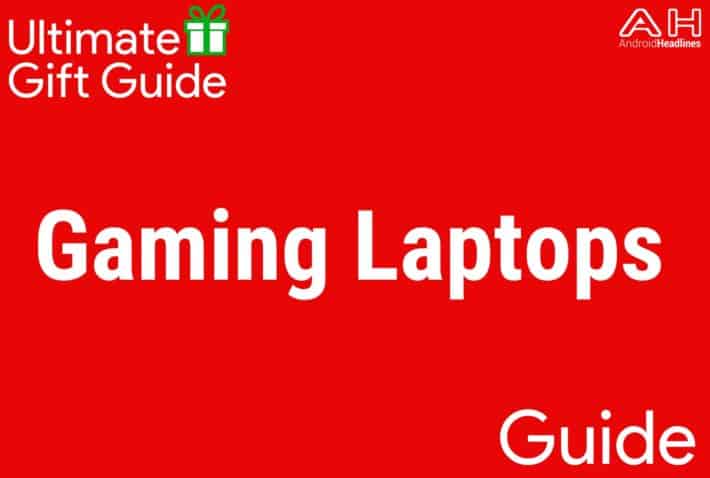 When it comes to PC gaming, there are lots of different factors to think about when looking for a machine. Depending on what you personally want, things like more power in the GPU and more RAM could be the most important. You may care more about having a gaming laptop with a slimmer design than the most RAM or most processor cores. Whatever the case may be, gaming laptops are a great option if you don't want to be limited to PC gaming just at home. With the holidays coming up It's a great time to start looking into a gaming laptop for the gamer in your life. If you need some help breaking down the options and making a choice, here's our list of top 10 gaming laptops to assist you finding the perfect machine. 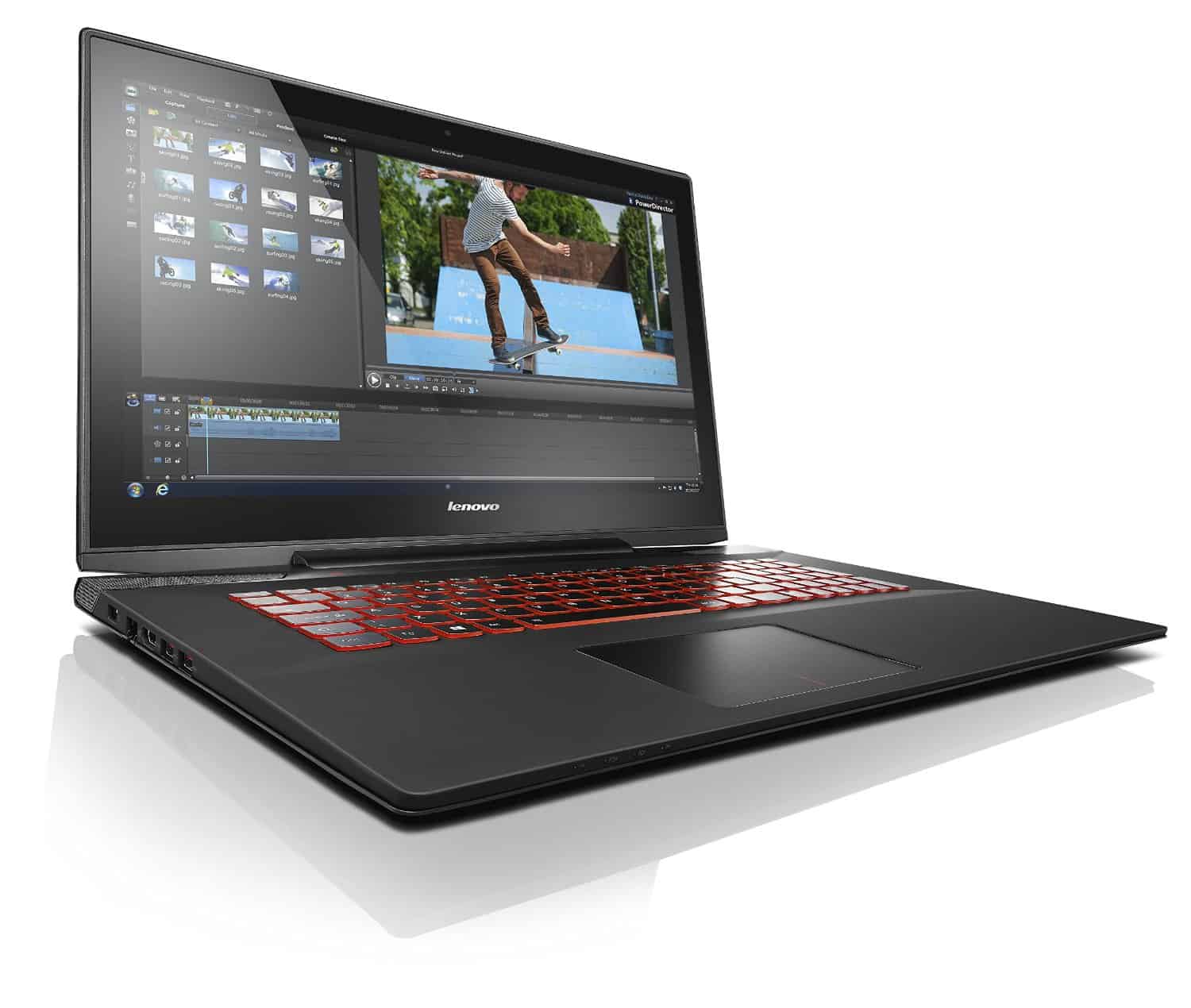 Lenovo may not typically be the first name gamers will think of when they're considering gaming laptops, but don't let that fool you into thinking Lenovo isn't capable of producing a decent quality and dedicated gaming machine. The Lenovo Y70 is perfect for someone who wants a good amount of gaming performance without breaking the bank, and the best part about the Y70 is that what it may lack in GPU it makes up for it in a much less expensive price and a fairly large hard drive. The Y70 is still plenty powerful though with the NVIDIA GTX-860M GPU with 2GB graphics, and an Intel Core i7 4710HQ CPU clocked at 2.5GHz. It also comes with 8GB of DDR3 RAM. When it comes to the screen size, it sports a 17.3-inch touchscreen display, and comes with a 1TB 5400rpm hard drive along with an 8GB solid state drive. It's also got an integrated 720p HD webcam, JBL speakers with Dolby advanced audio for great quality sound while gaming, a backlit keyboard for those late gaming sessions and it comes running Windows 8.1, weighing about 7.5 lbs. 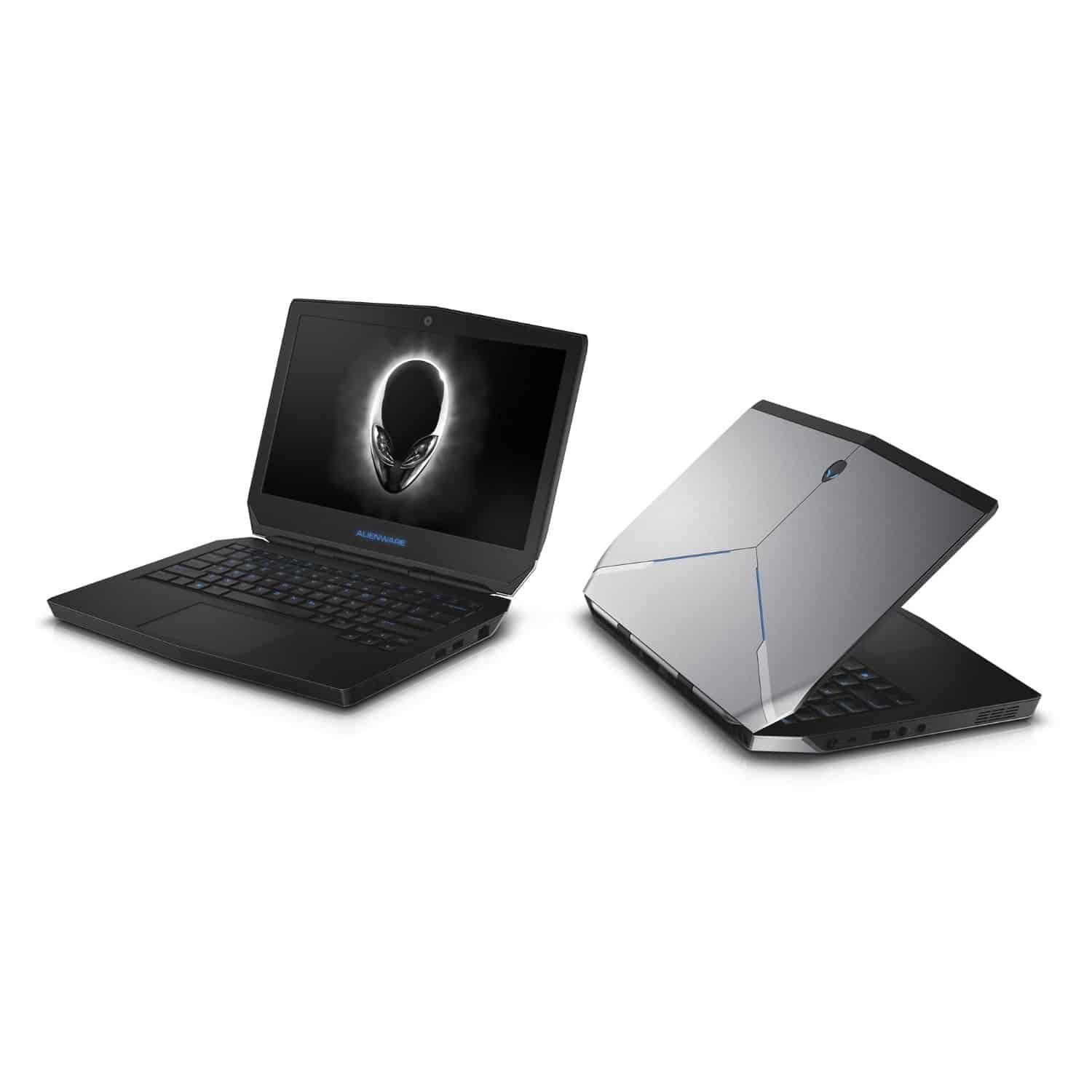 If you're a gamer or you're looking for someone who is a gamer, you and/or they are probably familiar with Alienware. They've been well-known in the gaming PC market for quite some time and are a favorite among PC gamers. The Alienware 13 features a 13-inch display and is powered by an Intel Core i5 4210U CPU, an NVIDIA GTX-860M GPU with 2GB DDR5 graphics, 8GB of DDR3 RAM, a 1TB 5400rpm SATA hard drive, and comes running Windows 8.1 which is upgradeable to Windows 10 now that it's out, as is every other laptop on this list. It weighs about 4.5 lbs. making it quite a bit lighter than the previous Lenovo Y70 as well as most other serious gaming laptops, so if you want something easy to carry around this is a good choice. If you're also going to be gaming at home quite a bit the Alienware 13 can also connect up to an optional Alienware graphics amplifier to boost your graphics performance. The amplifier itself will need graphics cards inserted into it. 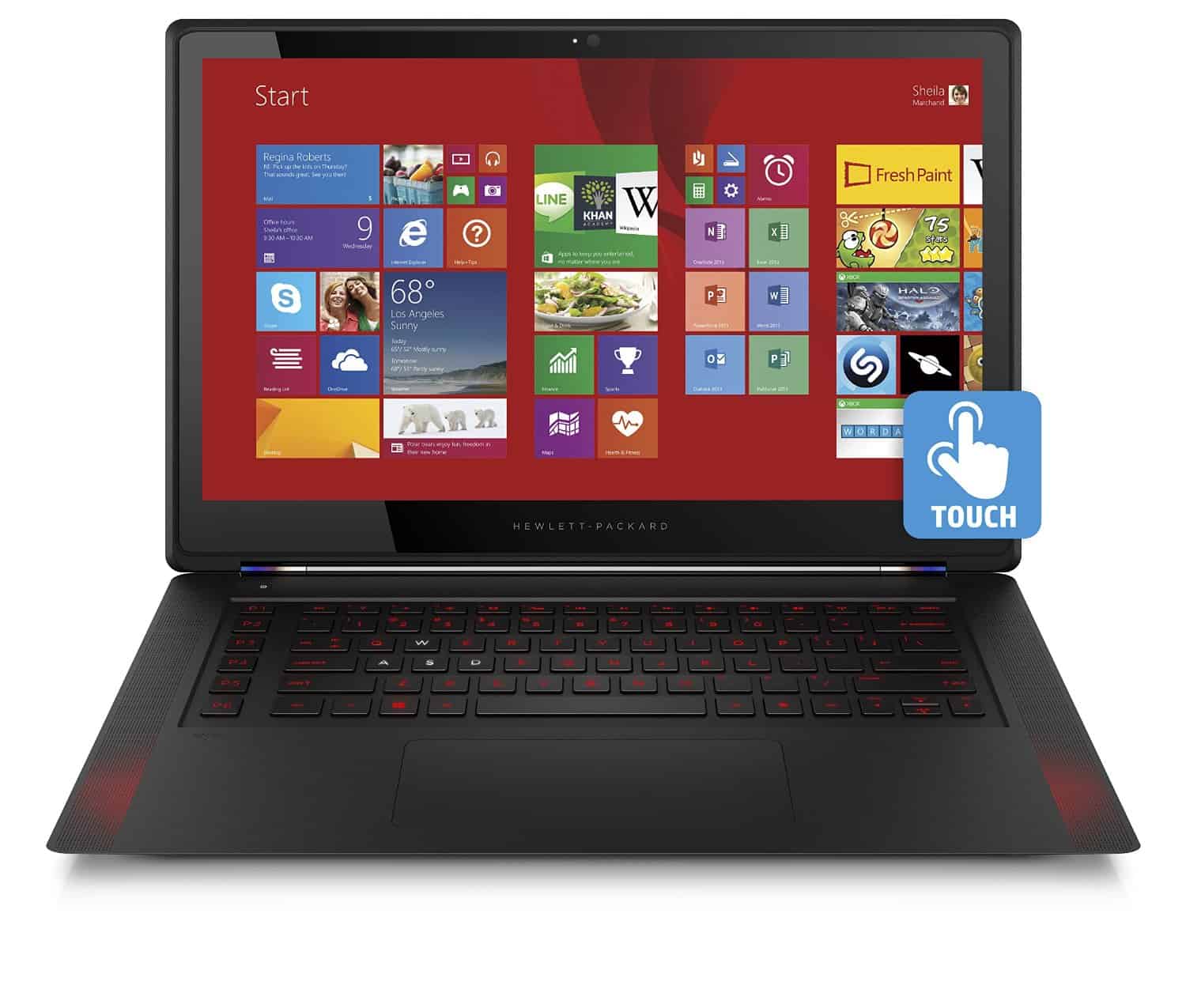 HP is generally not a gaming PC company just like Lenovo, but the new HP Omen laptop turns that notion on its head. It comes with a 15.6-inch touchscreen display, and is powered by an Intel Core i74720HQ CPU clocked at 2.6GHz. It comes with a more powerful GPU than the previous two laptops as well with the NVIDIA GeForce GTX-960M, 8GB of DDR3L SDRAM, and a 256GB Solid State Drive. It features a backlit keyboard so you can game late into the night and it comes running Windows 8.1. The HP Omen also features an extremely thin design and only weighs about 4.7 lbs. making it easily portable. It also features 6 macro keys on the left side of the keyboard for those that really take their gaming seriously and want quick access to certain in-game functions. 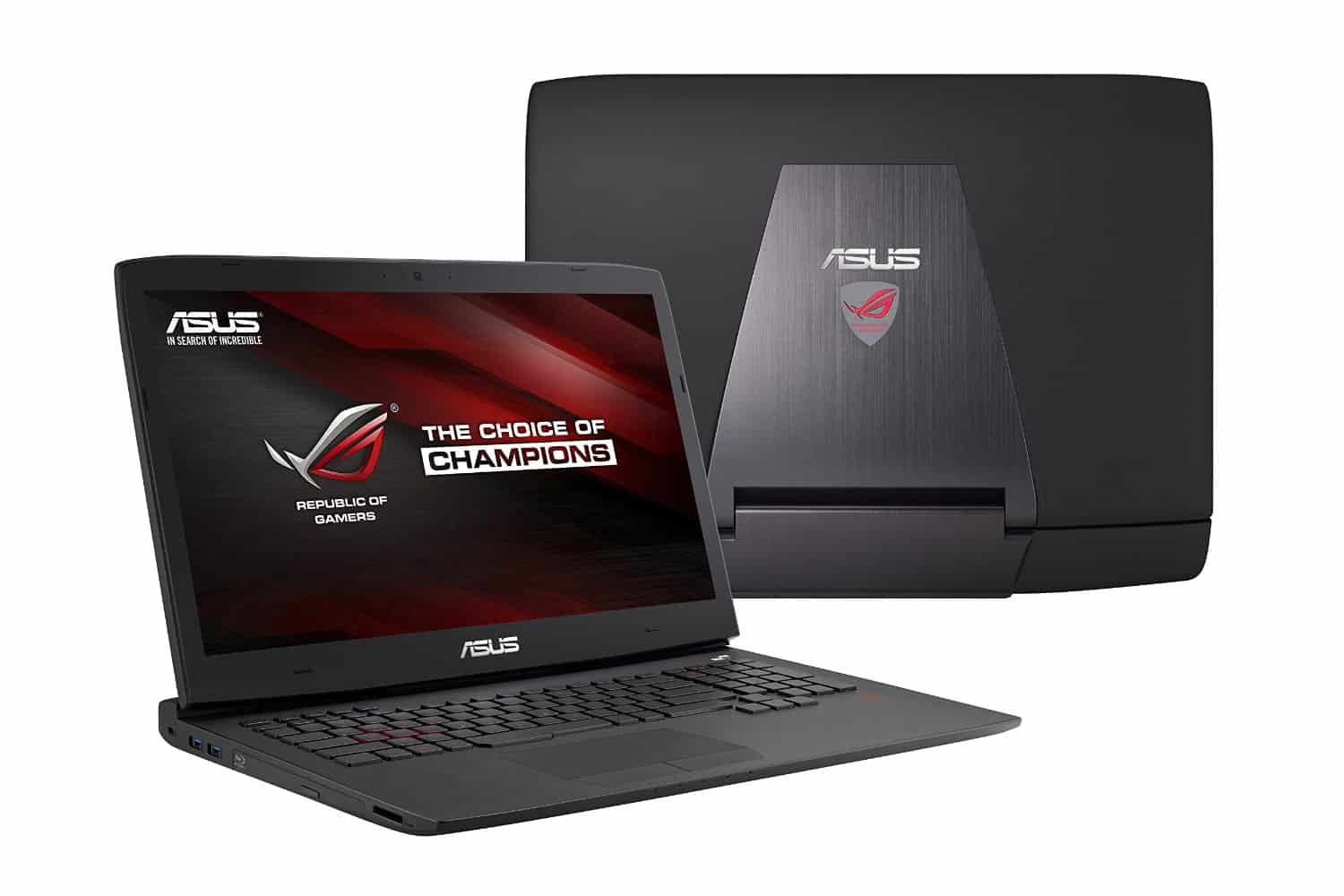 One of the most prominent names in PC gaming is ASUS and that's all due to their Republic of Gamers lineup of laptops. One of their latest is the ASUS ROG G751JY, which sports a 17.6-inch display with GSync technology for less stutter and screen tearing during gaming sessions. It's powered by an Intel Core i74720HQ CPU turbo-clocked to 3.6GHz, and one of NVIDIA's latest graphics cards; the GeForce GTX-980M GPU with 4GBV of DDR5 graphics with GSync. It also comes with a whopping 24GB of RAM, a 1TB 7200rpm hard drive and a 256GB solid state drive. The backlit keyboard makes it easy to game in the dark so you never miss hitting the right key, and it also features programmable macro keys, and dedicated keys for opening up Steam and game recording. It features dual-band 802.11 AC WiFi for super fast connection support, and it supports gigabit ethernet. It also has 4 USB 3.0 ports, 1 HDMI out port, 1 thunderbolt port, 1 VGA 15 pin port, 1 SPDIF port and ports for both headphone out and mic in. It comes running Windows 8.1 and weighs about 8.4 lbs. 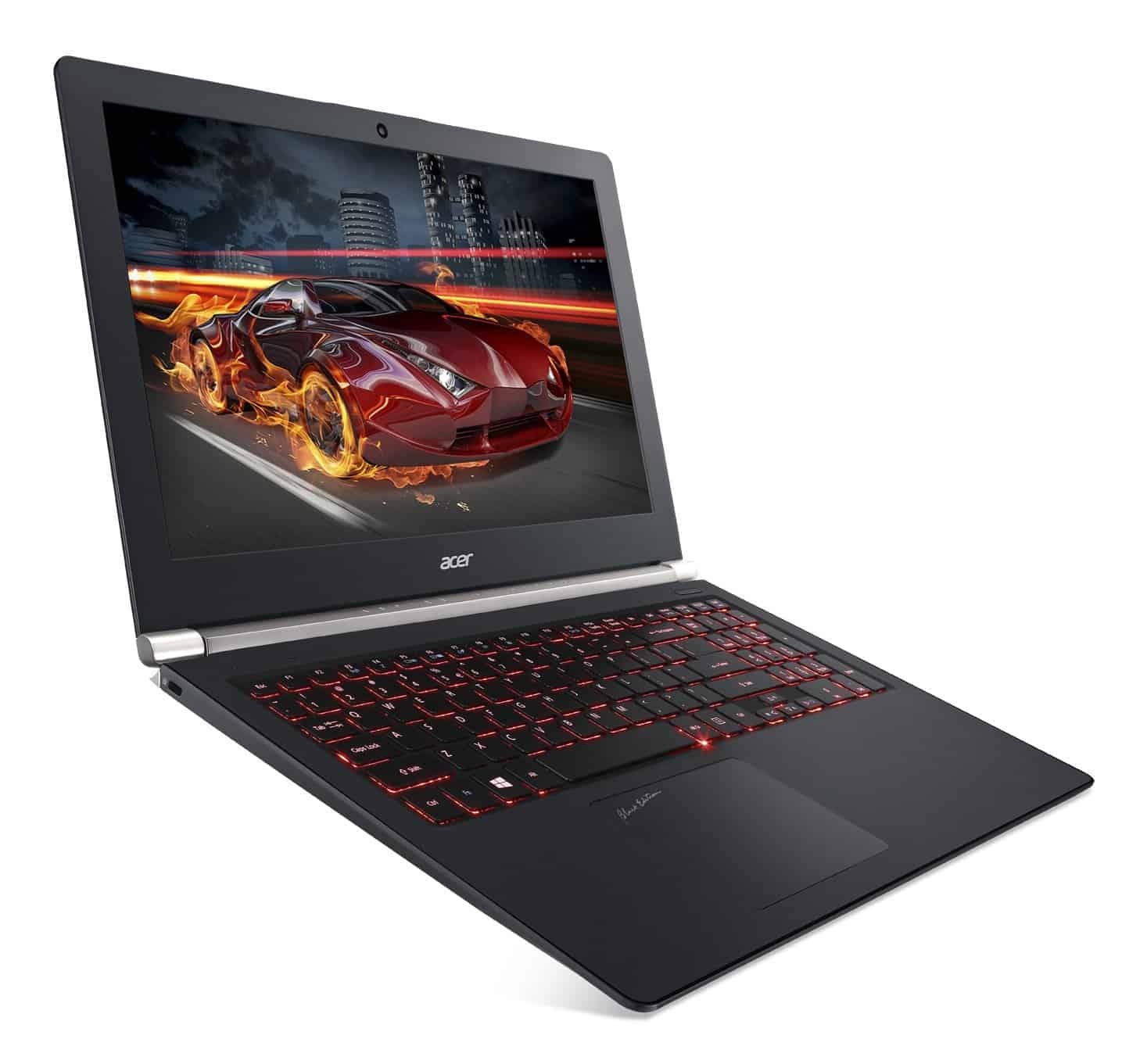 Acer comes in hard hitting and fast with their Aspire V15 Nitro Black Edition, offering up decent quality specifications and hardware in a stylish design for less money than some of the competition. This machine sports a 15.6-inch screen, and is powered by an Intel Core i74720HQ CPU clocked at 2.6GHz and 16GB of DDR3 RAM. It also carries NVIDIA's GeForce GTX-960M GPU, and has a 1TB 5400rpm hard drive and a 256GB solid state drive. It also has backlit keys like most of the laptops on this list, and has four speakers with Dolby sound for an awesome and immersive audio experience with your games. It weighs about 5.3 lbs. and is running Windows 8.1. 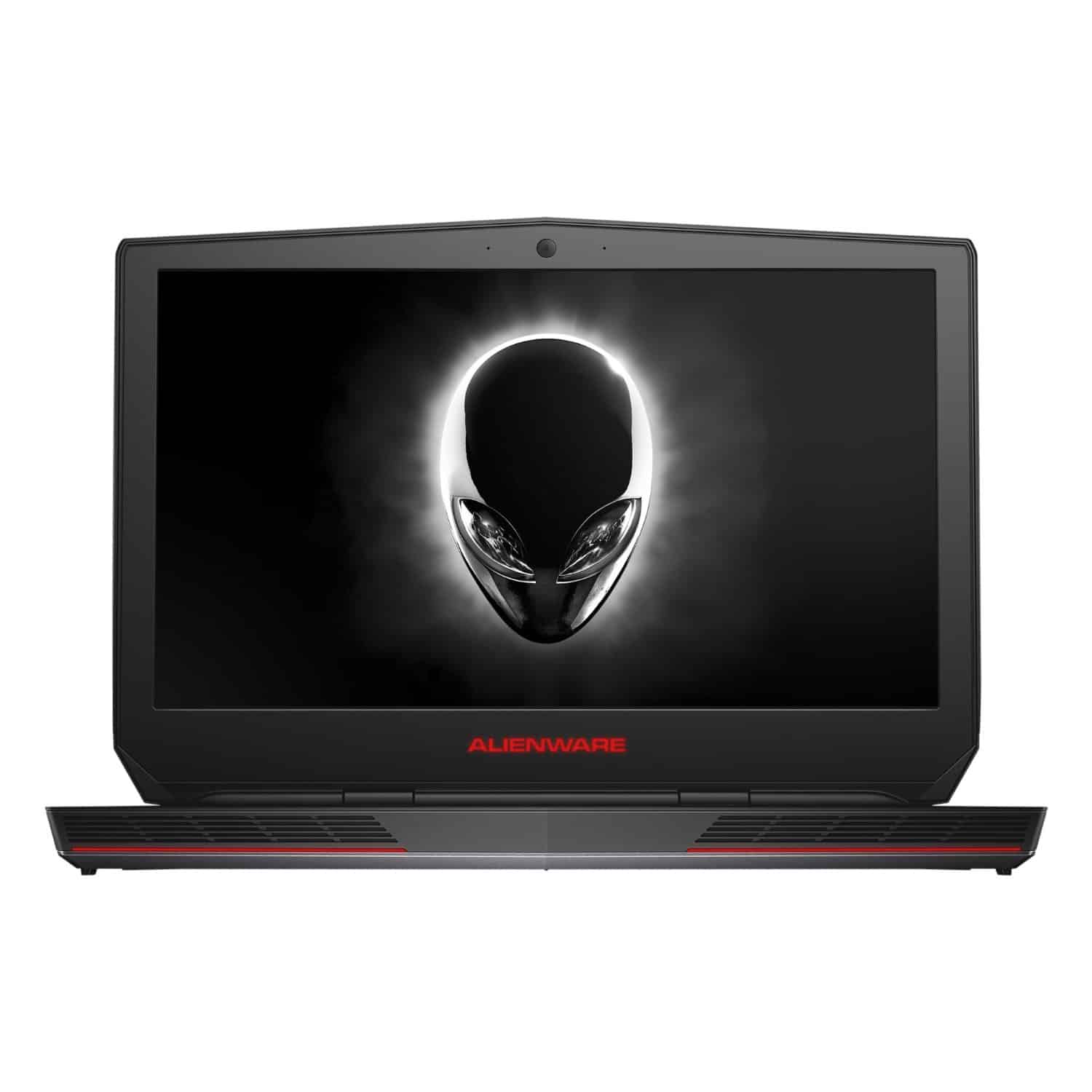 It shouldn't surprise that Alienware makes it on this list twice as they're one of the most solid PC gaming brands. The 15 comes packing a Full HD 15.6-inch display and is powered by the Intel Core i7 4710HQ CPU clocked at 2.5GHz, with 16GB of DDR3L SDRAM and an NVIDIA GeForce GTX-970M GPU with 3GB of GDDR5 graphics. It carries 1TB of hard drive space and a 128GB Solid State Drive so there's plenty of room for your games. It also features a backlit keyboard and comes with Klipsch audio and Creative soundblaster technology for excellent sound. It comes running Windows 8 but is upgradeable to Windows 10 and weighs about 7.4 lbs. The Alienware 15 is also compatible with the Alienware Graphics Amplifier so you can boost your gaming graphics while playing at home. 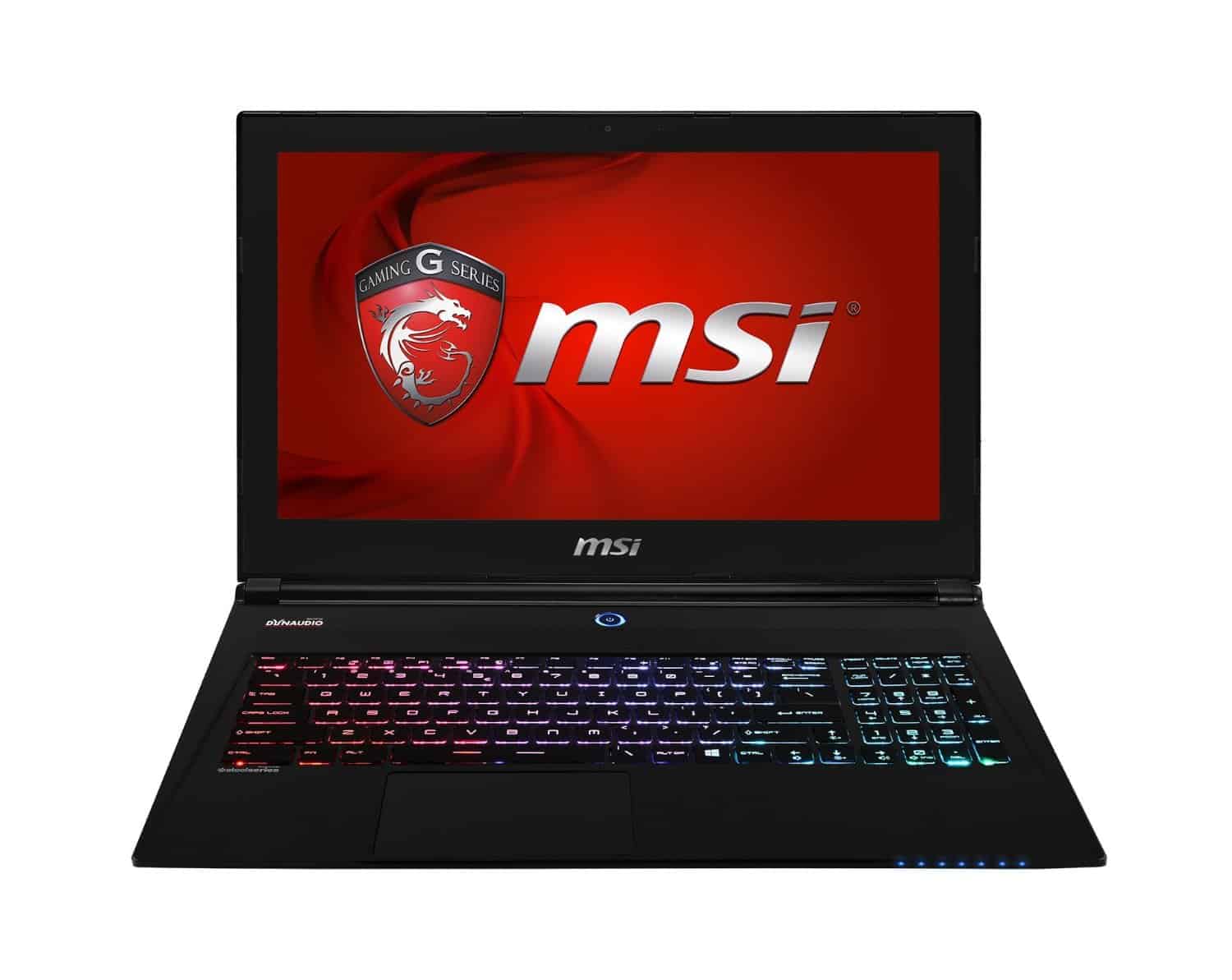 MSI is yet another brand which is known for some stellar gaming PC's and laptops. The Ghost Pro-606 model is one of their best to date and offers some powerful specifications in one slick looking package. It features a 15.6-inch display, and is powered by the Intel Core i7-5700HQ CPU clocked at 2.7GHz which can also be turbo-clocked to 3.5GHz. Also on the inside is an NVIDIA GeForce GTX-970M GPU with 3GB graphics RAM, 16GB of DDR3L SDRAM, and a 1024GB 7200rpm hard drive with an additional 128GB Solid State Drive. Th Ghost Pro weighs about 4.2 lbs making one of the lightest gaming laptops on the market and it comes running Windows 8 with a free upgrade to Windows 10. Four speakers with Dynaudio technology put out some excellent sound for games, and it features a backlit keyboard with anti-ghost keys for precision and performance while allowing gaming in darker situations without the worry of missing the keys you need. 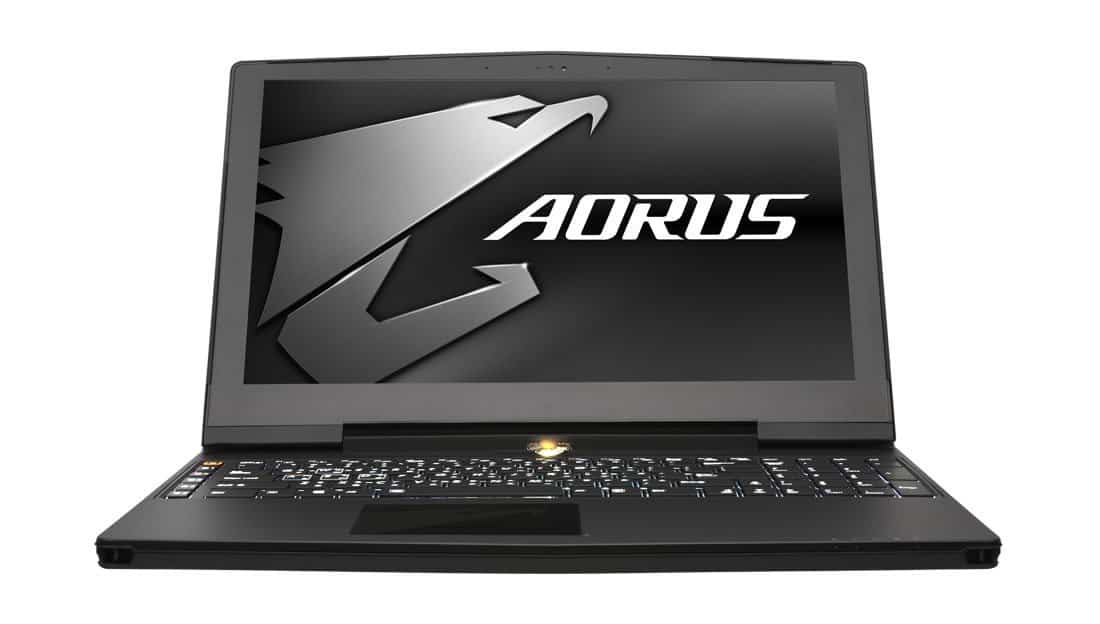 AORUS isn't a brand name for gaming PC's you're going to see plastered everywhere, but don't let that deter you from checking out some of what they have to offer. In particular their Aorus X5-CF1. It comes equipped with a 15.6-inch WQHD IPS display (3K resolution), and is powered by an Intel Core i7-5700 CPU, NVIDIA GeForce GTX 965M SLI GDDR5, and 16GB of DDR3L SDRAM. It comes running Windows 8.1, and also sports a nice, thin form factor at 22.9mm while weighing 5.5 lbs. Thanks to the NVIDIA G-SYNC technology, everything is also set up to be tear-free so gaming will be smooth, fast, and enjoyable. As for storage, it comes with 1024GB 7200rpm hard drive as well as a 512GB  Solid State drive. 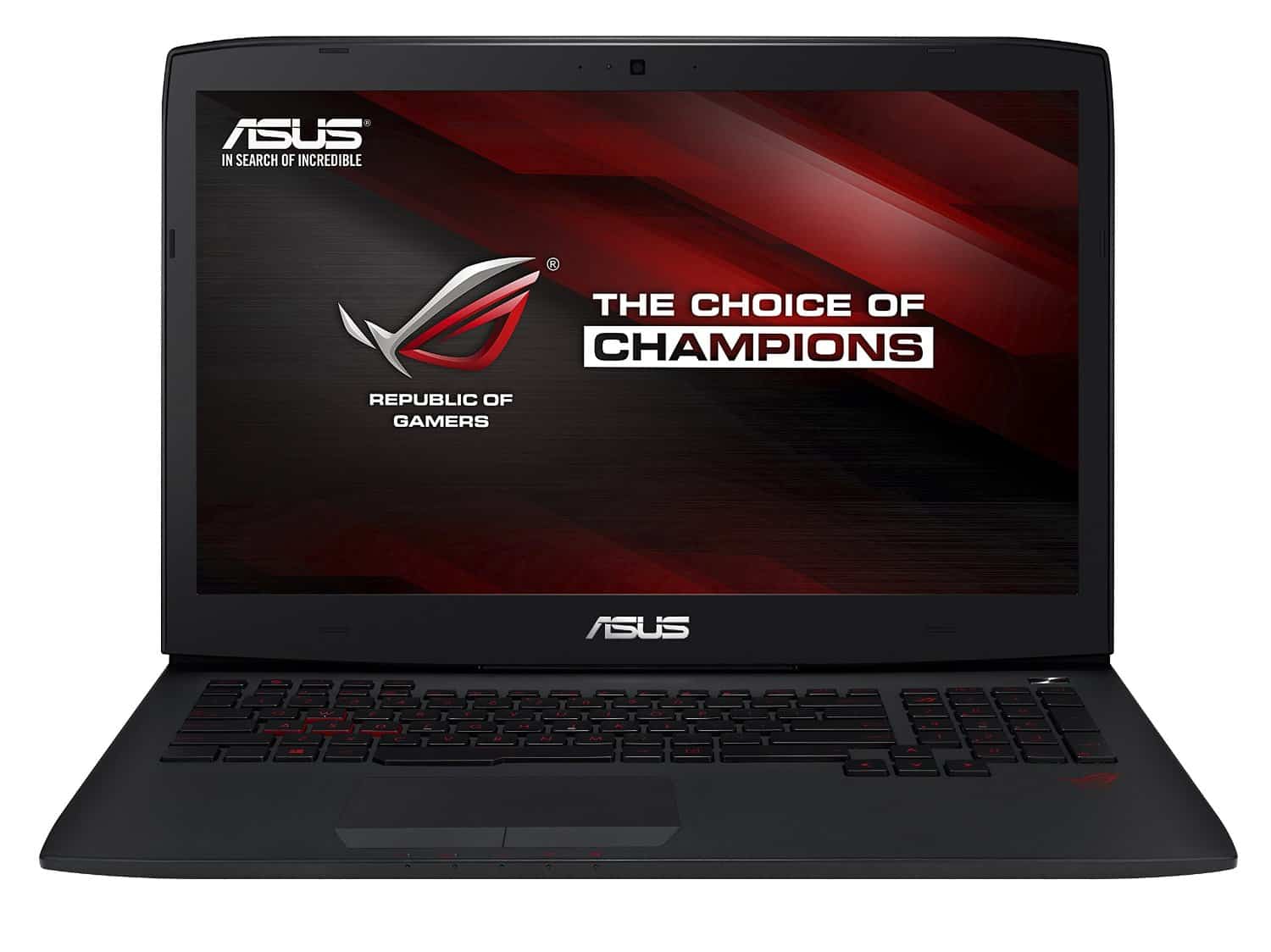 Time and time again ASUS has proven themselves to be a top contender in the PC gaming market, and machines like this G series laptop are exactly why. It's a bump up from the earlier model G751 on this list, and comes packing a 17.3-inch Full HD IPS display with NVIDIA's G-SYNC technology to provide tear-free gaming. It's powered by an Intel Core i74870HQ clocked at 2.5GHz but can be turbo-clocked up to 3.7GHz if needed. It's also got the NVIDIA GeForce GTX980M 4G GDDR5 Graphics with G-SYNC, and comes with 32GB of RAM, also a step up from the 24GB of the other model. It has a 1TB 7200rpm hard drive and a 512GB Solid State Drive. The short version, this will play all games at the highest settings with ease. It comes running Windows 8 and weighs about 8.4 lbs. 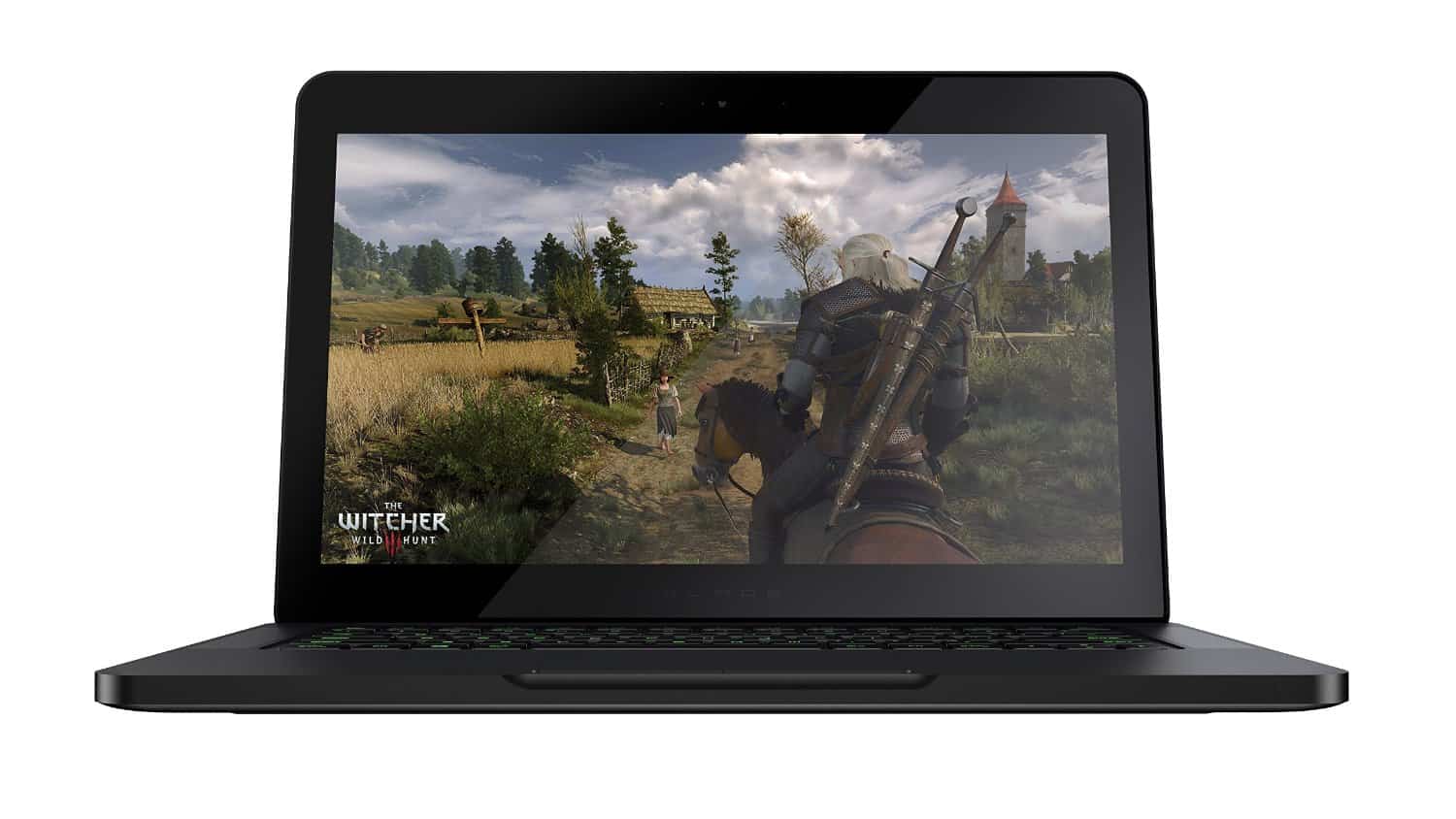 The Razer Blade 2015 is easily Razer's best gaming laptop to date, and it's packed full of hardware to take your gaming to the next level. It features a 14-inch display, this particular version is the QHD+ touchscreen model, and although it doesn't have the most storage sitting at only 256GB, it's a trade off for the power and performance you're going to get that's been neatly packed into what is likely the thinnest gaming laptop around. Also inside the aluminum frame which measures just 0.7inches thin, is an NVIDIA GeForce GTX 970M GPU and an Intel Core i74720HQ CPUclocked at 2.6GHz. It also comes with 16GB of DDR3L SDRAMand the 256GB Solid State Drive.