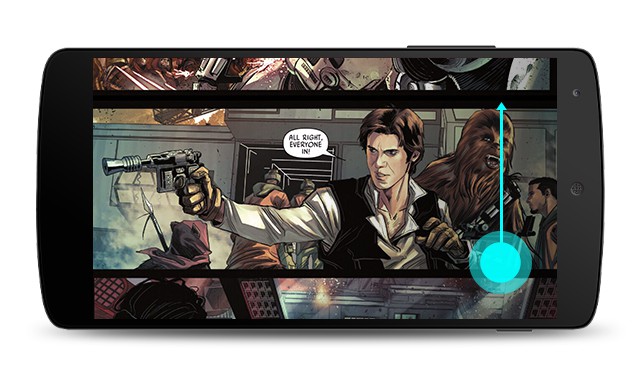 Graphic novels, or comic books, are as popular as ever now that they have taken to the digital screen. Today, Google has announced an update to the Google Play Books application with comic books very much at the heart of the improvements. Google's blog site explains that the advantage of having a sharp, color screen on us most of the time together with the new Google Play Books application means that we can have instant access to "read any comic whenever and wherever you are." The main change is to the comic book reading interface, which now includes what Google are calling a new vertical scrolling experience, designed for reading comic books with the device in landscape mode. The interface change is because comic books work best when following the story, appreciating the art and dialogue, but at a pace set by the user. This means occasionally scrolling back to a previous image, which is easily accomplished with quick, vertical swipes. Google Play Books' Lead Product Manager, Greg Hartrell, explained that the changes to the interface followed "good old-fashioned usability studies."

In addition to the user interface changes, Google has improved their comic book offering on the Play Store with a new section containing "a bunch of beautifully curated series pages on the Google Play Store that organize volumes, issues and other editions of the top comic series." The Play Store section is designed to produce personal recommendations for similar comic books to those stories already read. The Google Play Store now offers comic from the major publishers, including DC Comics, Marvel, Image, IDW and Dark Horse. Collections include The Walking Dead, Justice League, Deadpool and Mortal Kombat series and over the next week Google will be releasing several free comics from The X-Files, Lazarus, Jem and the Holograms plus more.

Google's improvements to the comic book aspect of Play Books follow studying what customers buy; comics are a very popular destination in the Play Store and comic book readers turn twice as many pages as other customers. This information is not so surprising; comic books are difficult to put down once you start! Google does not release statistics explaining what the most popular categories are in the Play Book Store, but Greg notes that comics easily rank among the most popular of categories. The application update is being released today and will roll out to all customers over the next few days.