Skip to content
Trusted By Millions
Independent, Expert Android News You Can Trust, Since 2010
Publishing More Android Than Anyone Else
21
Today
21
This Week
642
This Month
5755
This Year
115756
All Time As some of you might know, China is rather closed off as far as internet content goes. Google services, for example, are for the most part blocked in that Asian country, and if you travel there you need to prepare yourself for it. Google has been trying to fix that for a while now, and it’s just a matter of time before Google Play Store becomes live in China again (the company left it 2010). Now, the Mountain View giant needs to keep in mind that this is definitely not going to be an easy task, there are a number of obstacles they’ll need to cross, including a number of China-based app stores from a range of other companies.

So, why does Google wants to do business in China then? Well, China is currently the number one smartphone market in the world, and it’s the biggest untapped source of income at the moment. Android smartphones are highly popular in China, but unfortunately, the vast majority of them ship without Google Play Services installed. According to TalkingData’s Monthly Active User (MAU) Penetration Rate for September 2015, Google will definitely have a hard time penetrating the Chinese market. If you take a look at the image below this article, you’ll get to see that the Google Play Store is a third-party app store which some users sideload on their phones. Google’s app store occupies 10th place in TalkingData’s list, which is not good, of course.

18.34% users in China use Tencent’s Myapp store, which is currently the first placed in TalkingData’s list. Myapp stores is followed by 360 Mobile Assistant, which is a close second with 18.04%. These two stores are actually marked as third-party app stores, while Xiaomi’s MIUI app store is placed third, and it comes pre-installed on the company’s devices. As far as monthly active user penetration rate is concerned, MIUI app stores currently accounts for 12.55% of users, and is followed by Baidu Mobile Assistant (12.47%). If you’d like to take a look at the whole list, check out the image below this article. This list is rather interesting, and it reveals that there’a lot of competition in China at the moment, there are app stores here most of you probably have never heard of. “It’s still quite challenging for them to reach a real success in a short period of time,” said Ibrahim Dai, Head of Global Business Development at TalkingData. It remains to be seen what will happen when Google returns to China, so stay tuned. 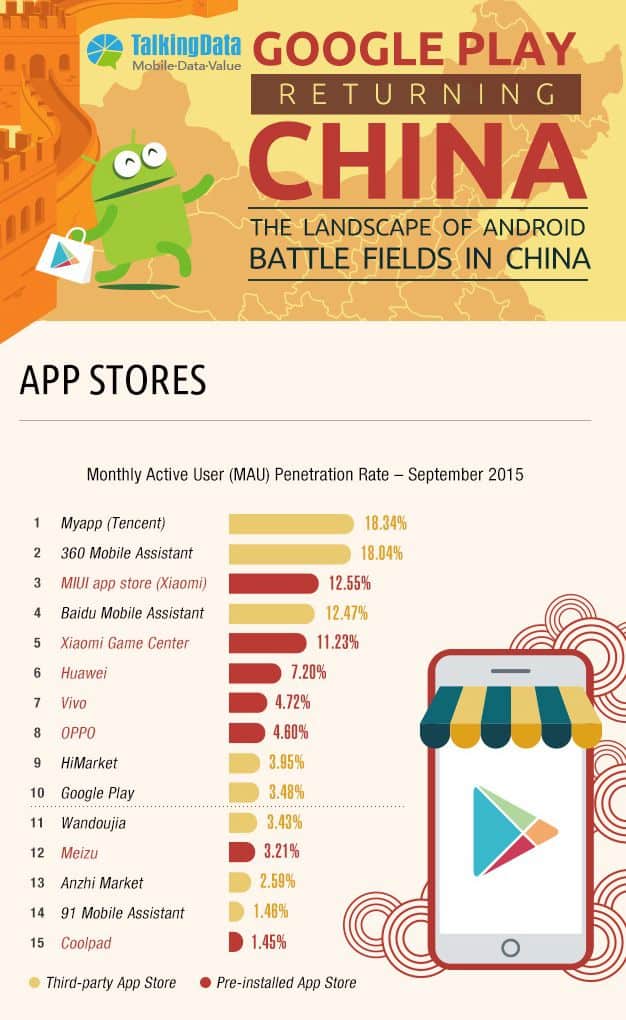