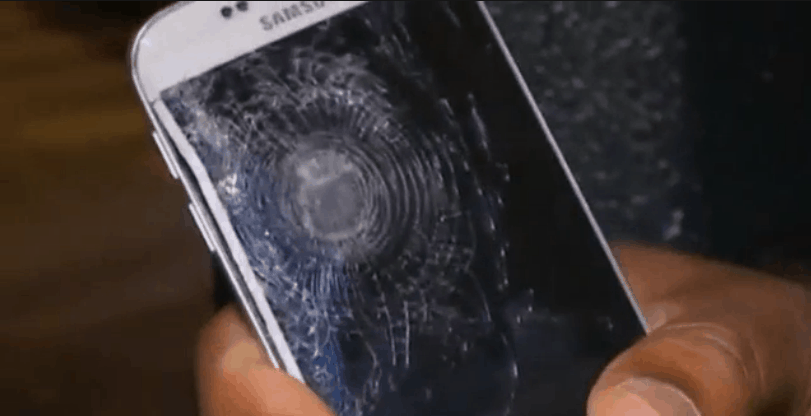 In the aftermath of the mindless tragedy that unfolded Friday in the French capital of Paris, the media is replete with stories of bravery and courage in the face of danger. While dozens of innocent people lost their lives and thousands lost their loved ones, some people it turns out, had lady luck smiling on them and managed to escape without a scratch on them even after being directly in the line of fire. According to an interview on VGTV, a man identified only as Sylvester apparently was saved by the skin of his teeth when a bomb splinter got lodged in his Samsung Galaxy S6 Edge smartphone thereby saving him from critical injury and maybe worse.

As per the interview (which is in French), the gentleman was apparently outside the Stade de France stadium, which was hosting a game of soccer between the national teams from France and Germany. The French President, Mr. Francois Hollande was just one of the tens of thousands of attendees when the carnage started. The stadium was one of the multiple venues at which suspected terrorists unleashed their violence, with bombs and automatic firearms being the weapons of choice for the attackers. As it turns out, it was a splinter from one of these bombs that nearly cleaned up Sylvester, but fortunately for him and his family, his smartphone saved the day on this occasion, and he managed to escape with minor injuries to his stomach.

Unfortunately for residents of Paris and for peace-loving citizenry worldwide, the Stade de France wasn't the only place to come under siege on this day either. Simultaneous attacks were carried out at the Bataclan concert hall as well, where US rock band 'Eagles of Death Metal' were playing. People were also shot dead at restaurants and bars at five other locations in Paris, according to the country's premier news agency, Agence France Presse. The world of course has changed beyond recognition since the most widely reported terror attacks in New York City back in September, 2011. While traditional media was pretty much the only way to get news across back in the day, it is the social media that today gets the job done faster than anybody else especially with net connected devices in everybody pockets – otherwise known as smartphones.