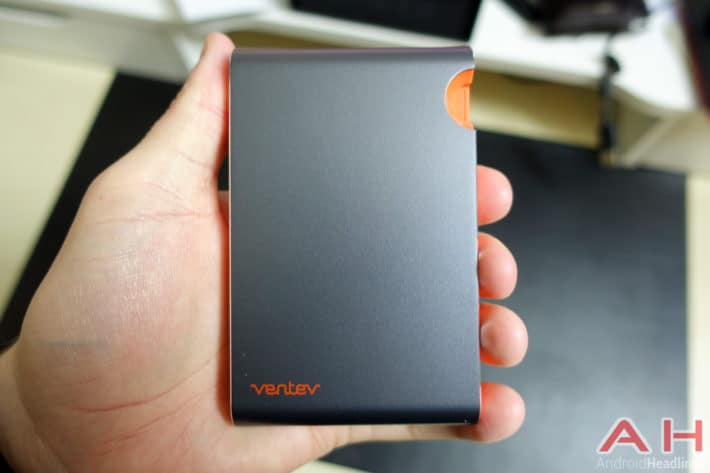 When it comes to keeping our devices charged up, one accessory we all use is a battery pack or a power bank. Many of us use a larger power bank, maybe a 15,000mAh capacity, or even a 26,800mAh capacity battery pack (which I take on most trips these days) to keep our devices charged up during the day. As we all know, battery life isn't the best. Some devices have some great battery life, but even under heavy use, they can't always make it through the entire day, unfortunately, without needing a jump start to get some extra juice. Ventev has a brand new power bank here that we are taking a look at today, it's the Powercell 6000c, which retails for $69.99 right now, and as you can likely tell by the name, it does have a 6000mAh capacity along with one USB port.

One of the best features of the Ventev Powercell 6000c, is that it is small enough to fit in your pocket, but not too small to where it can't charge your device from 0%, especially with smartphones getting larger and larger capacity batteries. I've been able to put the Powercell 6000c in one pocket and my smartphone in the other and charge it up when needed, without having to carry around a bag. That's a pretty big convenience, and something that many of us will love. Continuing the talk about convenience, there's another feature that is really helpful here, and that's the embedded micro USB cable. On the back side, there is an orange micro USB cable that is embedded, meaning you don't need to carry a cable around with you to charge up your smartphone. Definitely convenient. Although if you have a device with a USB Type-C charger, like the Nexus 5X, Nexus 6P, OnePlus 2, ZUK Z1 or Meizu Pro 5, there is a regular sized USB port on the opposite side that can be used for a USB Type-A to Type-C cable and charge up your smartphone. 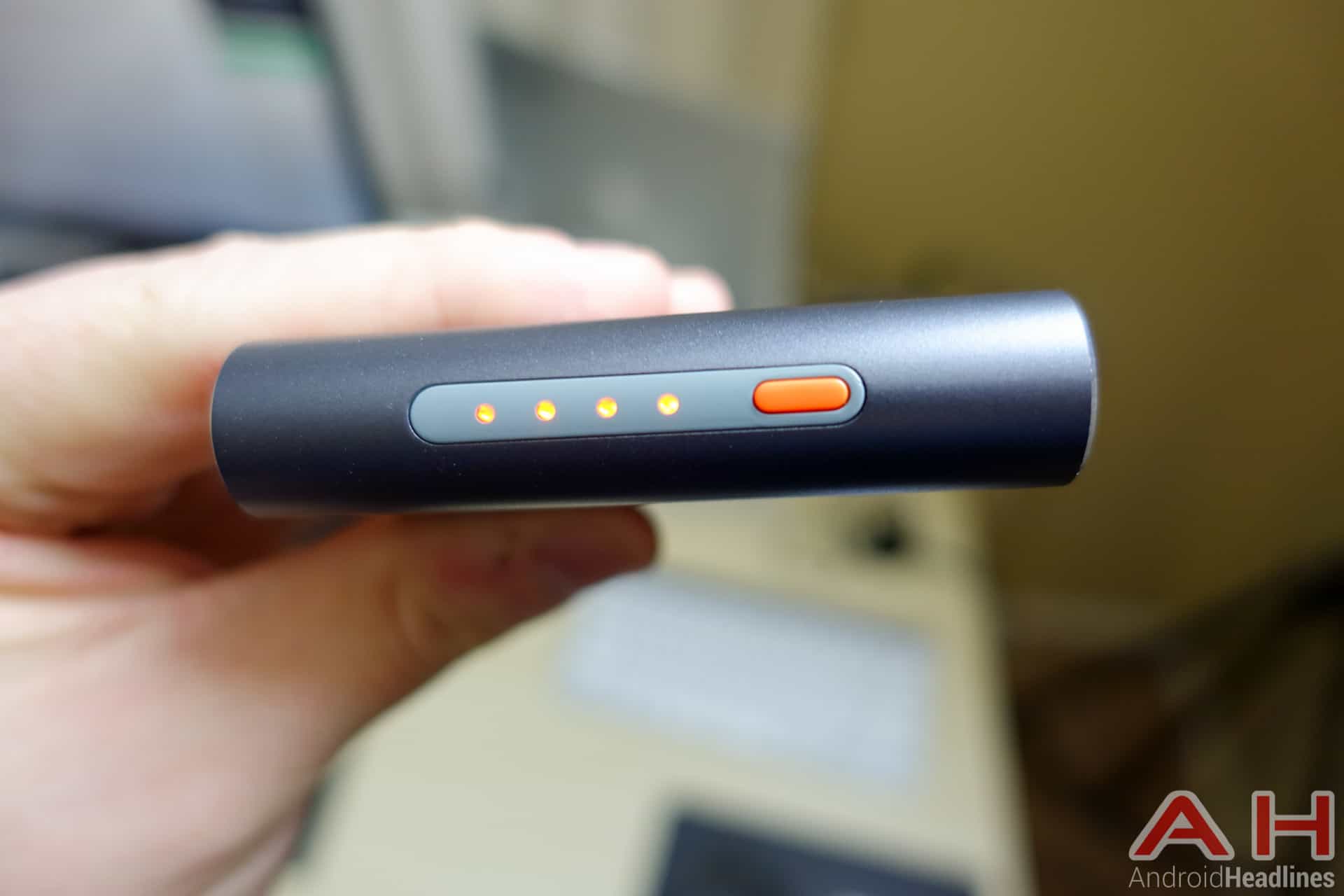 The left side of the Powercell 6000c there is a power button, allowing you to turn on the power bank when you plug in your smartphone. Additionally there are four LED lights. These represent how much juice is left inside the power bank. So you'll easily know how much juice is left. Simple math tells us that each light represents roughly 25% of the battery capacity here. Standby seems to be pretty good, and better than some of the other power banks around. The last thing you'd want is for your power bank to be out of juice because it was in standby too long, and can't charge up your smartphone in an emergency. Speaking of charging. The embedded micro USB connector outputs at 2.1A, while the standard USB Type-A does 1A. It's a bit unfortunate that they don't both do 2.1A or even 2.4A, but the USB Type-A port would be perfect for charging a tablet. Charging times are a bit slower than with a normal Quick Charge 2.0 charger or even a 2.4A port, but it can still charge the Moto X Pure Edition in about 2-3 hours. Not quite the Turbo speed of right at 2 hours. But still good enough. There's enough juice inside to charge your smartphone twice, but that does depend on the smartphone you have, and what percentage it is at when you plug it in. Charging up the Powercell 6000c takes around 3-4 hours. Now this is about twice the size of the battery in the Moto X Pure Edition, or the Nexus 6P, and many other smartphones out these days, so that's not a huge surprise. Just charge it overnight and you should be good to go.

What has really surprised me about the Powercell 6000c, is actually the build quality. So it's an aluminum body, with the sides where the ports are, being plastic (really digging the orange actually). The power bank feels really solid in the hand. Of course, this time of year, it feels really cold, since it is made of aluminum. As far as size goes, it's a tad thicker than the Moto X Pure Edition, and is also shorter, obviously. It is about the same width, making it easy to hold it behind the Moto X Pure Edition, and still use it while it's charging. Something we all do at some point. Given the size it should fit in your pocket, purse or bag without any issues. It's also pretty lightweight. Not weighing much more than the Moto X Pure Edition, at least in my opinion. I do wish the embedded micro USB cable was a bit longer, but that's always a complaint about embedded cables, to be honest. 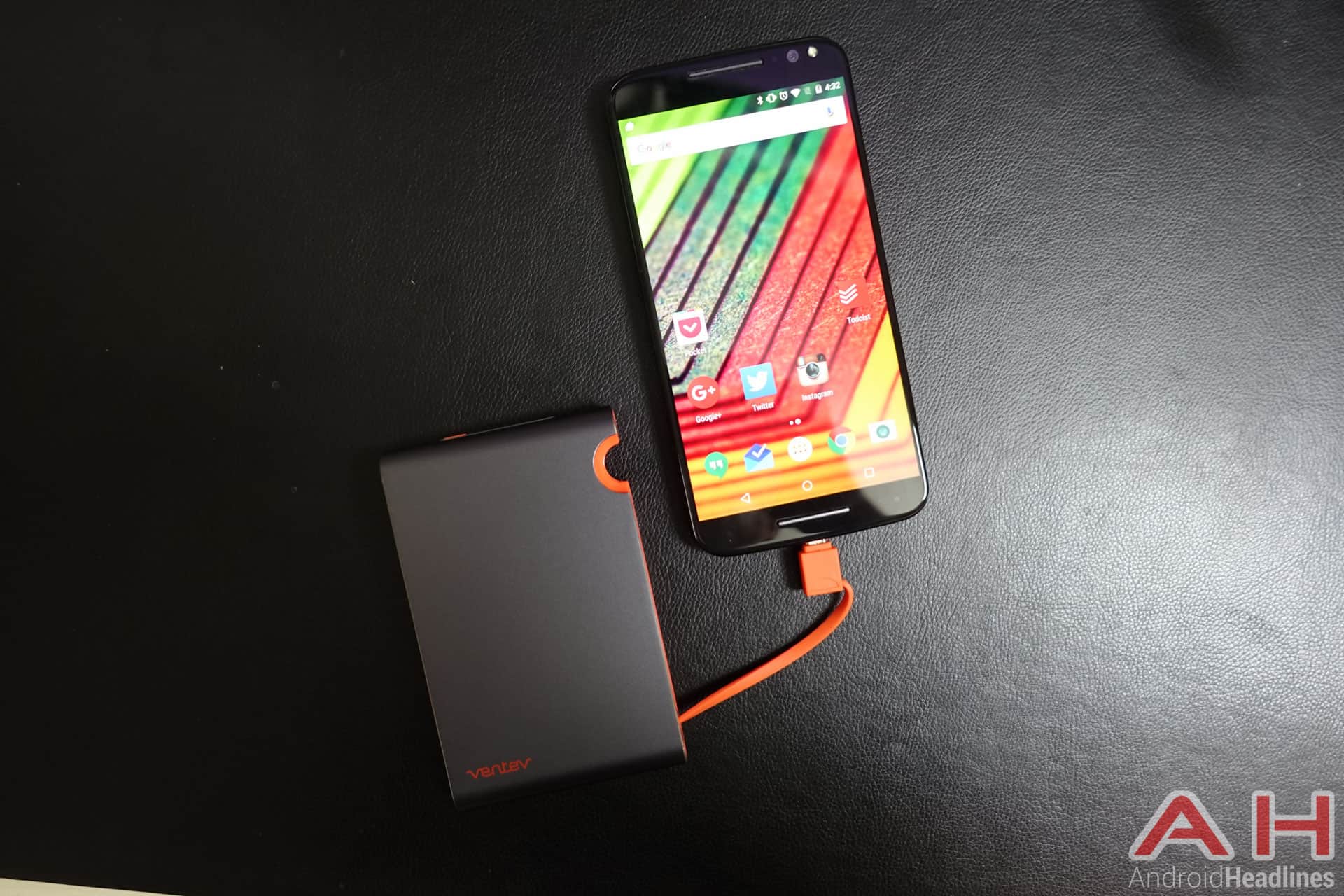 The Powercell 6000c from Ventev is a great power bank to pick up, especially with the holidays right around the corner. For those that are always on the move, this is a great way to stay connected to the connected world. If you do have a device with USB Type-C, though, you will want to be sure you carry your USB Type-C cable along with you, as the included micro USB cable won't do much good for charging your smartphone. Now the Powercell 6000c is a bit pricey, we're looking at $70 for this one here (over on Amazon it's $75).

The big question is whether you should buy it or not. And it's actually tough for me to find a reason to recommend the Powercell 6000c at this price point. When it really doesn't do anything different from the many other power banks of higher capacities that are about a third of the price of the Powercell 6000c. The build quality is much better on the Powercell 6000c compared to the others that are available on Amazon right now. So if you really care about build quality, then this is a great battery pack to pick up. If it were priced closer to $35, then it'd be much easier to recommend to everyone. But you can get much more, for much less, elsewhere.