JBL announced a number of speakers which were due to become available in the coming months and so far, they have been releasing them on a timely schedule. Already, the likes of the JBL Xtreme and the JBL Flip 3 have landed on the market and are great additions, but differing greatly in their size and power. One of the other speakers which was said to be arriving was the JBL Pulse 2 and this one in many ways bridges the various gaps between the likes of the JBL Flip 3 and the JBL Xtreme. Especially in terms of price, as the Pulse 2 is available for $199.99. However, the Pulse 2 is far more than just a speaker and offers some very unique features. 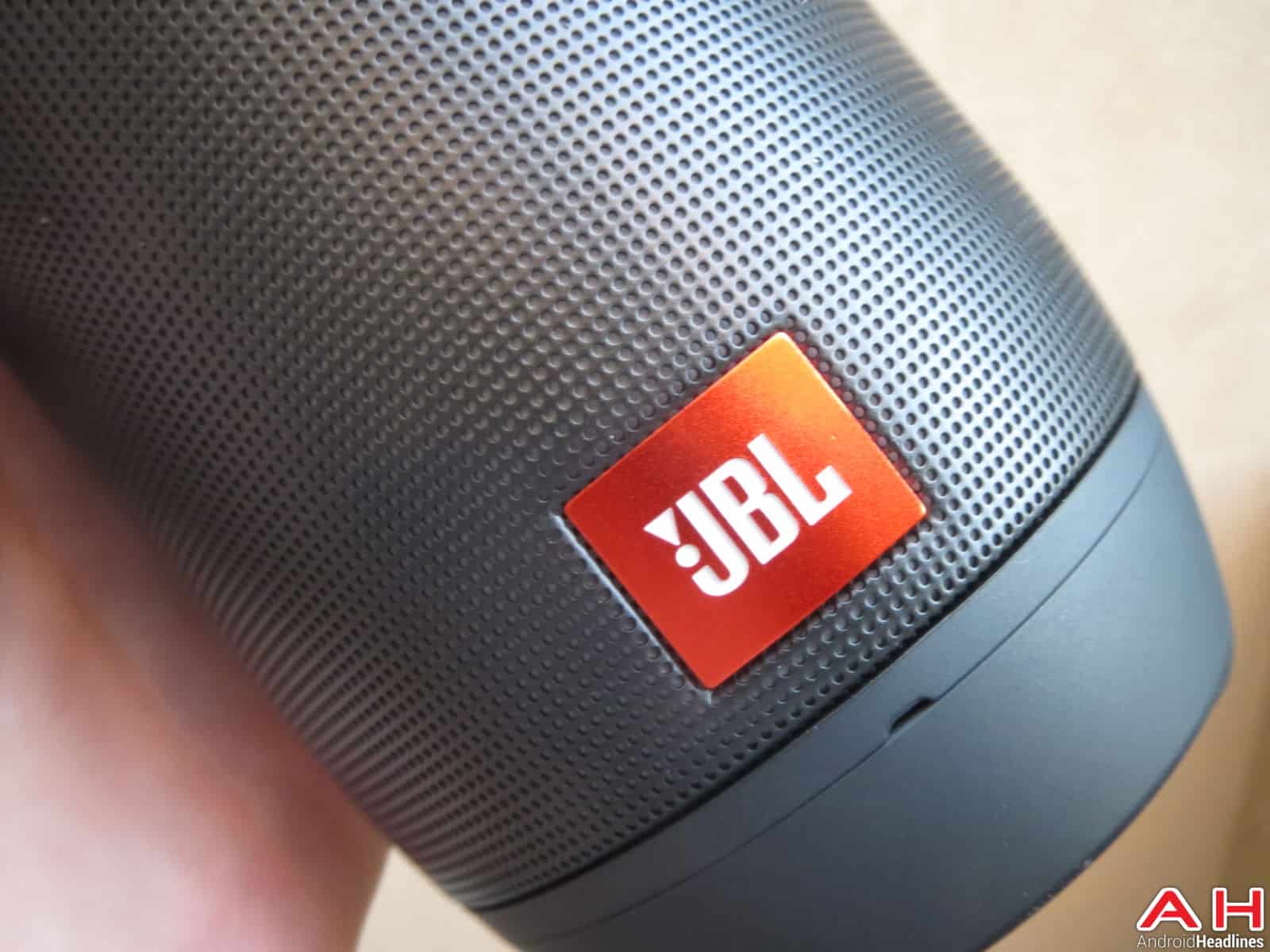 In terms of the specs, the JBL Pulse 2 comes equipped with two 45 m drivers, along with dual external passive radiators for bass response accommodation. The total wattage output is rated at 16-watts. Frequency response ranges from 85 Hz through to 20 kHz and the Signal-to-Noise ratio is 80 dB. In terms of connectivity, the JBL Pulse 2 connects via Bluetooth 4.0 ensuring a connection can be established and maintained from a maximum distance of 33 ft (roughly 10 m). This is a portable device and comes equipped with a 6000 mAh battery which is said to offer as much as ten hours of continues playback (music and light show). In terms of the dimensions, the JBL Pulse 2 measures 84.2 mm in height, 194.4 mm in width and 84.2 mm in depth, while weighing 775 grams. 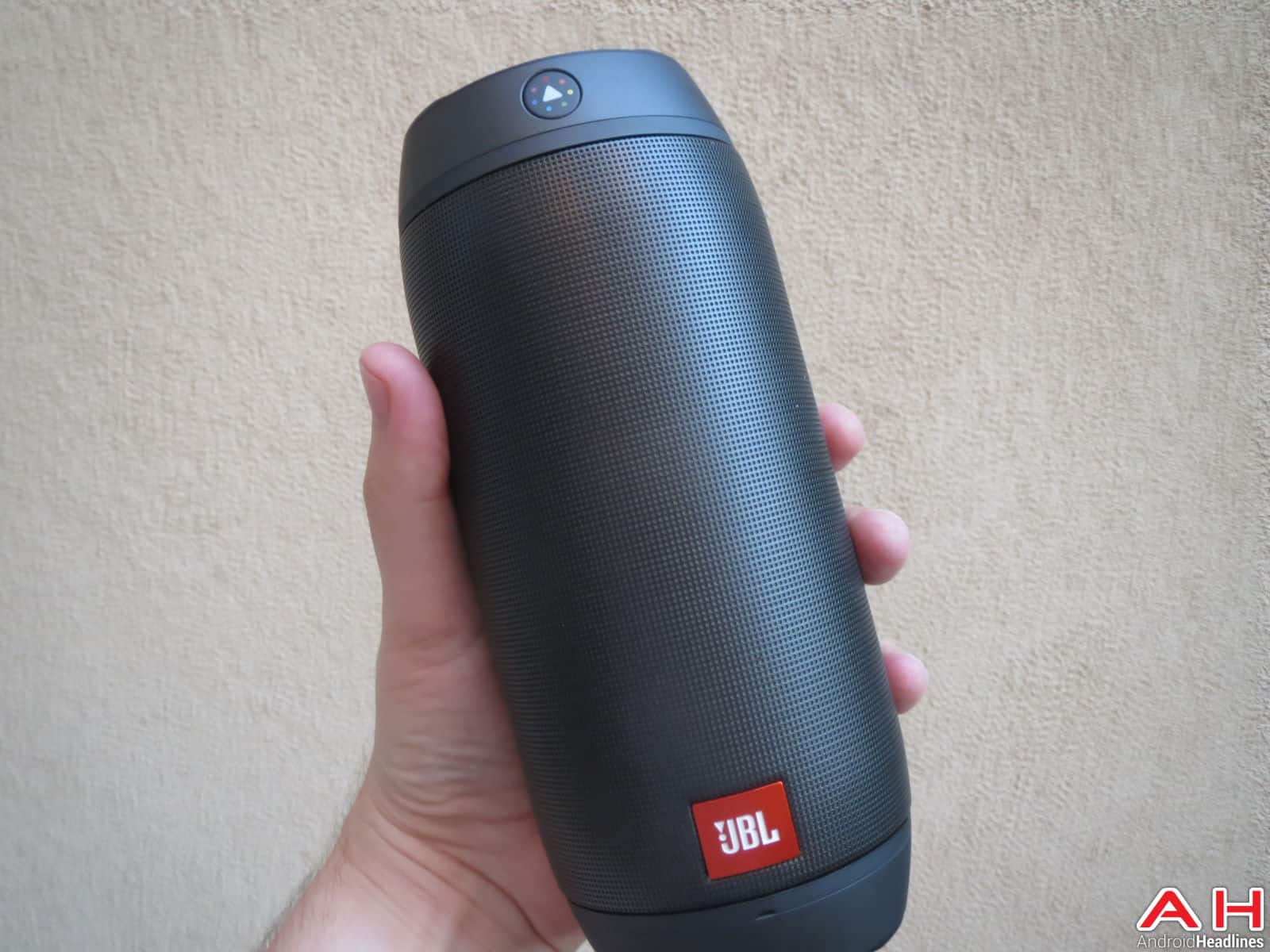 If you are familiar with the previous JBL Pulse model or even any of the JBL Flip range, then the Pulse 2 will look very familiar. In fact, on the surface it looks identical to the previous model and the only obvious difference between the Pulse 2 and the Flip 3 is the size, with the Pulse 2 about twice the overall size. The Pulse 2 is available in two different colors, white and black. Here we have the black version and as you will notice from the images, it is an all over black speaker with virtually no noticeable deviation of color besides the red JBL logo plaque situated on the lower front of the speaker. 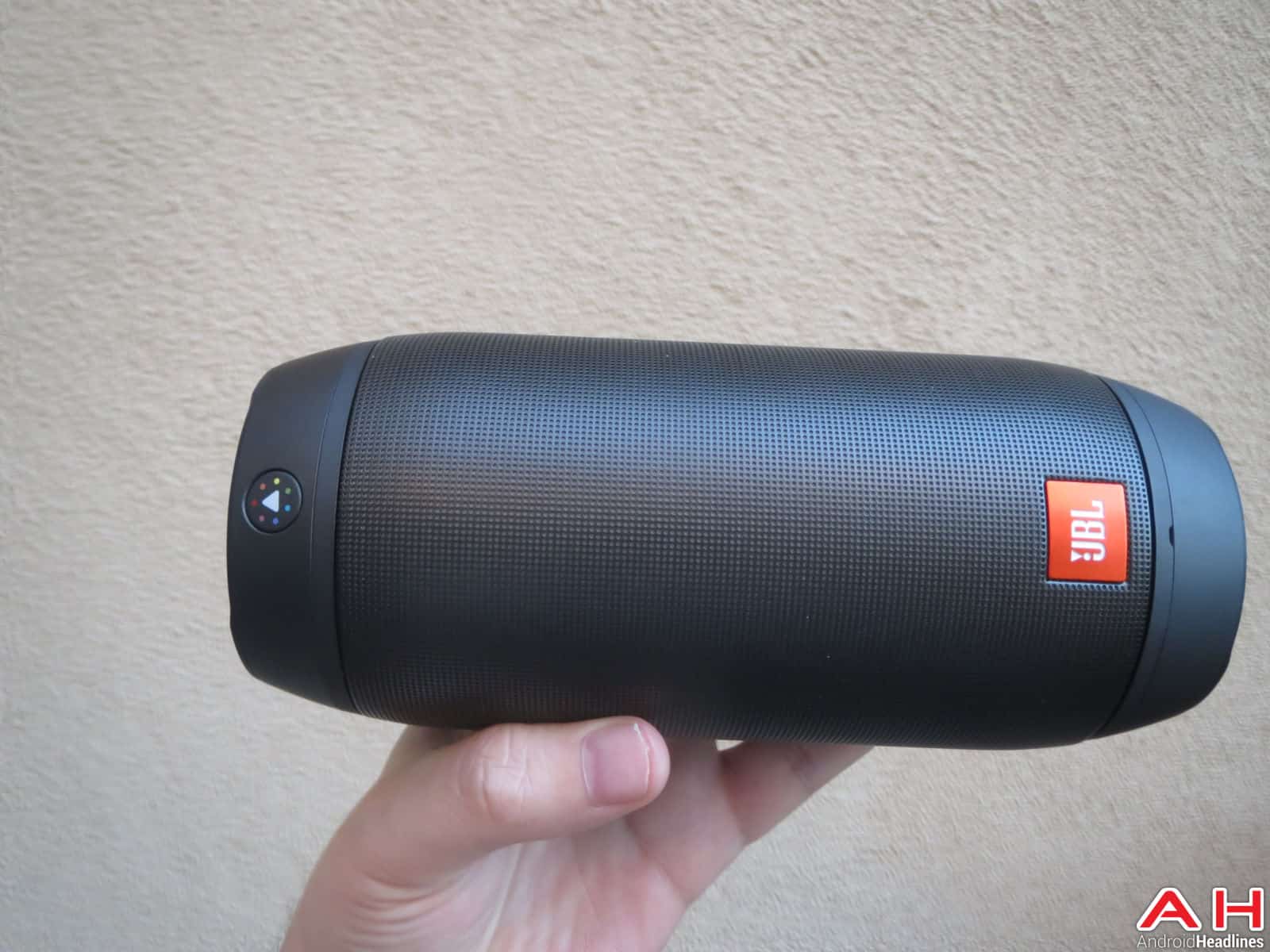 That said, one aspect compared to the Flip 3, is that the Pulse 2 does not feel as durable and lacks the overall rugged protection on offer with the Flip 3. While the Flip 3 made use of a woven body, the Pulse 2 opts for a more traditional mesh looking body which encircles the entirety of the body. With the exception of a small strip down the rear side which houses virtually all of the controls. 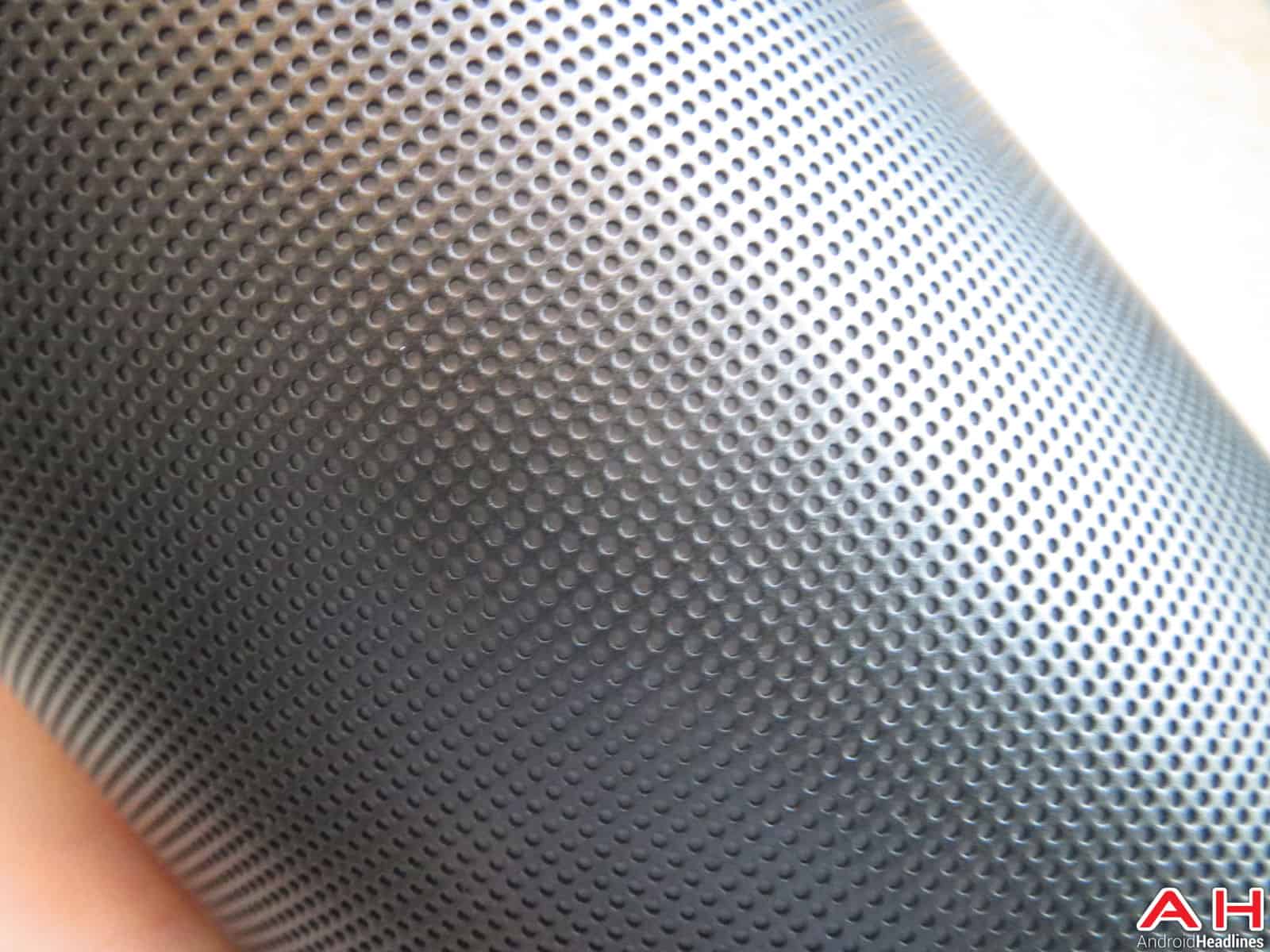 These controls consisted of the light prism sensor (we will get to this), the play/pause button, the JBL Connect (link) button, volume up, volume down, light show activation button, Bluetooth pairing key and the power button. 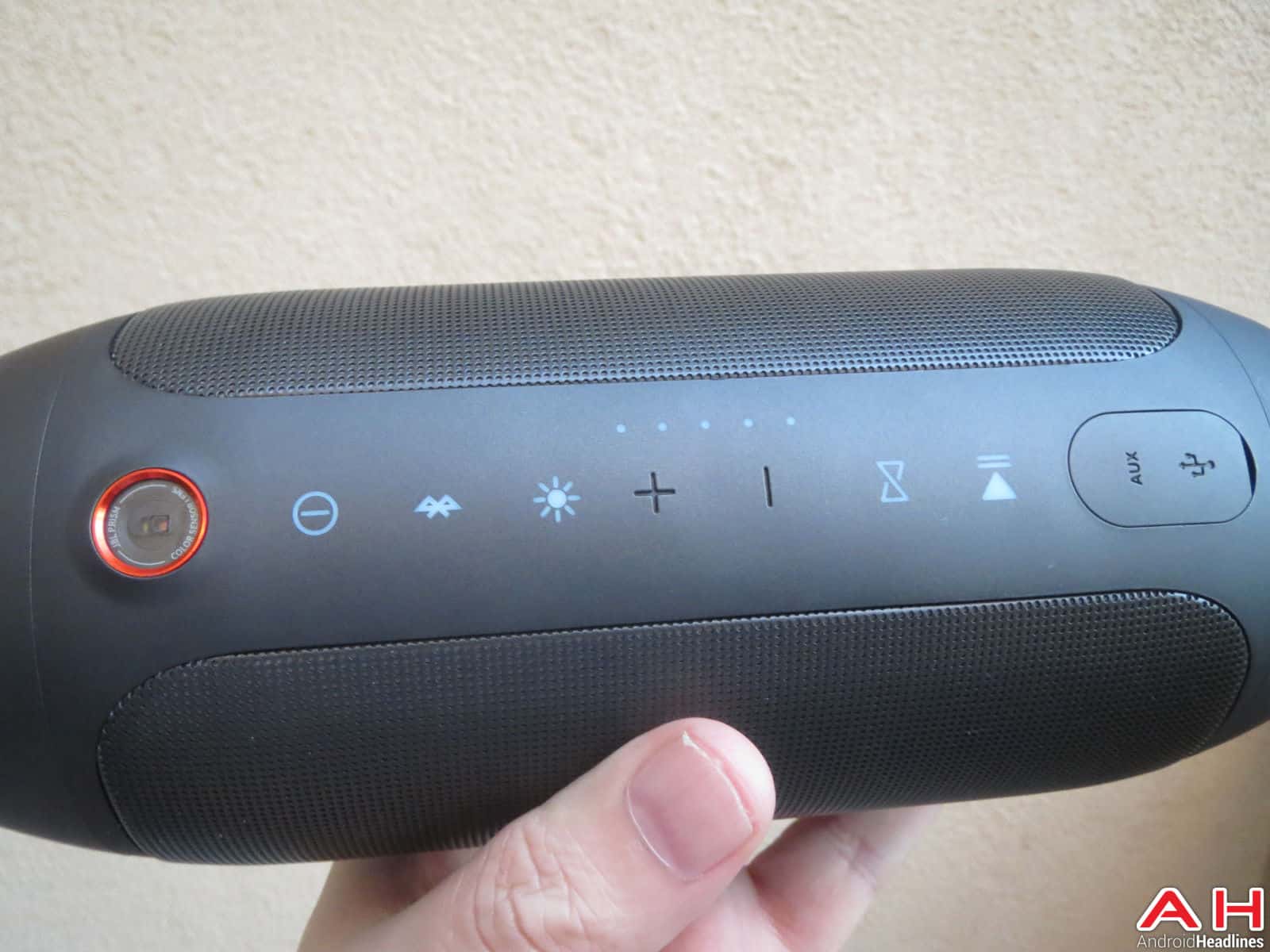 This side also houses the aux in and USB charge port which are both covered by a flap when not in use. 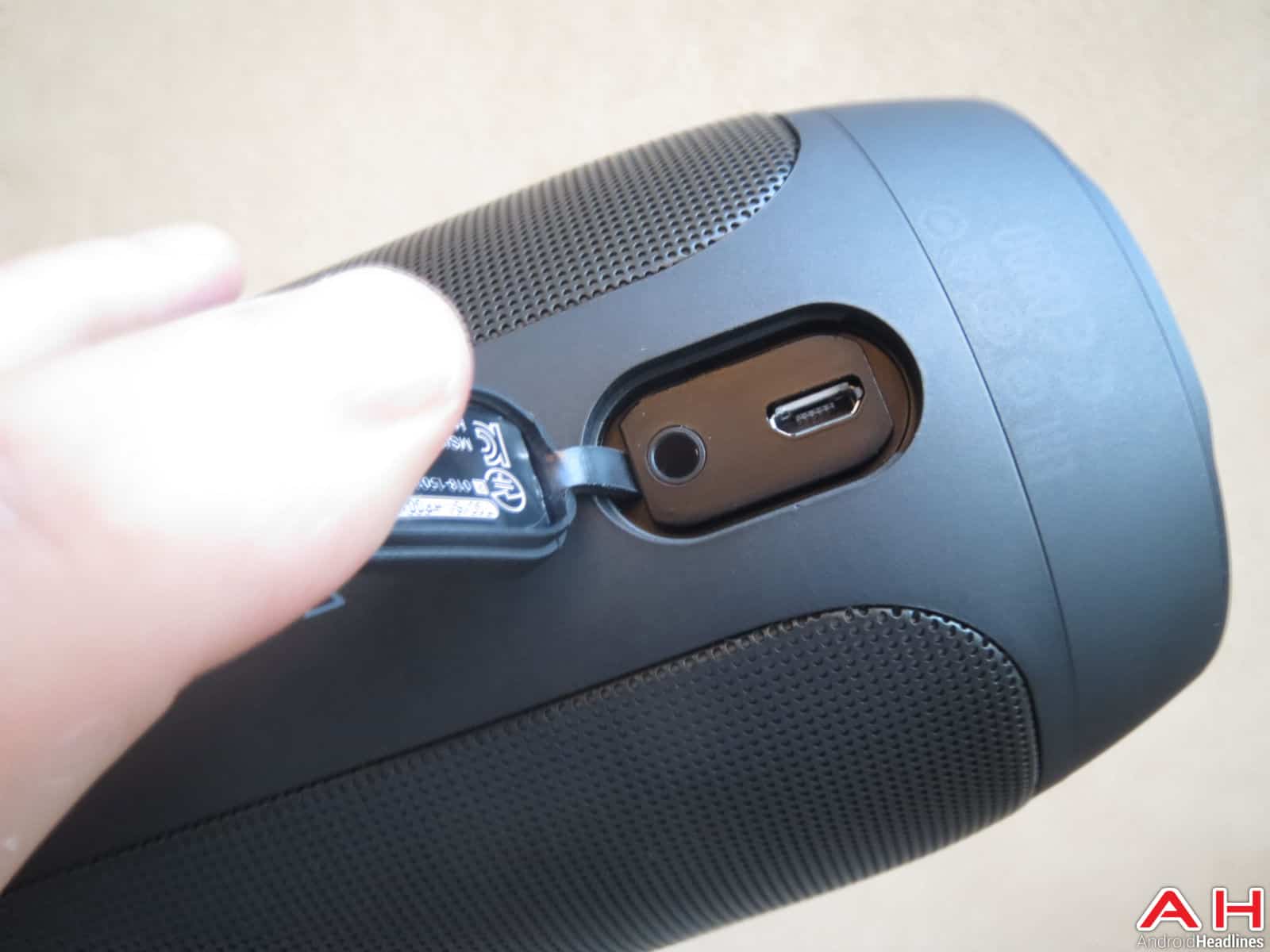 In spite of its overall less rugged design, the Pulse 2 is a waterproof rated speaker. Although, the protection is more geared towards being splash-proof than waterproof which essentially means that there are no issues using the speaker while in the shower, or by the pool or even being washed under water running. However, where the difference does lie is that this is not a speaker which is designed in any way to be submerged. So you can happily get it wet, just not dunked.

Moving to the sides of the JBL Pulse 2 (technically the top and the bottom in the upright position) and these are largely identical to the Flip 3, although, this is one of the areas where it has changed from the previous Pulse model. On the JBL Pulse, the top housed the control area for the light show while the bottom housed a full facing end cap with the NFC marking. On the current Pulse 2, both top and bottom are not simply where the passive radiators are located. 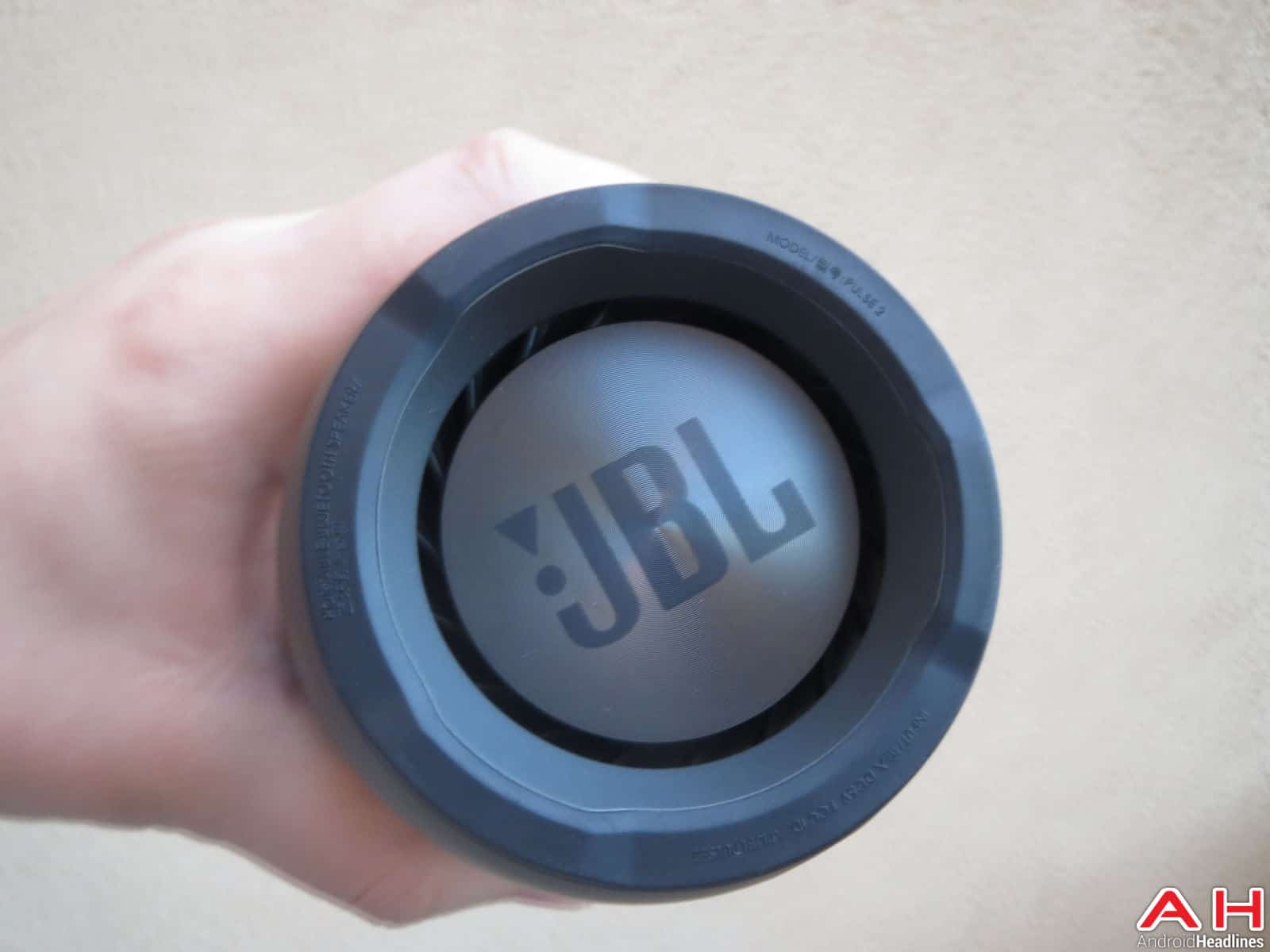 Diving straight to the takeaway, this is one of the better quality speakers you will come across. This is a speaker which firmly falls in the $200 launch price range, which is currently one of the most fought and competitive areas for Bluetooth speakers as there are a ton of choices available. However, there is nearly always a compromise somewhere. With the JBL Pulse 2 it is difficult to find that compromise. This is a very good performing speaker. The sound quality is excellent and is one which will certainly surprise most people.

The size alone does dictate that a speaker such as this would be limited in its ability to output, at least an output which is clear. However, the JBL Pulse 2 punches well above its weight in sound. For the size, you would be hard pressed to find a similar speaker, for a similar price, which can output as loud, as clear and certainly as clear when playing loud. The vocal range is by far the selling point for the JBL Pulse 2 and any genre which makes use of predominantly vocals will benefit from the clarity on offer.

For the more bass heavy listeners, this is obviously going to be an issue to some extent on a speaker which comes with such small drivers. However, when buying a speaker like this, a compromise in bass performance is to be expected. That said, on the Pulse 2 that expectation is certainly less warranted. The bass is punchy and surprisingly tight. Even when volume is increased, the JBL Pulse 2 (for its size) handles the extra push well.

Moving to the 'other' feature of the Pulse 2 as it is worth remembering this is sold as a speaker and a 'light show' and the light show element works surprisingly well. Now, before testing the Pulse 2 out, if you were to ask me, do I want a light show attached to my speaker, the answer would be a resounding "no". However, that would have been a premature answer as the light show element adds a nice touch to what is quickly becoming an overwhelmed market of products which are all too similar.

To break it down. The light show is designed to reflect your mood and as such is rather more complex than you might expect. Yes, the light works along with the beat and frequencies being outputted, so faster music will result in a greater light distribution, slower music, slower lighting, etc. etc. etc. That said, if you do buy the Pulse 2, I would strongly encourage you to download the JBL Connect app as this not only gives you control over the speaker in general but with the Pulse 2 works as a more in-depth means to communicate and control the lighting. From here you can clearly select the type of mode you would like with the light adopting different shapes like a rain pattern, traffic, Hourglass, Canvas and so on. 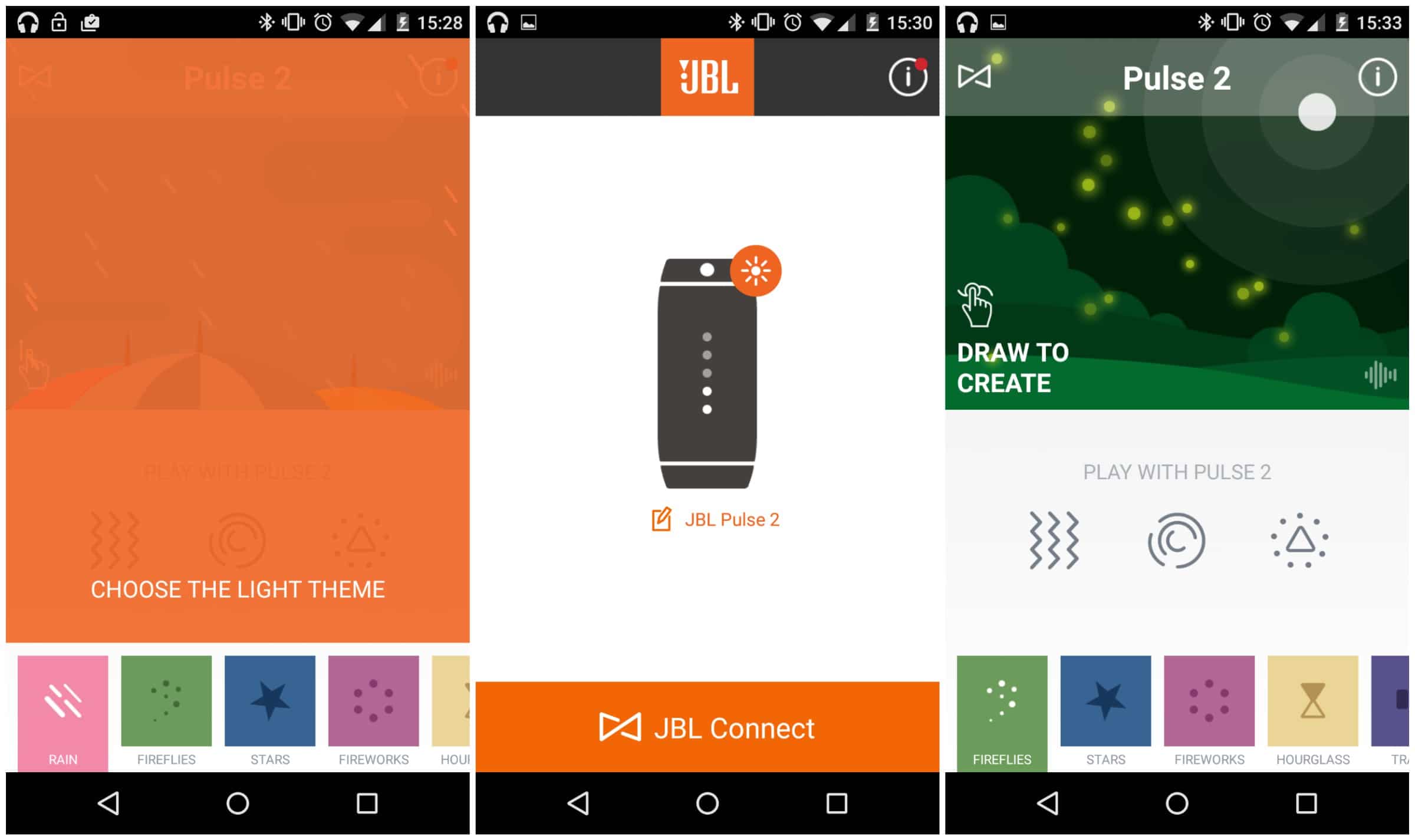 To be clear, these can also be activated directly to the unit, however, it is little more fiddly as you have no means to see what you are elected and instead sort of scroll through the options by clicking the light prism.

Speaking of which, the light prism is a button which comes on one of the sides of the speaker and holds a dual ability. As well as being able to scroll through the modes, you can also actually pick a color for the light show to adopt. On the corresponding opposite side, the Pulse 2 has a sort of light camera. When the light prism is button is pressed the camera flashed and assumes the color it reads. Now, in truth, this is not the most responsive feature as it does find it difficult to sometimes identify a color, but overall, it was a nice additional and a fun feature. As long as you don't take it too seriously or criticize it too much, the ability to snap a color and apply it works. 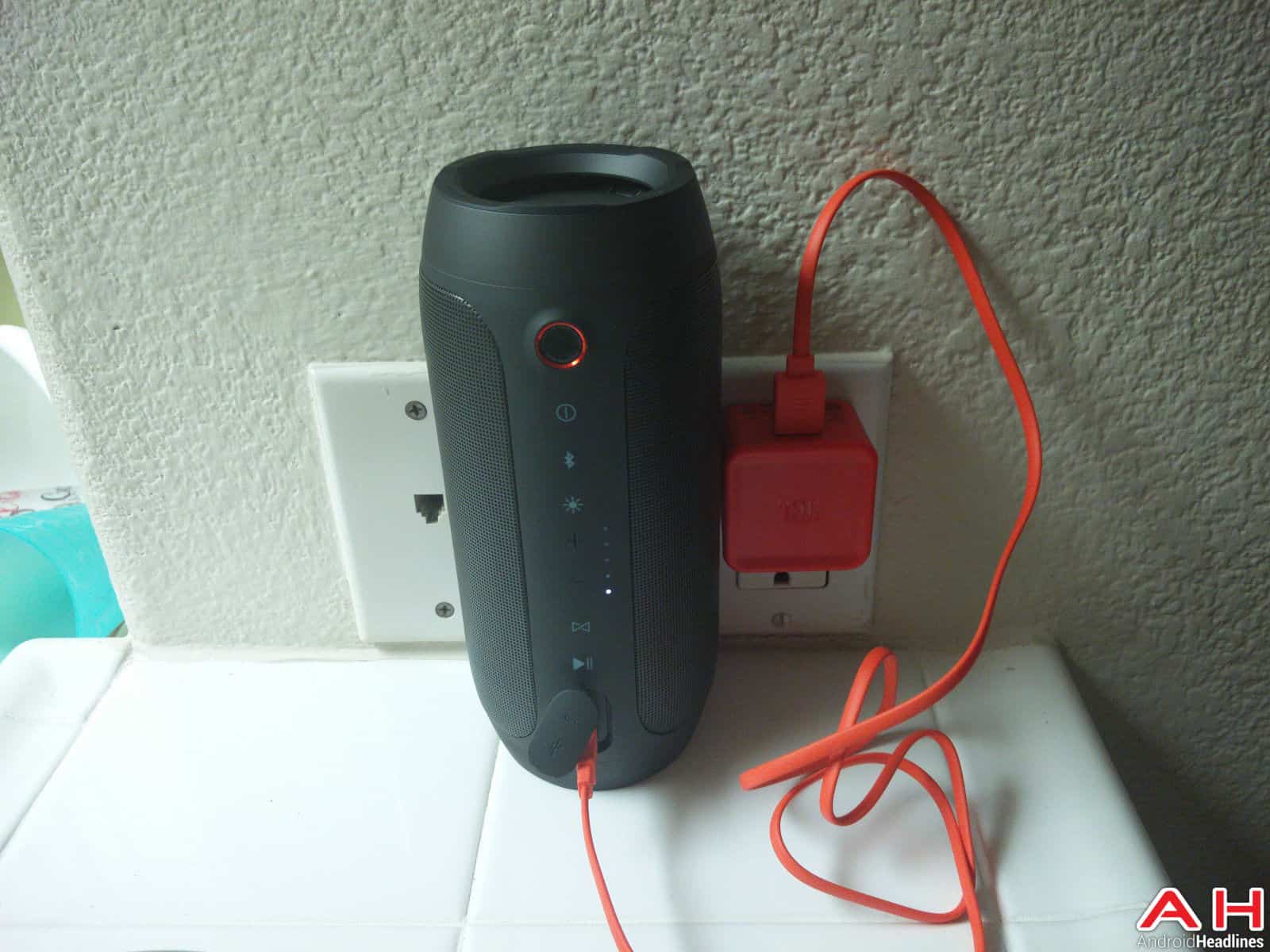 Battery life on Bluetooth speakers is an area which is seeing massive improvements over recent times. Now, pretty much all Bluetooth speakers guarantee a minimum level of a few hours in between charges and the JBL Pulse 2 is no exception. In terms of the numbers, the Pulse 2 comes equipped with a 6,000 mAh battery, which according to JBL, will offer up to ten hours of playback.

What's worth noting here, is that the ten hours quoted is for both music and light playback at the same time. Taking this into consideration, this is a massive improvement over the previous model, which also offered a light show but was only created to offer about five hours of playback for both music and light. So that in itself highlights how far the improvements on the battery have come on this model. Not to mention, when you take into consideration that other speakers do not offer a light feature, ten hours of continuous playback for both is quite good.

In terms of real world usage, there is not much to complain about in all honesty. As noted, this is not meant to be a speaker which can compete on battery life with some of those that come sporting 10,000+ mAh batteries and logging in excess of 24 hours of usage. This one is designed to easily offer a full day's usage with both music and light activated. In truth, this is easily achievable. During testing, the JBL Pulse 2 was more than capable of offering the stated ten hours of playback. Although, as always this is volume determined to a certain extent, during testing, the general length of battery life seemed to be consistent across different volume testing and as such, it is a fair assumption to make that you will easily be able to make do with 8-10 hours of playback before needing to be recharged.

In terms of charging, the Pulse 2 comes with a battery life gauge on the side of the device in the form of a dot measuring stick. So when the device is on, the dots will light up to represent the level of life on offer. As a side note, when the dots fade, the battery was still able to continue for a significant amount of time. 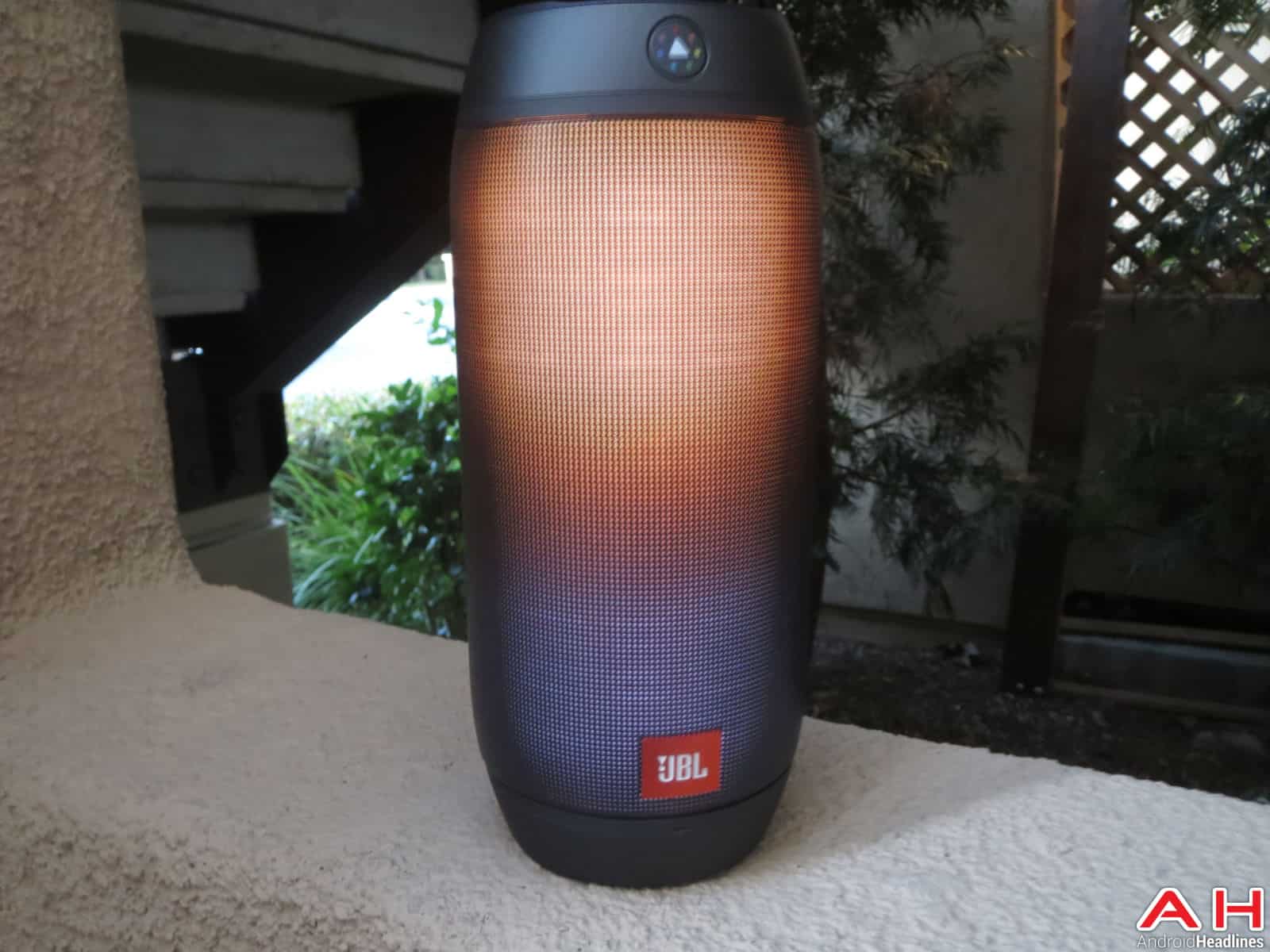 The JBL Pulse 2 is a seriously good little speaker. I say little, although in reality it is not tiny. However, for the output it can achieve, it is surprisingly small. In fact, taking away the light show element (which to some, might seem novelty), purely on the basis of the quality of the sound of the Pulse 2, this is a speaker seriously worth considering. While the bass is not pounding, it is there, it is clear and it is enough. However, where the JBL Pulse 2 really shines is in the vocal range and offers a much clearer level of mids and tops than you will find on pretty much anything around this price. This is a seriously nice sounding speaker.

That said, when you do factor in the light show element, the Pulse becomes even more of a great buy. Yes, this is is a novelty aspect, but one which personally works and adds a level of flair that you will not find by other speakers which on the whole are starting to get to close and lacking differentiation. With the Pulse 2 , you have that differentiation and one which will certainly be a talking point at any party or gathering you might throw.

Should you buy the JBL Pulse 2?

Advertisement
Trusted By Millions
Independent, Expert Android News You Can Trust, Since 2010
Publishing More Android Than Anyone Else
42
Today
80
This Week
547
This Month
1222
This Year
111336
All Time
Advertisement