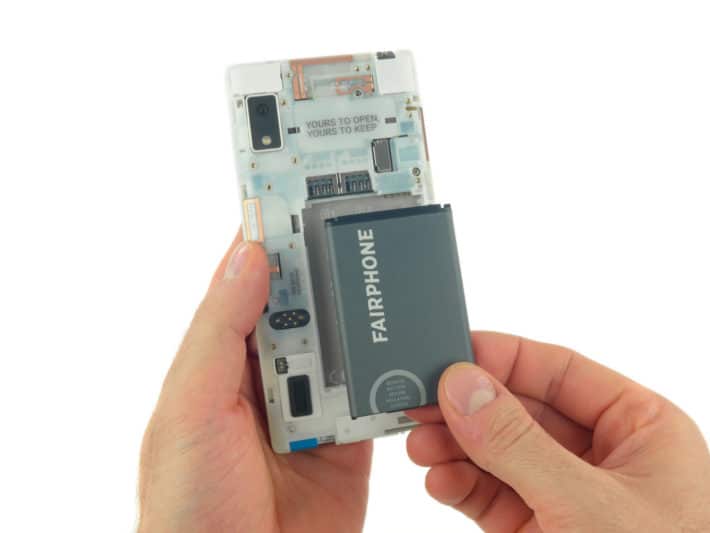 Fairphone is a company that decided to build a smartphone with social awareness, they use conflict-free minerals in its construction and they respect worker rights and improve their wages. The phones they design are meant to last longer and to be user-repairable so less waste is generated. That’s why they built the Fairphone 2 as a modular phone, it can be disassembled to upgrade some of its internals, these parts can last over 50 times of disassembling and reassembling. The phone can be ordered now and it will be delivered starting in January. iFixit has disassembled the first Fairphone and it was rated highly for its repairability, and now they have torn down the Fairphone 2 as well, so we’ll see if this is indeed as easy to repair as it was meant to be.

They got a Fairphone 2 with a transparent back, so some components are already visible. They were able to remove the back of the phone without needing tools and there was also no adhesive holding it. The battery is easily swappable and it uses spring contacts just like in older phones. The two blue handily labeled switches are used to remove the display, they just flipped them and slide the display out. There are some pogo pins on the mid frame which connect to some others at the back of the display. The mid-frame has 3 modules, in the top one, there’re the headphone jack, earpiece speaker and the front facing camera. The one in the middle right includes the camera module and the one on the bottom right includes the microphone.

Up to this point, they haven’t used any tools other than their hands, which is quite surprising for today’s standards. The three modules can be removed by unscrewing some identical screws using a Philips #0 screwdriver, each of the modules is connected using spring contacts instead of flex cables or press connectors. If more advanced users would like to repair one particular module, they just need to unscrew some Torx T5 screws and many of the components of the three modules can be individually repaired. The motherboard is connected to the back plate of the phone using spring contacts and there are some unused ports to further expand the phone’s functionality. iFixit gave it a 10/10 for its easy repairability and the company will even include repair documentation and instructions.