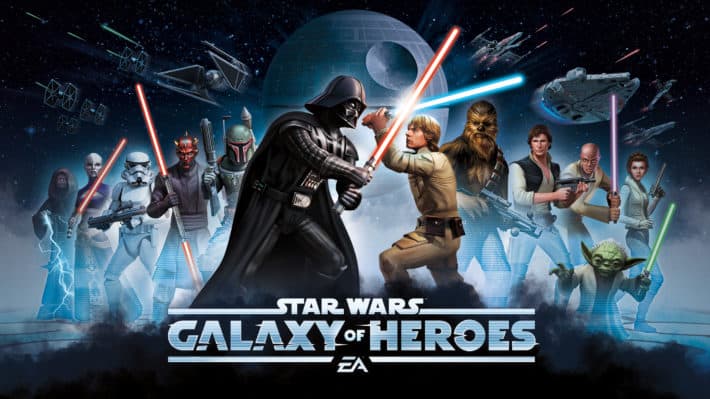 Just in case you hadn't noticed, it feels like Star Wars month as just about everywhere you turn there seems to be something related to the franchise. Google's partnership with Disney has led to a multitude of Star Wars themed features being integrated into various Google apps like YouTube and Google Search, and starting next week Cardboard owners will get to experience a unique Star Wars VR experience created by ILMxLabs. If you need a fix of the Force now though and also happen to enjoy mobile games, the latest title to hit Android is called Star Wars: Galaxy Of Heroes, and it's not even in a galaxy far, far away. It can be downloaded right from the Play Store from the comfort of your couch.

This new game from EA fits right into the role-playing genre, although not quite like what you might experience from the action-rpg Star Wars Uprising, and is more along the same style of play as Heroes of Dragon Age, also an EA title. There will be bits of strategy mixed in as well, and you'll be able to collect different iconic Star Wars characters to play with in your team makeup. Combat is turn by turn, giving battles a slight challenge if you don't pay attention to who is attacking and what abilities they have, or to what attacks you yourself are unleashing.

You can build up teams from both the light side and the dark side so no matter who you have a soft spot for you can play the game how you like. As this is an RPG game, each hero you collect will have a certain level attached to them with abilities appropriate to their skill level. As you progress through the game, your heroes will level up after gaining experience from winning battles and their abilities and stats will raise in level accordingly, making them even stronger and allowing you to discover new powers and attacks. The game also spans multiple Star Wars time frames from various films and TV series shows, so there's plenty to see and tons of different characters to collect. Star Wars: Galaxy Of Heroes is free to play, and you can pick it up from the Play Store if you're interested.