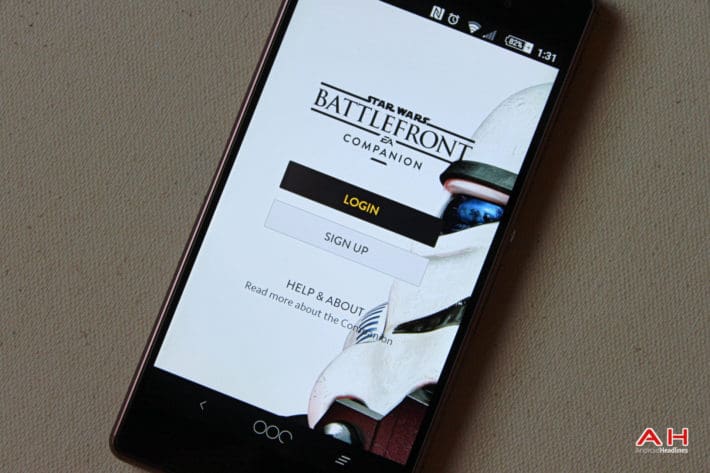 As gaming becomes more and more popular, so do the use of apps and smartphones. In relation to this, game companies are looking into more and more ways to allow gamers the ability to enhance their experience, with the use of companion apps they can download and install to their mobile devices. Bethesda for example, launched the Fallout Pipboy app to the Play Store not too long ago to prepare gamers for the launch of Fallout 4 today, and in the same exact fashion, EA has just launched the companion app for Star Wars Battlefront, a multiplayer first-person shooter due out for consoles and PC in the near future.

While the main use of the app will be to allow for in-game integration uses like seeing a larger map displayed right on your device which you can interact with during gameplay, it'll also include a playable mini-game called Base Command, a card game which players can engage in for a chance to earn usable items for Star Wars Battlefront called Star Cards. Star Cards won't be the only thing gamers can earn through playing the Base Command game, and none of the items are earned directly as EA has set it up to where you earn in-game credits with which players can spend on Star Cards.

The app  also lets you view you personal in-game details, like career progression in the game, as well as the ability to view your stats and how your performance in game stacks up. it wouldn't be much of a companion app without a social element to it, so EA has integrated the ability to keep tabs on your friends who also play Star Wars Battlefront no matter what platform they play on. Should they sign in, the companion app will alert you so you can sign in too. In addition to this, you can also compare your stats and performance against your friends, because a little friendly competition never hurt. Lastly, the app also sends out alerts to players about any upcoming important details and news for Star Wars Battlefront like upcoming events. The app is free to download and use, although it's really only of use if you play the main game.