Skip to content
Trusted By Millions
Independent, Expert Android News You Can Trust, Since 2010
Publishing More Android Than Anyone Else
10
Today
10
This Week
10
This Month
6773
This Year
124292
All Time

Modern smartphones have more ways than ever in order to secure our data. As well as passwords, PINs, we have patterns, fingerprints and even iris scanners.We can encrypt our data (and many devices come with the device already locked down), but people still do not bother with secure lock screens. There are a few reasons for this; one might be that it is an inconvenience to enter a code, but presumably this is the mindset of people who have never lost their device and had their personal data looked through. The second is that people are less concerned about losing their information than we might suspect. With this second point in mind, Avast, the antivirus company, has conducted a survey across eleven nations to determine what is important to smartphone users when it comes to information.

Avast asked around 23,500 users what is important to them when it comes to smartphone security and some of the results were interesting. The obvious attention-grabbing headline is that people care more about their banking details than nude pictures on their device, but this may be easily explained in that apparently not everybody keeps nude selfies on their smartphone. Fancy that. According to the data, two thirds of American smartphone owners would not be bothered or have nothing to hide on their device when it comes to pictures, compared with just 37% of Russians and 44% of Indians asked in the survey. More people manage their finances using their device and leaked banking information was more of a concern, but despite this, not everybody locks their devices but again this is highly variable. Almost 90% of Spanish smartphone users lock their device, around 80% of French users too. At the opposite end of the scale under half of British smartphone users lock their device and this number is a little over a quarter for Argentine respondents.

Another interesting observation from the survey is how the most private information kept on a smartphone is our collection of text messages, whereas banking and personal pictures are less commonly the most private information. This might against the grain that the smartphone is the central electronic device in our collection but instead highlight that our text, or WhatsApp, messages are only available on our smartphone whereas our banking or photo libraries might be available on other devices. Indeed, WhatsApp is the most protected application ahead of the photo gallery; Facebook was fourth, The Chrome browser, files, contacts and ordinary SMS or text messages were least protected. Despite the headline news stories about government spying, no countries ranked the Government as their primary fear of intrusions. Instead, it was either their mother or cybercriminals, depending on the location. Government spy agencies were ranked second in a number of countries. 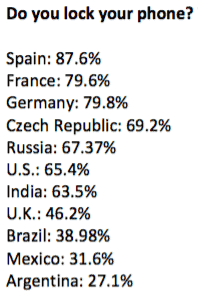 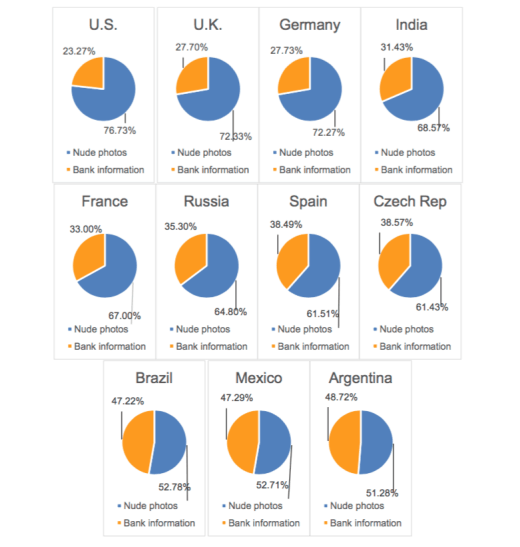 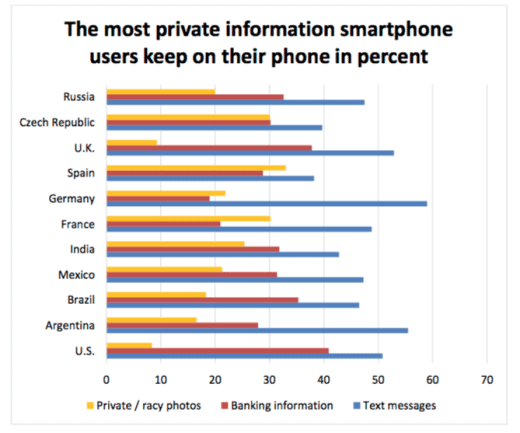