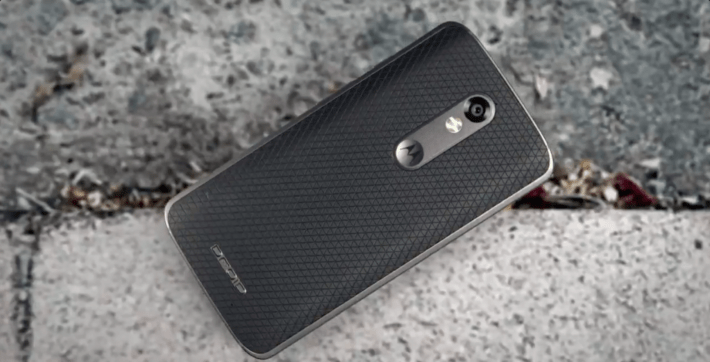 We've been seeing leaks for the new Droid's since before Motorola announced the new Moto X's back in July. So we know quite a bit about these new Droid's already, and Verizon and Motorola are set to announce them next Tuesday in New York City. We're looking at a Droid Turbo 2 and a Droid Maxx 2. The Droid Turbo 2 is basically a Moto X Play with souped up specs, and it'll be the first Droid with Moto Maker support.

The teaser that Verizon put on Twitter today shows a Droid Turbo 2, or a Moto X Play with a Droid logo, dropping slowly and just before it hits the ground, some text comes in and says "The new Droid is Dropping Soon". Likely a play on the rumors that the Droid Turbo 2 is going to have a shatterproof display, which we'll definitely have to put to the test when the device is announced next week. In their Tweet, Verizon simply says "Introducing the perfect phone for imperfect people." And posting it shortly after the HTC event for the One A9, makes us wonder if Verizon is carrying the HTC One A9, it appears to not be carrying it. And instead big red is looking to grab their spotlight a bit.

The Droids from Verizon and Motorola are always huge sellers. With Verizon's marketing push behind them, they are typically some of the best selling smartphones on Verizon's shelves, of course behind the Galaxy S6, Galaxy Note 5 and new iPhone 6S' models. Last year with the Droid Turbo, Verizon really brought the flagship back to the Droid line, with top-of-the-line specs in every category. And it looks like they are planning to do it again. At least with the Droid Turbo 2. It will be interesting to see if it can actually do 48-hour battery life, as the original Droid Turbo was marketed to last 48 hours, but it just didn't last that long. One thing is for sure, we shall know this time next week. Seeing as we're only 7 days away from Verizon and Motorola's big reveal. You can check out Verizon's teaser in the source link below.