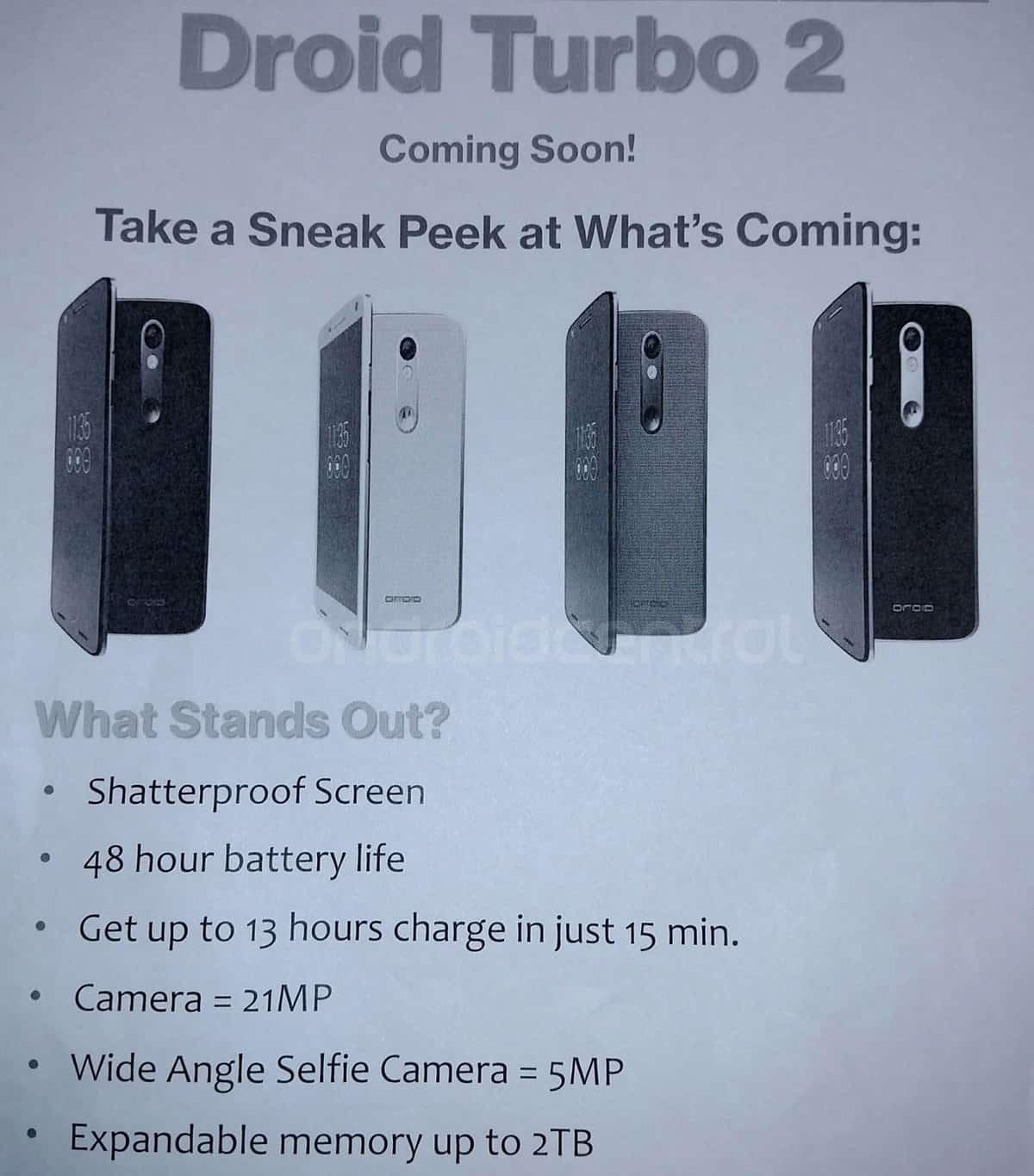 The Droid Turbo 2 from Motorola is all set to hit primetime by all accounts, but hardly anything will be a surprise once the device is indeed officially announced by the Lenovo-owned company at long last. All the rumors, leaks and speculations over the past weeks have revealed just about all there is to know about the upcoming device, and earlier today, yet another leak – this time around from Verizon – has revealed some more info, confirming certain facts already known about the upcoming Motorola smartphone. According to information coming in, a scanned copy of what seems to be an internal memo from Verizon, is now in the public domain. The fact-sheet details some of the features and hardware specs of the upcoming smartphone from Motorola, and seems to corroborate what we already know about the device for the most part.

Coming to the latest set of revelations as part of the leaked info-sheet from Verizon, the document seems to suggest that the Droid Turbo 2 will come with a shatterproof display, which is something we've already read before. The leaked document also seemingly confirms that the handset will ship with a 21-megapixel rear-facing primary camera and a wide-angle 5-megapixel front-facing secondary camera. One of the new revelations however, seems to be the fact that the upcoming smartphone will apparently have up to 48 hours of battery life. There's no word however, on the size and particulars of the battery on the device, but seeing as last year's Droid Turbo came with a massive 3,900 mAh battery, one would think a large battery should be on offer this time around. The document also seems to indicate that just 15 minutes of charging will be enough to use the phone for up to 13 hours. Another point to note, is that the phone will apparently support up to 2 TB of expandable storage.

Coming to some of the rumored hardware specs on Motorola's upcoming Droid Turbo 2, the handset will reportedly feature a 5.5-inch display with a QHD (2560 x 1440) resolution. The device will reportedly be powered by a Qualcomm Snapdragon 810 SoC, which comes with a 64-bit octa-core CPU. The phone is also believed to ship with 3 GB of RAM, and will reportedly come out of the box with Android 5.1.1 Lollipop instead of the latest and greatest from Google – Android 6.0 Marshmallow. Motorola is expected to unveil the Droid Turbo 2 at a press event scheduled for the twenty-seventh of this month, and Verizon has already released a video teasing the impending launch of "the perfect device for imperfect people".