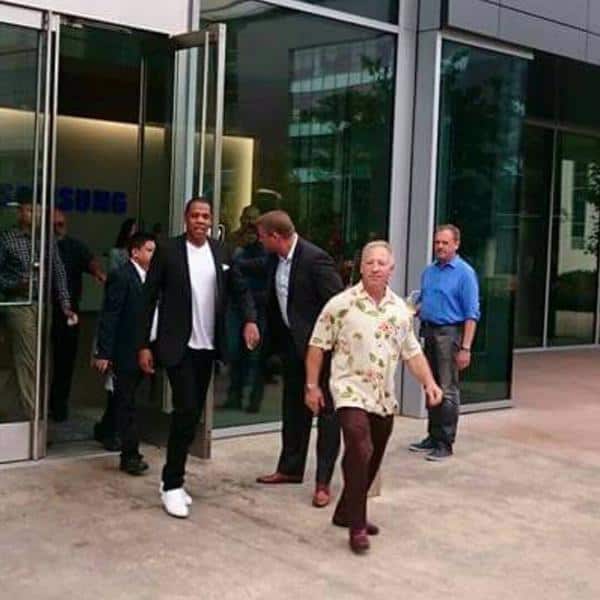 Rapper and Hip Hop mogul Shawn Carter, popularly known by his stage name Jay-Z, is a man who wears many hats. Having garnered fame and fortune through his music back in the nineties and earlier this millenium, he set up a production company named Project Panther Limited, which, earlier this year, acquired music streaming service Tidal for a reported fee of $56 million. The service is currently offered in as many as 31 countries including the US, and the company claims a paid subscriber base of 580,000 globally. While the company has many rivals in the music streaming market like Pandora, Spotify etc. it has already managed to create a niche for itself and is one of the better known brands in the market today, thanks in no small measure to the pull of the Jay-Z – Beyonc© marketing machine.

Coming to the developments earlier today, Jay-Z reportedly visited the offices of Samsung Research America in Santa Clara, California, according to an image posted by an NBC journalist based out of the Bay Area, Mr. Damian Trujillo. The photo shows Jay-Z exiting the Samsung offices earlier on Friday, which leads one to wonder what the visit could have possibly been about. As per a report carried by Variety, Jay-Z apparently had a meeting with Mr. Darren Tsui, while at the Samsung headquarters. Mr. Tsui happens to be Samsung's SVP of content and services, and the man currently in charge of Samsung's own music streaming service – Milk Music.

While public personalities and corporations often tie-up for product promotions, some news outlets seem to believe that the meeting might have had a lot to do with Milk Music, which has recently been in trouble, with reported layoffs and high levels of attrition, what with multiple chief executives resigning from the company in recent times. The visit meanwhile, has given rise to speculations on whether a tie-up between Tidal and Samsung's Milk Music might be on the cards at some stage, or maybe even a full-fledged takeover of Tidal by Samsung, as part of a consolidation in a highly competitive and fragmented music-streaming business. Meanwhile, neither Samsung nor Tidal have said anything officially about the latest developments. It remains to be seen what comes of this meeting between Jay-Z and the Samsung execs, but whatever happens, we'll probably get to know soon enough.