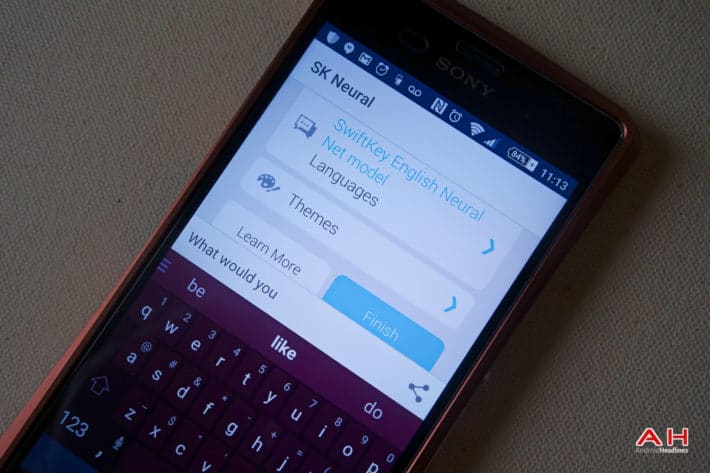 With the advancement of smartphones came the inevitable touchscreen only setup, which many people were hesitant to get on board with at first, simply because the feeling of typing without an actual physical keyboard was unnatural, unfamiliar and sometimes otherwise too difficult. Things changed though once more and more keyboard options came into play, many of which had advanced predictive typing technology built in. One of the most popular for as long as it's been out is Swiftkey, and now the Swiftkey team has come out with an experimental keyboard app as part of the Swiftkey Greenhouse arm, which applies neural networks technology in attempt to provide a more advanced predictive ability.

The app is called Swiftkey Neural Alpha and is the third app from Swiftkey's experimental projects team alongside Clarity Keyboard and Hexy Launcher. Swiftkey Neural Alpha aims to give you better and more accurate predictions, allowing you to type less and get assistance in finishing your sentences in a more fluent manner. The app is said to understand more complexity in the human language, with the ability to understand word similarity, longer sentence context and complex word relationships. According to Swiftkey the app will "know you so well, it will accurately predict your entire sentences, in your tone of voice, based on the situations that you're in."

The keyboard learns from you and your typing experiences just like Swiftkey's main app, but also goes beyond that and bases word predictions on the actual meaning of what it is you're typing so it can better predict the follow up words in your sentences, and potentially predict your entire conversation for you based on a single word. The more you use it of course, the more likely it is to accomplish this, but right of the bat it might be a better-suited offering for those who commonly have issue with the way current options predict their next word. This is an early version of the app and is experimental, which in itself makes it an unfinished product. Having said that, there's always the likely chance you may run into a bug or small issue, but over time and with updates those will begin to disappear. If Swiftkey Greenhouse is able to perfect this a little more there's also the possibility we may just see this technology implemented into a future version of the regular Swiftkey app.