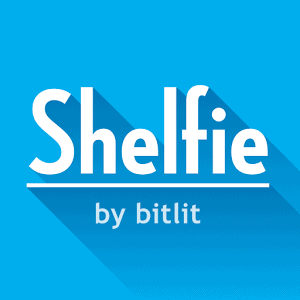 Shelfie is an Android app that hopes to blend the old and the new for budding readers all over the world. For bookworms with shelves full of books, but that are also looking to take these books with them wherever they want, Shelfie is a way of claiming digital copies of books you already own. It works by asking users to take a 'Shelfie' of their bookcase and then processing which books are eligible for an eBook copy at either the low cost of free or a heavily discounted rate in whatever format you like – which means you can use whichever eReader app for Android or eBook reader. Shelfie has deals with roughly 700 different publishers including the likes of HarperCollins, O'Reilly, Packt, Elsevier, Chicago Review, Osprey, Morgan James, Angry Robot, and Sourcebooks. The team is also working towards deals with some of the bigger publishers, too. While users might not always get their physical books as eBooks for free, Shelfie is the only app to offer this feature and it's more than just a way of getting digital copies as it now incorporates a whole new social aspect, allowing book lovers to see what books other users have on their shelves and what they're reading in digital form thanks to Shelfie.

There are just two things you need to do in order to use Shelfie, one is to download it from the Play Store or from the Apple App Store if you're on iOS, and the other is to have a book case full of books! 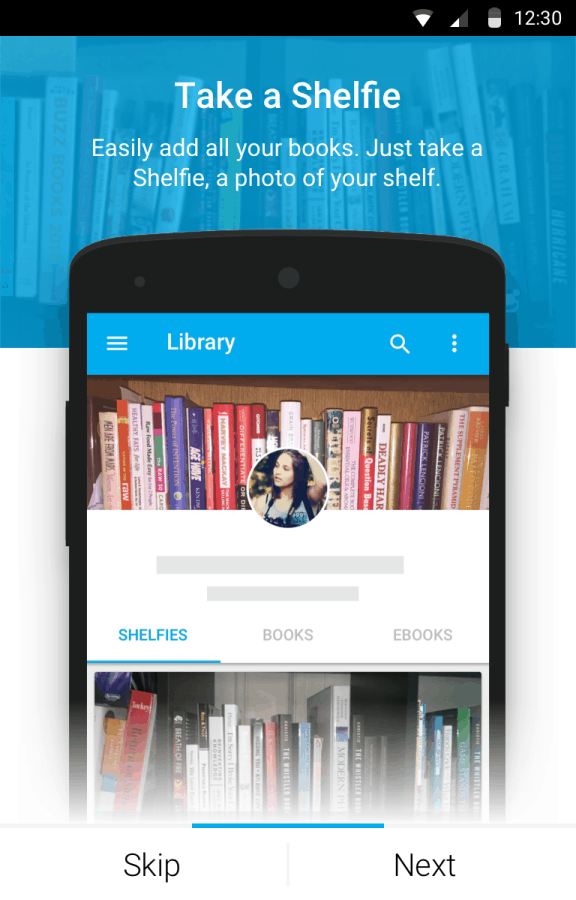 There's an introduction into what the Shelfie app by BitLit is all about, and when you sign in or sign up, you'll be introduced to the new social aspect of the app. 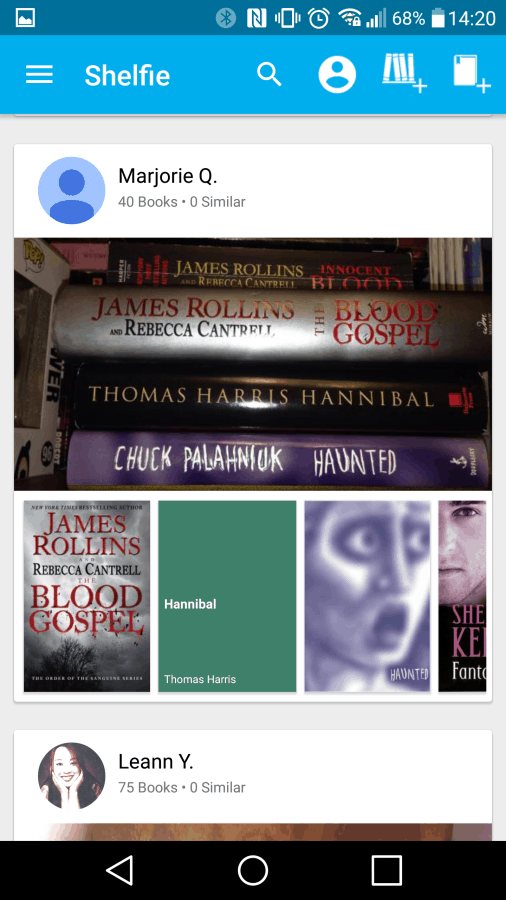 Here, I can see what other users are reading and whether or not they've got a digital copy of their books. In many instances, these users have got some sort of digital copy of their books, and it's nice to be able to see what other people are reading. Soon however, Shelfie will allow users to log in with Goodreads, something avid readers will be happy about. 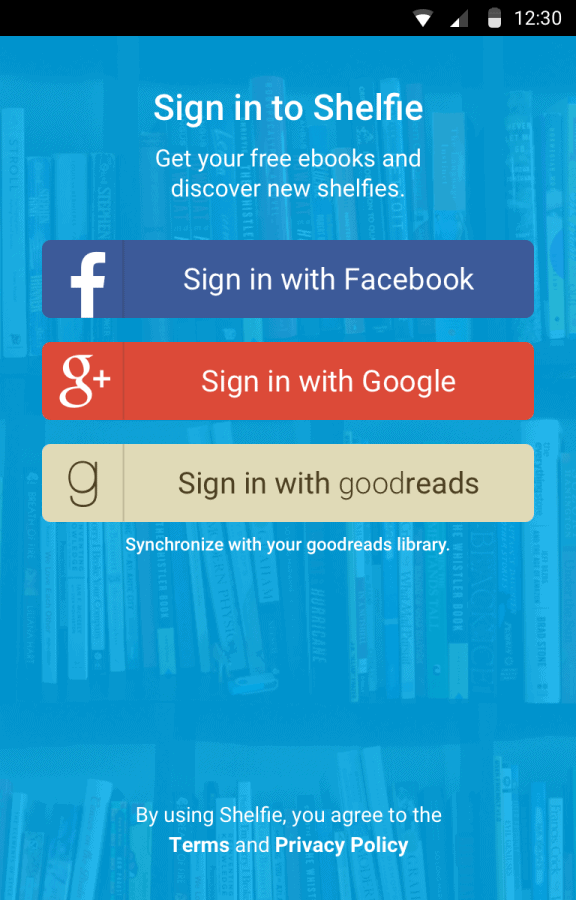 Your next step however is to take a Shelfie of your book case, thankfully there's a neat introduction on how to do this as you get started. 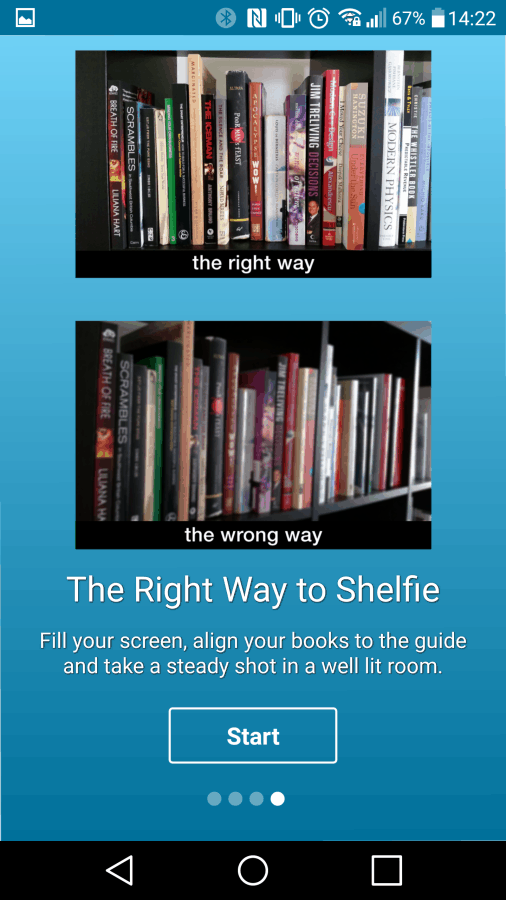 It's pretty straightforward to take a Shelfie, and it doesn't really take long at all to do, you just need to line things up (don't worry, the app focuses very well once you hit the camera button). 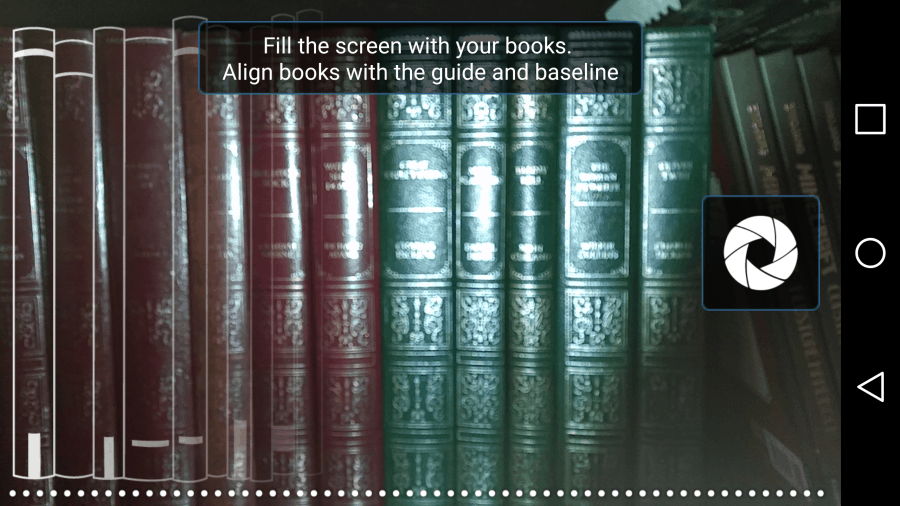 Once you take a Shelfie, you'll be informed of how long it takes to process the books and titles that you've photographed. 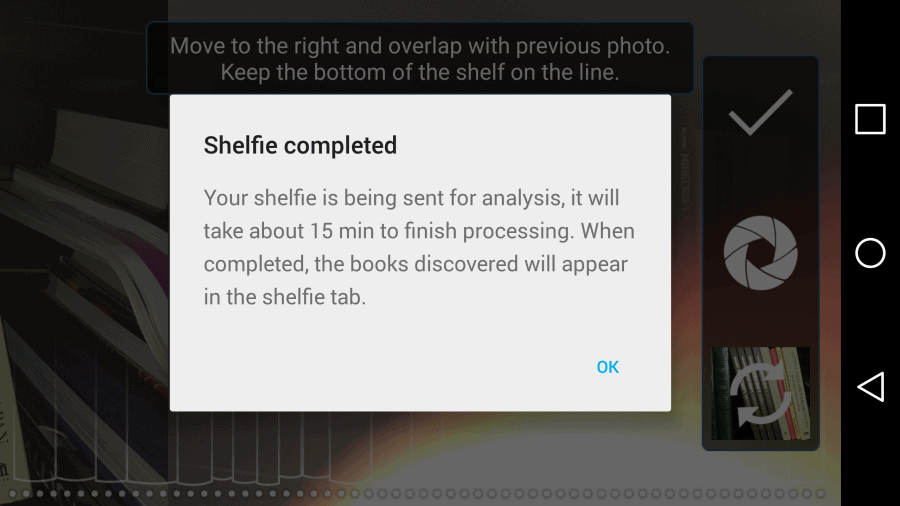 I waited a little bit, probably not long enough, to take a look at my Shelfie and I could already see that the app had started processing and identifying titles on my shelf. 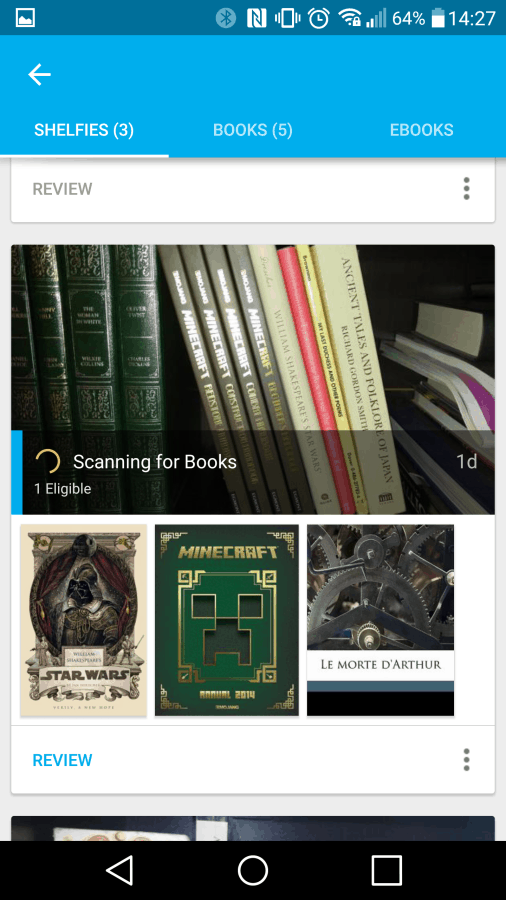 One of my Minecraft books was wrongly identified, but it did manage to accurately identify my Star Wars book from my shelf, but it was sadly not eligible for a digital copy just yet. 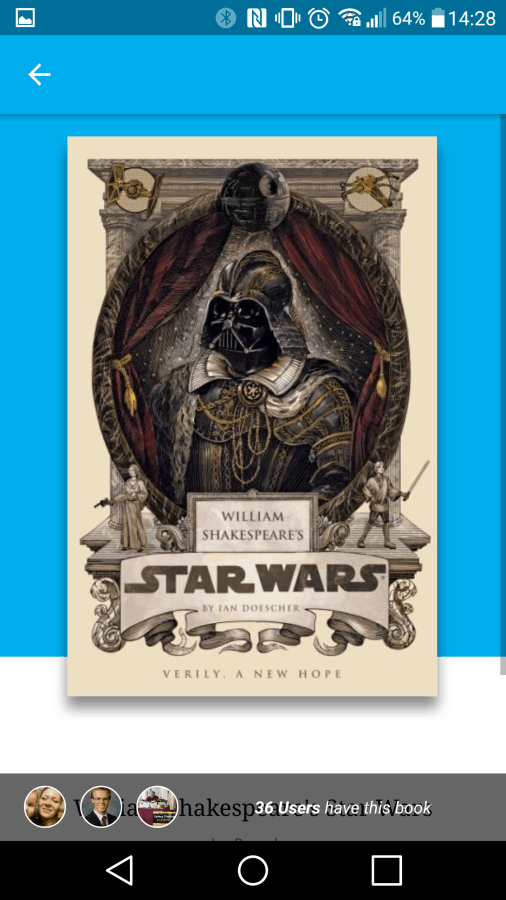 A little later on I was sent an email that informed me of which books had been identified and a few of them were eligible for $0.99 purchases, which while not free, is much cheaper than their $4 price tag normally.

Getting a hold of books can also be done by claiming a book you already done, you could thing of this a singular Shelfie or a "Bookfie", although I don't the term will catch on! 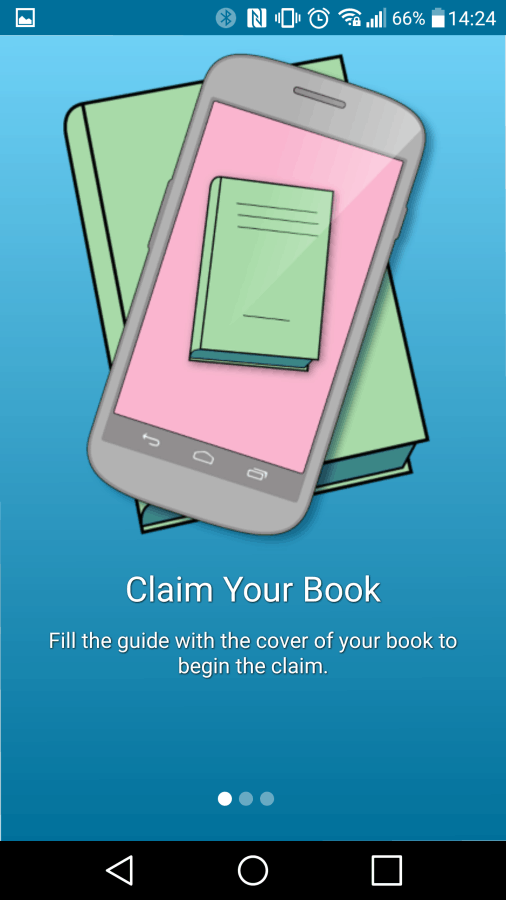 Again, there's a quick and easy tutorial on how to do this as well, and it's as simple as lining things up and then taking a picture. 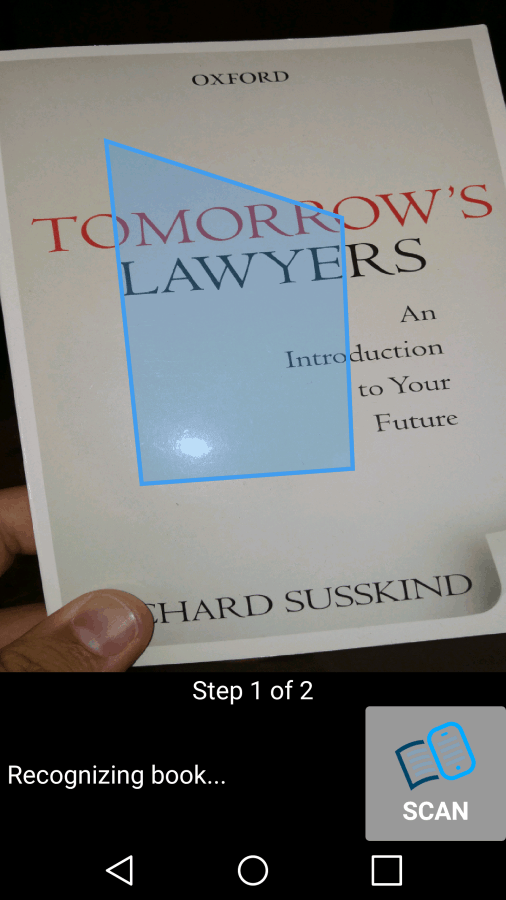 I was informed that the book wasn't recognised and that could be down to a couple of things as the app explained to me: 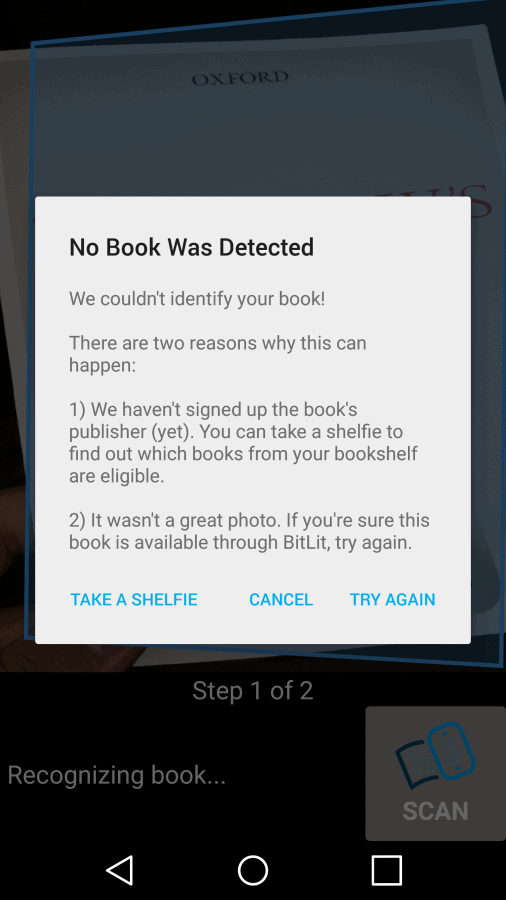 I did take another, better photo, but the result was the same and I was rather surprised to hear that the Oxford University Press weren't included in Shelfie's publisher deals, but you can't win every battle.

For years now there's been a battle over physical versus digital and while we've pretty much accepted that CDs aren't viable when compared to streaming, books are a different thing altogether. We enjoy books, we like showing them off and we like seeing what books our friends and families have packed into their shelves as well. There's a social element to collecting and harvesting as many books as you can, and with Shelfie users can show off their collections no matter how small or large. More than that of course Shelfie can help find you digital copies of books you already own, and while not all of them are free, a good amount of them are. eBooks are great, and for a lot of people on the move they're the best way of sneaking a few chapters here and there. Shelfie by BitLit is a great way of bridging the gap between the two mediums and allows shrewd readers to have their cake and eat it, too.

Overall, Shelfie has a lot going for it and it's a platform that is only going to get better over time. For avid readers, there are few other apps that offer as much freedom and value for money. Digital options have become the norm for a lot of people, but readers are unique in that they have an admiration for the physical book, and Shelfie allows them to have the best of both worlds.