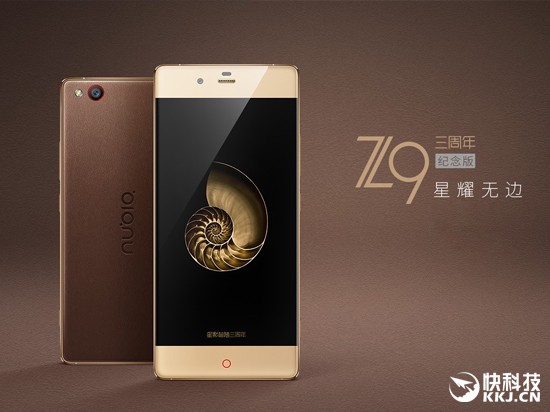 ZTE has been releasing devices non-stop this year. The company has unleashed a number of lower-end offerings, but also quite a few high-end devices in 2015. The Nubia Z9 line of devices has been announced earlier this year, and Nubia Z9 is one of the most compelling ZTE-branded devices to date. The ZTE Axon line of handsets has arrived this year as well, and ZTE has introduced quite a few devices as part of this line, and even the Axon smartwatch is included here. That being said, ZTE has announced a special edition Nubia Z9 handset in China in order to celebrate Nubia's 3rd anniversary, read on.

This new Nubia Z9 device comes with a gold finish, and still looks really sleek as the original, of course, this handset sports the same design as the Nubia Z9 which was announced back in May. The special edition Nubia Z9 sports a 5.2-inch 1080p (1920 x 1080) display by Sharp, along with 4GB of RAM and 64GB of internal storage. This smartphone is powered by the Snapdragon 810 64-bit octa-core SoC along with an Adreno 430 GPU for graphics. The 16-megapixel camera is available on the back of this phone, and an 8-megapixel shooter can be found up front. The camera is actually one of the highlights of this phone, and Nubia's camera software features come pre-installed on this device as well. Speaking of software, Android Lollipop comes pre-installed here with Nubia UI available on top of it. Another thing worth mentioning here is that the device ships with a 2,900mAh battery on the inside.

This device is basically identical to the original Nubia Z9, but it comes in a different color option. The device still doesn't have any bezel on the sides, and because of that offers that sleek premium look. The phone is made out of metal, and below the display you'll notice the 'dot' home button which has become a characteristic of Nubia devices. So, how much does this phone cost? Well, if you guessed that this device is expensive, you're totally right. This special edition Nubia Z9 smartphone costs 3,999 Yuan ($630) in China, in case you're planning to pick one up.