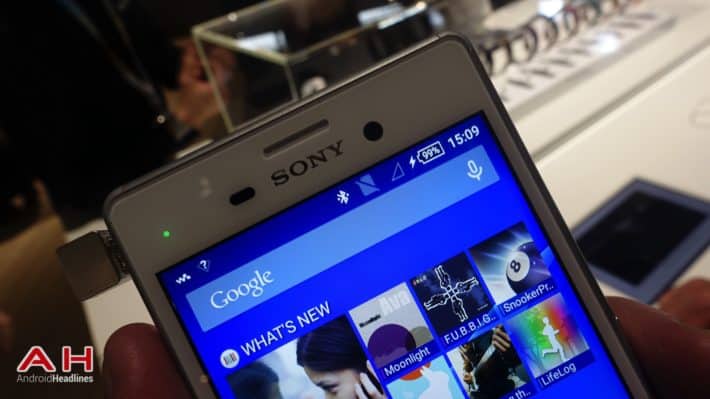 Whenever there are Android updates rolled out by either the manufacturer or the supporting network, they often either update or even include new apps. Recently however, there's been a big controversy over how much space is taken up by unwanted apps on these devices before users have even turned them up. LG and Samsung are consistently found to be some of the worst offenders, but Sony's Xperia M4 Aqua gained a name for itself earlier this year for launching with just 1.26GB of usable internal storage. Considering there's just 8GB on the inside, there was never going to be much to work with, but 1.26GB is less than two-tenths of the overall, advertized storage. Sony is doing a little something about it in their latest update to the device.

For both the single, and dual-SIM versions of the M4 Aqua, Sony has issued fresh updates that actually removes software. The packages that are removed, according to Sony are: Books, CloudPrint, FaceLock, GoogleTTS, Keep, Newsstand, NewsWeather, PlayGames, PlusOne and talkback. This won't apply to everyone however, as these apps will only be removed if you haven't opened the apps or updated them. Essentially, this sort of thing stops users of Google Keep wondering where their favorite app went after applying the update. It's unclear whether or not uninstalling updates from the settings menu will remove these apps or not, but it could be worth a try.

As with the majority of devices that Sony sells, the Xperia M4 Aqua can expand its storage through its microSD card slot, but that's not really the point. 1.26GB of storage is very little to play with, and it won't be long until people start to see the storage warning. This sort of update is a rare one in the world of Android updates, but we doubt it does much to the overall storage solution. It seems strange for someone like Sony to even offer an 8GB smartphone in this day and age, but we suppose budget really does mean budget in some cases. Those with a single SIM Xperia M4 Aqua should look for software version 26.1.A.2.167 while dual-SIM users need to look out for 26.1.B.2.147.